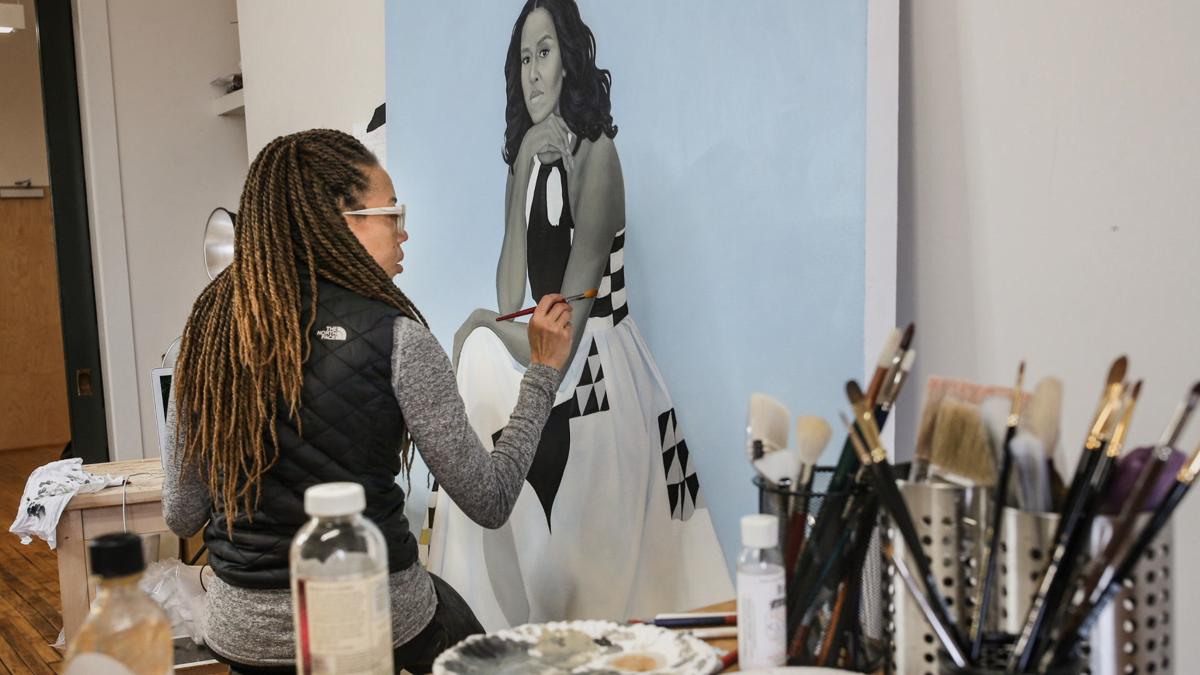 Amy Sherald painting Michelle Obama, as seen in “Black Art: In the Absence of Light,” a new HBO documentary. — HBO 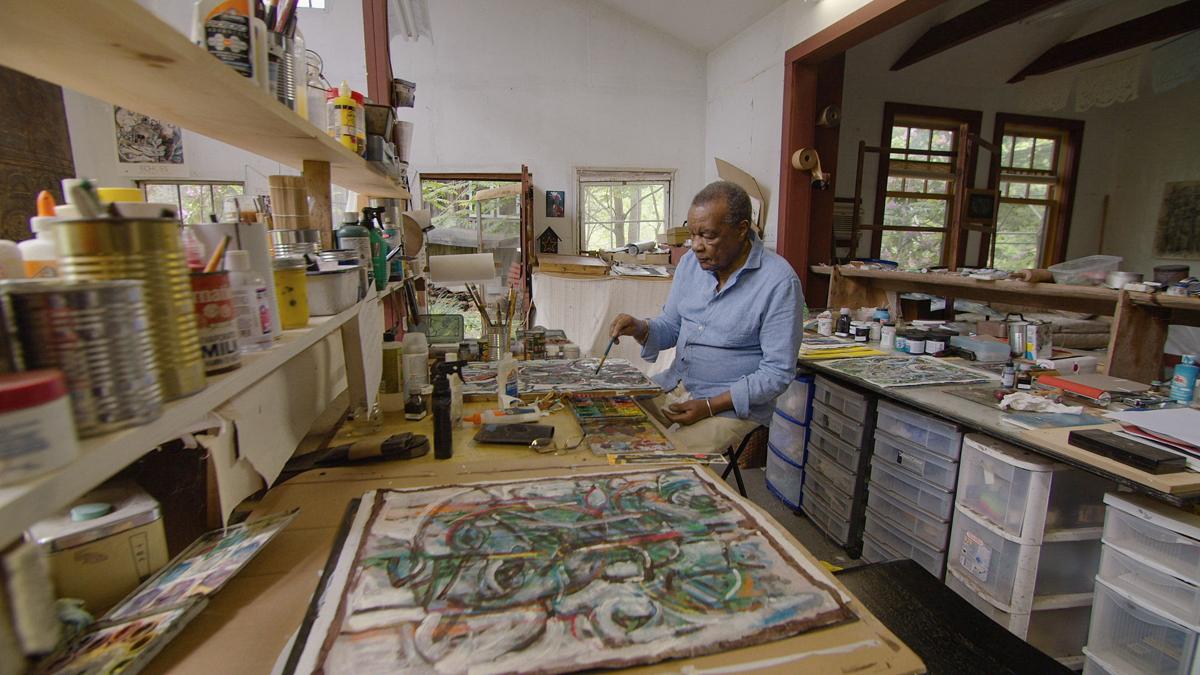 David Driskell in his studio. 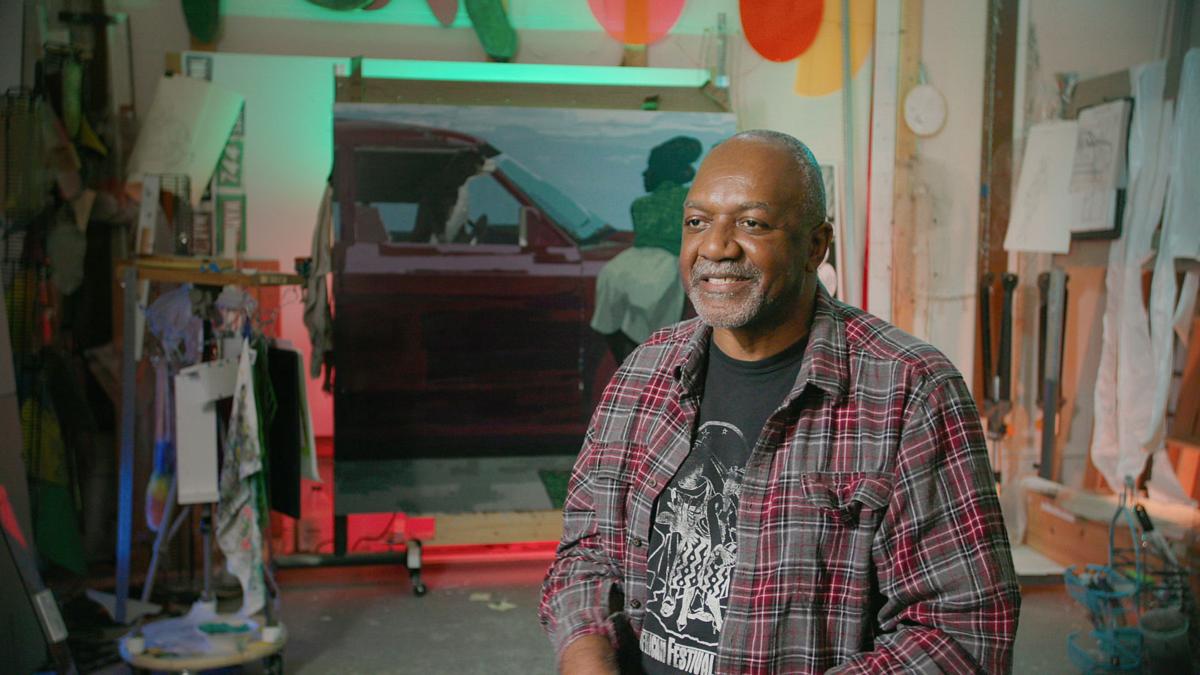 Kerry James Marshall in his studio. 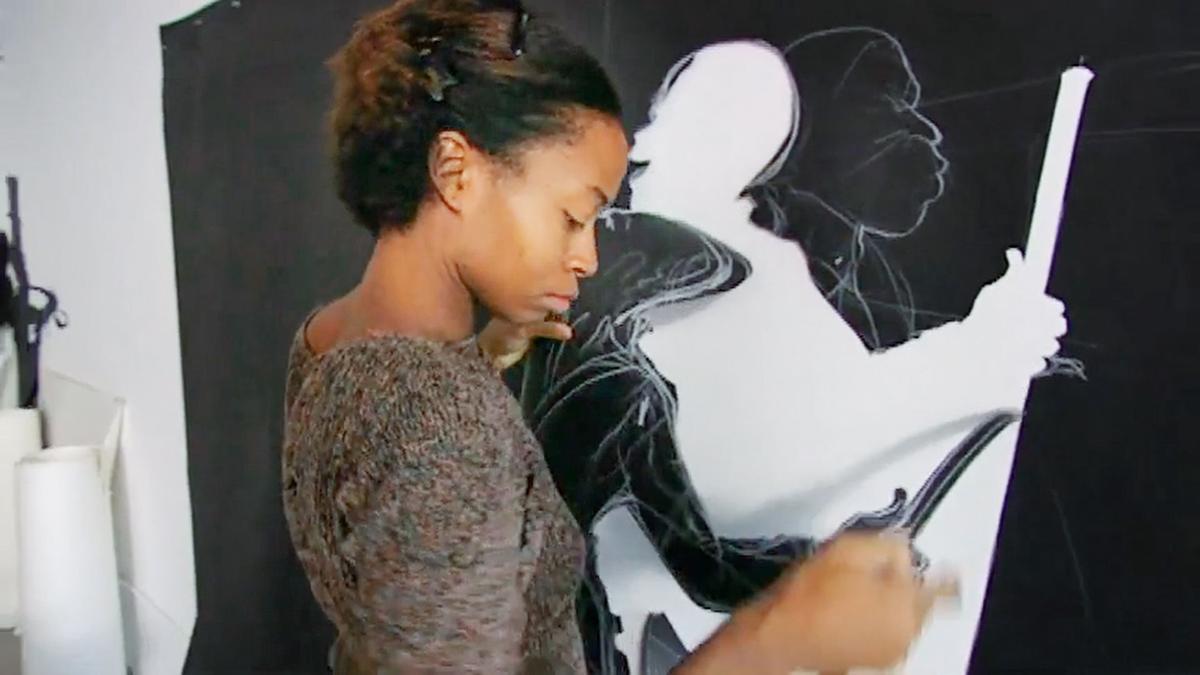 Kara Walker, one of the most acclaimed Black artists of the past two decades, has attracted criticism from others for using incendiary racial stereotypes in her silhouette-based work. 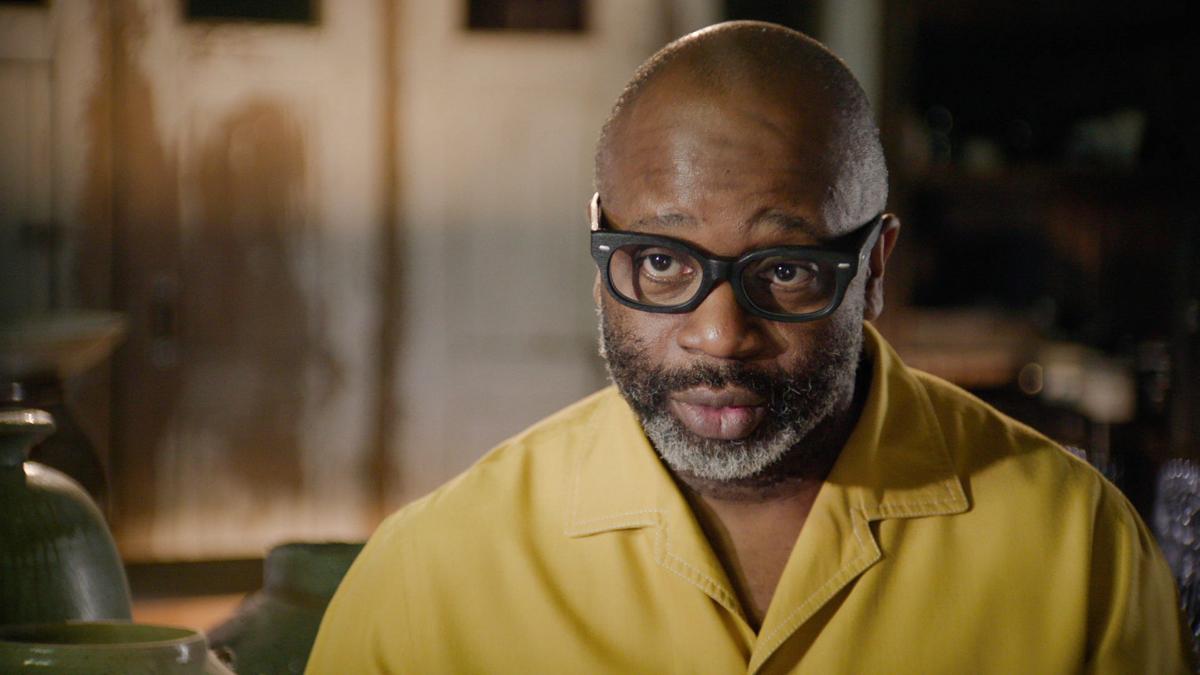 Artist Theaster Gates in “Black Art: In the Absence of Light.” 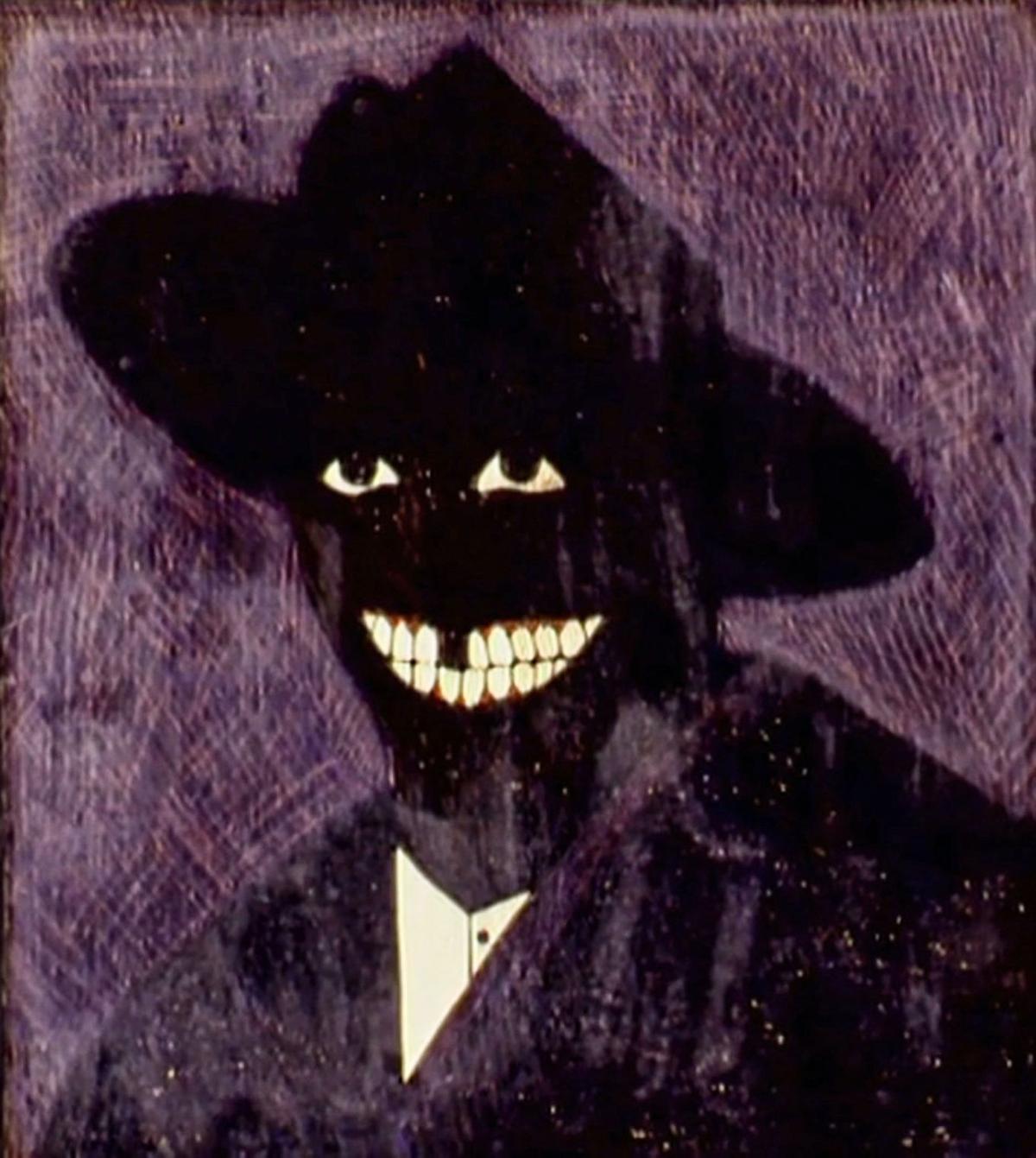 “A Portrait of the Artist as A Shadow of His Former Self” was done by Kerry James Marshall.

Amy Sherald painting Michelle Obama, as seen in “Black Art: In the Absence of Light,” a new HBO documentary. — HBO

David Driskell in his studio.

Kerry James Marshall in his studio.

Kara Walker, one of the most acclaimed Black artists of the past two decades, has attracted criticism from others for using incendiary racial stereotypes in her silhouette-based work.

Artist Theaster Gates in “Black Art: In the Absence of Light.”

“A Portrait of the Artist as A Shadow of His Former Self” was done by Kerry James Marshall.

There were lines down Wilshire Boulevard. The artist Kerry James Marshall remembers seeing things in the packed galleries that he’d only ever seen in books. Nothing like it had ever been staged.

The exhibition, held in 1976, was “Two Centuries of Black American Art.” Its genesis had not been easy: Two white curators at the Los Angeles County Museum of Art resigned when the board approved the proposal. Organized by artist and then university professor David Driskell, the show traveled from Los Angeles to Atlanta, Dallas and Brooklyn, attracting huge attendances at each venue.

A new HBO documentary, “Black Art: In the Absence of Light,” begins with an account of this trailblazing exhibition, including footage from a contemporaneous interview with Driskell by Tom Brokaw, as well as others’ recollections and commentaries.

Directed by Sam Pollard, “Black Art” develops from this extraordinary — if belated — moment in the history of Black cultural visibility into a succinct, extremely watchable introduction to a bunch of powerful living artists who happen to be African American.

Black artists, it should go without saying, are not a monolithic group. Black artists make abstract and figurative art; they take photographs; they make videos, ceramics and sculptures. They are motivated by protest, on occasion, but also by beauty and truth; by technical invention, by confusion and dismay, by yearning and love. Why, then, was a show like “Two Centuries of Black American Art” necessary? And why, almost 50 years on, does a documentary like “Black Art” need to be made?

The answer to the first question is obvious, and Driskell dutifully answers it when it’s put to him by Brokaw: The show was necessary, he says, because of earlier omissions. Because “mainstream” (white) neglect meant that people wouldn’t see the work otherwise. And because without it, the canon would be incomplete.

All true. The best answer to the second question, however, feels subtly different. It has less to do with compensation paid toward an ideal of justice, more to do with sheer cultural energy. “Black Art,” the documentary, cried out to be made because over the past 10 or 20 years, unprecedented resources have gone toward giving the best, the most promising and the most egregiously neglected Black artists their due. The resulting sense of discovery, of mutually reinforcing energies and of excellence brought to the fore is unmistakably a phenomenon. Almost (apologies to Harlem) a renaissance.

The most compelling moments of “Black Art” put us in the company of artists, usually in their studios, sometimes installing works in exhibitions or fielding questions from small kids at openings. Among the artists we hear from are Kerry James Marshall, Carrie Mae Weems, Kara Walker, Radcliffe Bailey and Theaster Gates. Weaving their (and many other artists’) voices are, among others, Sarah Lewis, an associate professor at Harvard University and widely published author; Maurice Berger, the influential art critic who died in March 2020 of heart failure preceded by coronavirus symptoms; and Driskell, whom we see in his studio before his death the following month from covid-19 complications.

All three are eloquent, insightful narrators. Driskell’s long perspective, his generosity toward the younger generation and his righteous delivery are tempered by a beautiful vulnerability revealed in the surrounds of his studio, where he talks unguardedly about influences (primarily Romare Bearden) and the struggle to find his own voice.

Lineage is a big theme. Just as Driskell recounts key conversations with his hero, Bearden, Marshall notes that one of his early teachers was Betye Saar, whose “Black Girl’s Window” was an inspiration for his breakthrough work, “Portrait of the Artist as a Shadow of his Former Self.” Another influence on that work was Ralph Ellison’s “Invisible Man,” which leads Marshall into a lovely disquisition on his momentous realization that “Black is not the absence of color. Black is a particular kind of color.”

The film pans out to address crucial moments in the historical reception of African-American art. A notorious precursor to Driskell’s “Two Centuries” exhibition was a botched attempt in 1969 by the Metropolitan Museum of Art to dedicate an exhibition to Black culture. The show was “Harlem on My Mind.” Disastrously, instead of exhibiting Black art, it presented a socio-historical, almost anthropological view of a New York neighborhood just a few blocks uptown from the museum.

“Two Centuries,” which was explicitly devoted to Black artists, was in many ways a rejoinder to “Harlem on My Mind.” And its impact was enormous. Thanks to pioneers like Driskell, “museums now understand,” Lewis says, “that they need to tell a counternarrative about American life and about Black art. They need to correct what stories haven’t been told.” They also need to make sure the people telling those stories and doing the work of those museums are more diverse because — as the hip-hop artist and prominent collector Swizz Beatz puts it: “We hate the way other people tell our story. There’s always flaws in it because they didn’t live it.”

A key recent moment in the reception of Black art was the 2018 unveiling of the Obama portraits by Kehinde Wiley and Amy Sherald. Both artists are interviewed in their studios in “Black Art.” Sherald, who painted Michelle Obama, speaks beautifully about “the autobiographical ethic that all the most interesting work has.” Addressing the recent surge in interest in African American art, which has been likened to a gold rush, she acknowledges that there are now a lot of galleries and dealers picking up Black artists. But: “I say it’s because we’re making some of the best work and some of the most relevant work.”

“Black Art” comes across as a sober-minded celebration, but it is by no means comprehensive (we hear nothing from some of the most influential Black artists of recent times, including Mark Bradford and David Hammons), nor is it uncomplicated. One of the artists it features — Walker — is feted around the world, but her confrontational subject matter has upset Black communities. They are not quoted on the subject here, but Saar and another prominent Black artist, Howardena Pindell, have sharply criticized Walker’s treatment of racial stereotypes, antebellum violence and sexual humiliation in her silhouette wall pieces, questioning not only the work but the acclaim it has garnered among the White art establishment.

So long as there is racial injustice, the urge to reveal instances of that injustice will conflict with a desire to avoid images of trauma. Cellphones, social media and a prurient culture thirsting for violent images have all contributed to what has been called the “hypervisibility” of images of violence against Black bodies and a consequent urge to recoil from such imagery. That urge is legitimate; the criticisms can and should come. But artists trying to deal with real phenomena — both the violence and the hypervisibility — should not be muted. As fellow artist Sanford Biggers says of Walker: “It’s not always about being appreciated and liked. It’s sometimes about being reviled and criticized.”

The documentary could have done more to delve into these issues. Leaning away from controversy, it touches instead on other crucial aspects of the reception of Black art, from key exhibitions like “Black Male: Representations of Masculinity in Contemporary American Art” at the Whitney Museum in 1994-1995 to the outsize impact of the Studio Museum in Harlem and the effect of ambitious collectors and star power. (Beyoncé and Jay-Z’s video for their 2018 trap song, “Apes--t,” filmed in the Louvre, is presented as a key moment.)

For all the light that is beaming down now on Black artists, Black culture in America continues to be afflicted by a paradox. Its contours were defined in a simple, heartbreaking question once posed by the actor Amandla Stenberg: “What would America be like if we loved Black people as much as we love Black culture?”

Justice and visibility — or vision and justice — are richly linked, as scholars like Lewis and Henry Louis Gates (one of the producers of this documentary; the other was the Studio Museum’s Thelma Golden) have shown. But there are times, too, when we might want to uncouple ends and means and honor them separately.

The belated upswing in attention paid to Black artists is just, in itself — not simply because it may lead to wider justice. In a world beset by celebrity culture and distorted by the bulimic dynamics of social media, we need more than ever to pursue things precisely for themselves. This, I think, is what the artist Theaster Gates, in a powerful homily near the film’s end, is getting at. “We’re part of a continued renaissance,” he acknowledges. But the question that most excites him is: “Do we have the capacity to be great makers in the absence of light? If Blackness has something to do with the absence of light, does Black art mean that sometimes I’m making when no one’s looking?

“I don’t want to work only when the light comes on,” he continues. “My fear is that we’re being trained and conditioned to only make if there’s a light. And that makes us co-dependent upon a thing that we don’t control. Are you willing to make in the absence of light?”