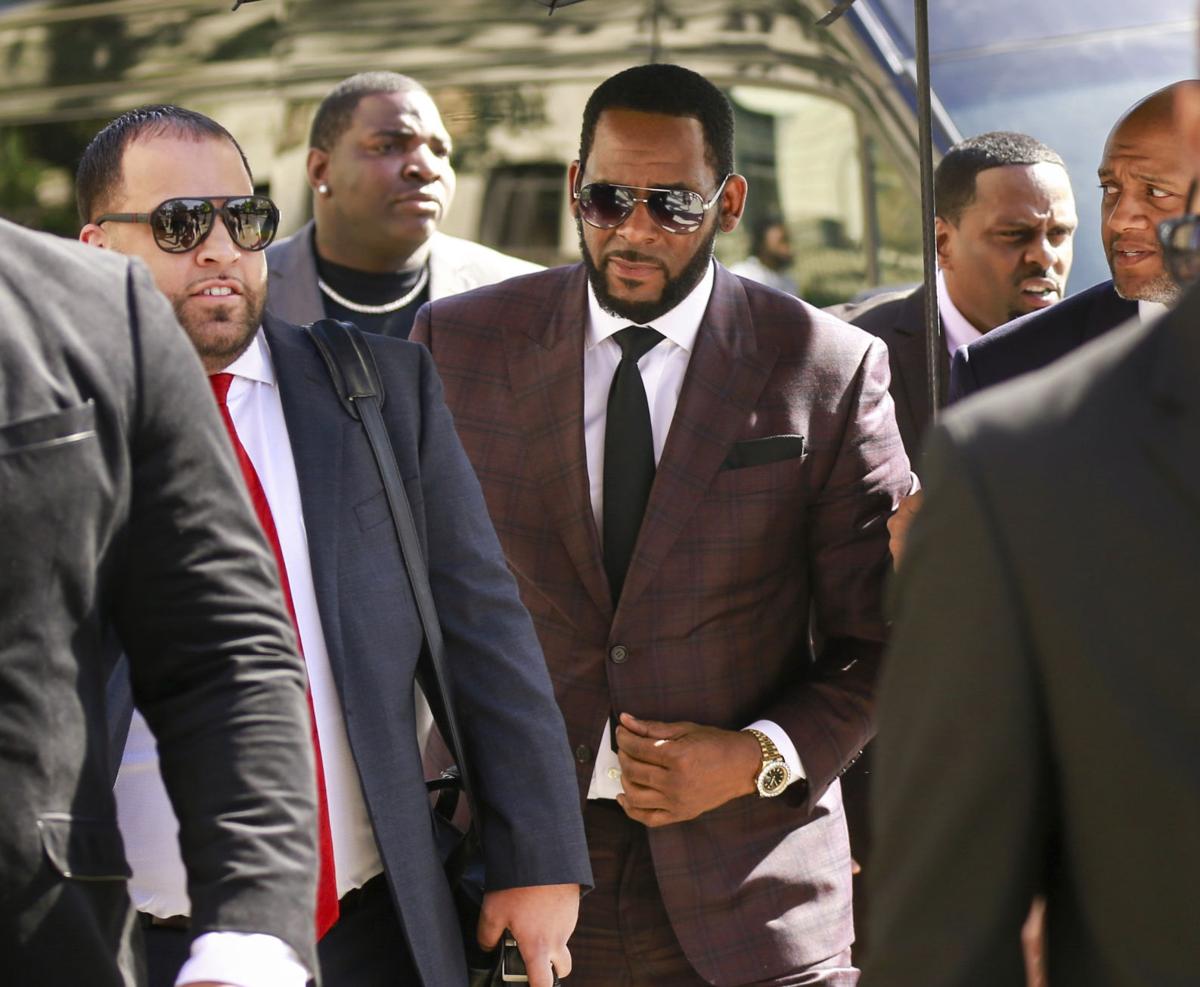 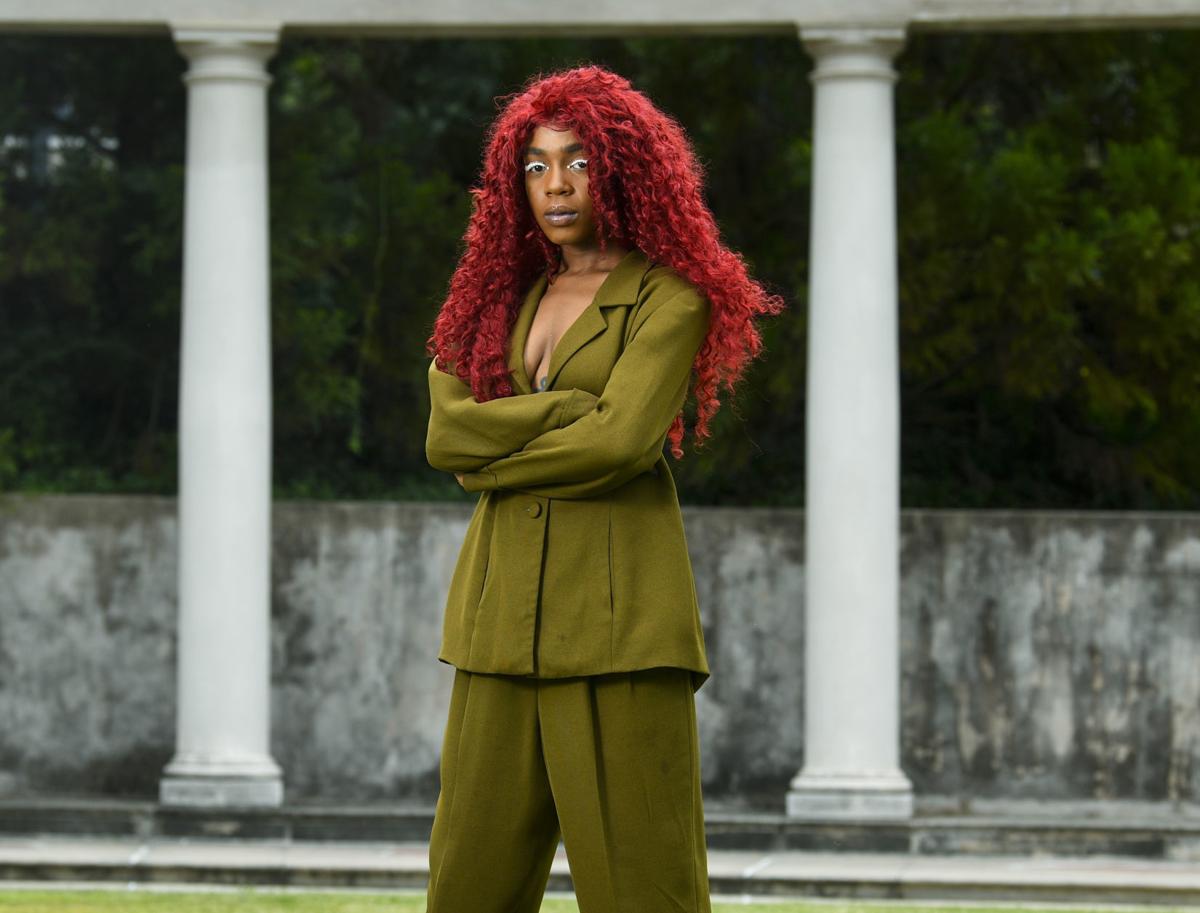 Music artist Buku Abi, born Joann Kelly, posing in Atlanta. As the daughter of R. Kelly, she experienced her fair share of hardships. She is no longer in touch with him and says being R. Kelly’s daughter is like “a double-edged sword.” In March, Abi released her debut EP “Don’t Call Me” and she appeared on the WEtv reality series, “Growing Up Hip Hop: Atlanta.”

Music artist Buku Abi, born Joann Kelly, posing in Atlanta. As the daughter of R. Kelly, she experienced her fair share of hardships. She is no longer in touch with him and says being R. Kelly’s daughter is like “a double-edged sword.” In March, Abi released her debut EP “Don’t Call Me” and she appeared on the WEtv reality series, “Growing Up Hip Hop: Atlanta.”

NEW YORK — For a long time, Buku Abi ran away from pursuing music.

Although she is the daughter of one of pop music’s most popular and successful singer-songwriters, her father is also among the most infamous: He is R. Kelly, currently in jail, facing multiple charges of sexual abuse and sex trafficking.

“I think you get to see a different side of it than somebody who sees it from the outside and gets to see the glitz and glam. I got to see the hell part of it,” said 21-year-old Abi, born Joann Kelly, in a recent interview with The Associated Press. “I didn’t want to be in the industry.”

Even before she was born, her father was under scrutiny for his interactions with young women: He had secretly married his then-protege, Aaliyah, when the late R&B sensation was just 15 in 1994. But by the time Abi was a child, while Kelly was still a multiplatinum star raking up hit after hit, he was also on trial, accused of child pornography (he would eventually be acquitted in 2008).

Abi said going to public school for the first time as an early teen was challenging — there she heard stories about her father that she had not heard before.

“At home it’s normal, you’re living a life with your parents; your dad and mom aren’t going to go into all the bad things that might be going on outside of home,” she said, “but kids in school don’t necessarily care. Fifth and sixth grade is when I started learning the sore part of it, the not so good part. I think that was the hardest part for me because for so long I went with this image of who my dad (was) and what my family (was).”

Things were so bad in school, she even contemplated suicide. But though school is where her life almost ended, it’s also where she felt it truly began: She recalls singing onstage in high school during a performance, which she said “literally felt like drugs.”

“I needed more of this,” she added. “Clearly I can’t keep running from this anymore. Ever since then, I’ve been in it and it’s literally saved my life.”

Entering the music business comes with a different challenge for Abi: She can’t escape the fact that R. Kelly is her father. She is no longer in touch with him and says being his daughter is like “a double-edged sword.”

“I definitely run across challenges — people wanting to work with me to spite him or people not wanting to work with me just because of who he is,” she said. “I’ve definitely come across turmoil ... being judged for really no reason at all, just based off associations. I’ve been pushing through it. Me making the art, it saved my life so there’s nothing really that would be able to stop me.”

Abi decided not to use the name her parents gave her in her career. She settled on the stage name Buku Abi about three years ago after first going by the name Ariirayé. In the last five years she’s been hard at work on her debut EP, “Don’t Call Me,” released this March. Her sister Jaah Kelly produced the album, which echoes SZA and other millennial artists in the alternative R&B world.

When it comes to making music, she doesn’t deny that’s where she and her father connect: “There’s a lot about him as an artist that inspires me.”

“He has made mistakes in his life and other things that he’s dealing with, but when it comes to that, I can’t take that away from him,” she said. “That’s the one thing that will always keep us connected.”

Abi once thought she and her father would mend things. Under her former stage name Ariirayé, she collaborated with him on the song “Wanna Be There,” a plea to restore their broken relationship. It appears on his 2015 album, “The Buffet.”

“When you conquer the world I just wanna be there/But no matter how successful baby girl/When you need someone to lean on I just wanna be your shoulder,” R. Kelly sings to Abi on the song.

“At that time I was in a place where I was genuinely trying to have a relationship with my father,” she said. “But it was so complicated at that time, as it always is. It was a great experience, I’m glad that I did it, but it just wasn’t like what everybody assumed, and that’s the part that sucks. It wasn’t this big kumbaya moment.”

R. Kelly is currently in a Chicago jail. He pleaded not guilty in federal court to charges that he sexually abused women and girls who attended his concerts there. He has been accused of using his fame to recruit young women and girls into illegal sexual activity, and has also been charged in Chicago and Minnesota for separate incidents. While he had been dogged by allegations that he abused women for years (a charge he denies) , scrutiny from January’s highly rated Lifetime documentary “Surviving R. Kelly,” which detailed multiple allegations against him, led to new investigations and new charges (among his legal troubles is also a backlog in child support for his children, including Abi).

Abi said she tries not to pay attention to the daily updates about her father: “I don’t let that be a part of my every day (life).” — (AP)

“(We) don’t have a relationship, so it’s not like me to check in on him,” she said. “I don’t personally go look it all up and read. I keep myself out of it.”

“Just watching my baby grow into this young woman and be unapologetic about who she is and what she stands for and what she believes, really just being her own artist and owning her artistry and not coming out trying to be or ride the tail of being R. Kelly’s daughter — she’s really going at this alone and that’s what brings her pride,” Drea Kelly said. “I’m elated.”

But Drea Kelly, who was featured in “Surviving R. Kelly” and has accused her former husband of domestic abuse, has also been disheartened by what she sees as the public blaming Abi for Kelly’s alleged misdeeds.

“If your mom has an addiction, should everybody judge you off your mom’s addiction? ... Everyone would say no, but then why is it OK for people to do it to my children simply because of who he is?” said Kelly, who has three children with the singer. “I’ve taught Buku, I’ve taught all my children ... you don’t wait for the world to give you a shot, you go out there and take your shot.”

Abi says the foul words she heard in school that almost caused her to end her life has prepared her for what’s to come: “Growing up has given me an armor, almost.”

“I just want people to know that, at the end of the day, the stereotypes that you may have for other people, whether it be about race, sexuality, their financial status, don’t judge a book by its cover because nine times out of 10 you’re completely wrong,” she said. “I want to be an example of that.” —

LOS ANGELES  — Johnny Gill might be considered an old-school crooner these days, but age has only been a number for the R&B veteran who is…

One of R. Kelly's few defenders says she was his victim, too

Over the last year, as singer R. Kelly was accused of emotionally abusing women and having sex with underage girls, his two live-in girlfriend…