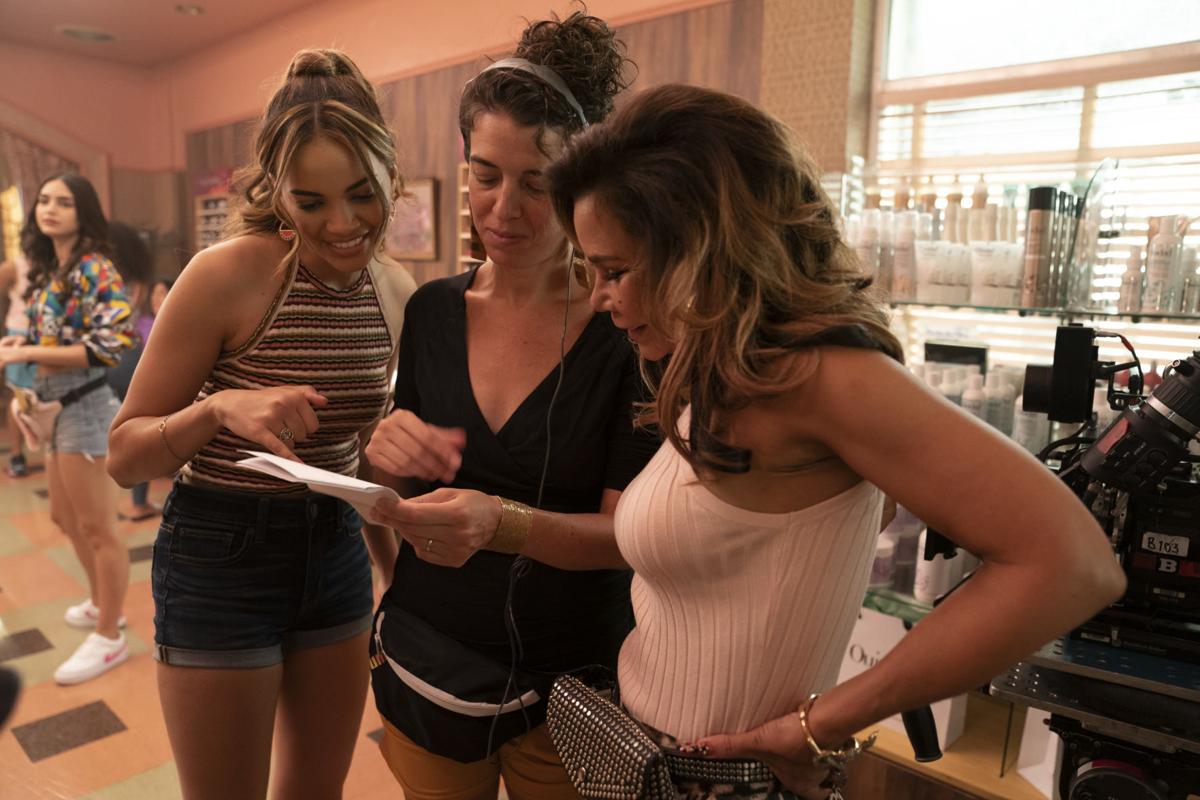 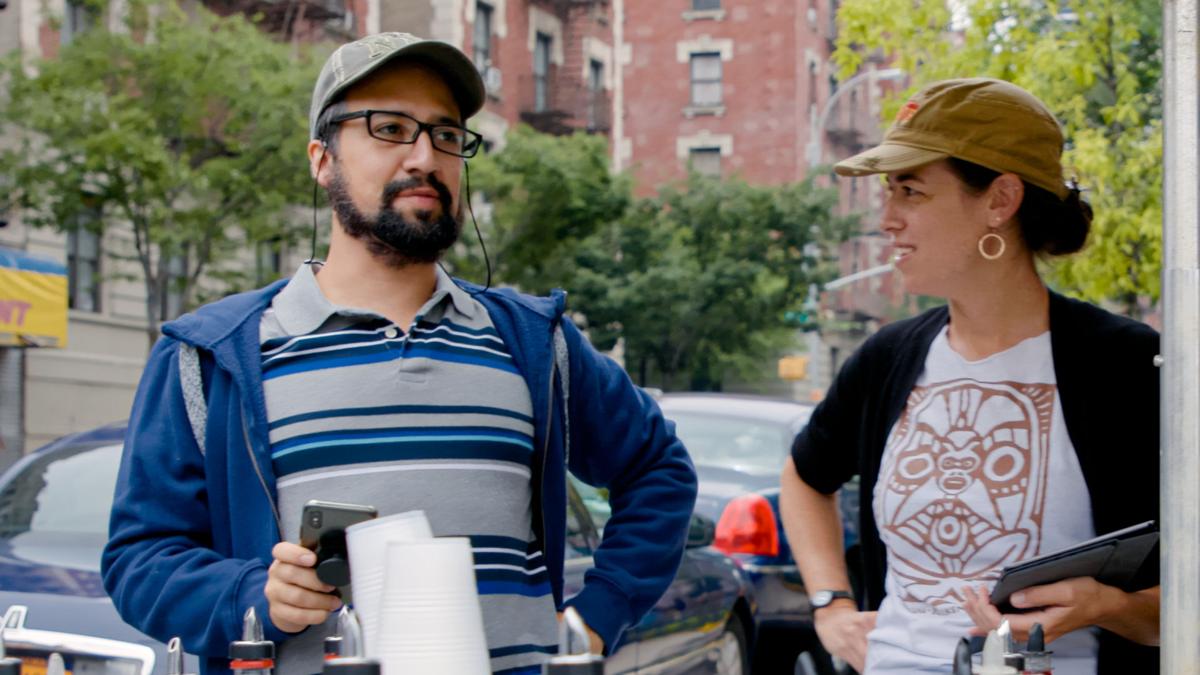 Concept/music and lyrics/producer Lin-Manuel Miranda, left, and Quiara Alegria Hudes on the set of Warner Bros. Pictures’ “In the Heights.” 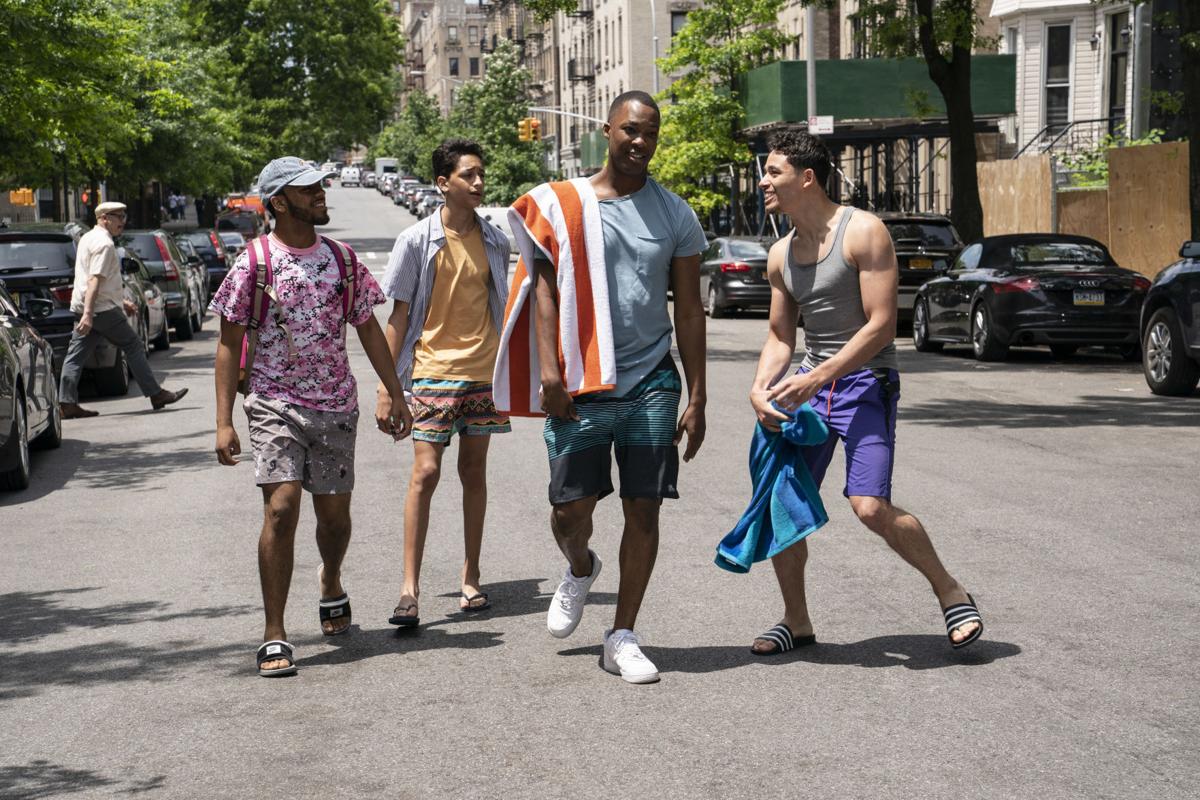 Noah Catala as Graffiti Pete, from left, Gregory Diaz IV as Sonny, Corey Hawkins as Benny and Anthony Ramos as Usnavi in “In the Heights.”

Stephanie Beatriz as Carla, center from left, Daphne Rubin-Vega as Daniela and Dascha Polanco as Cuca in “In the Heights.”

Concept/music and lyrics/producer Lin-Manuel Miranda, left, and Quiara Alegria Hudes on the set of Warner Bros. Pictures’ “In the Heights.”

Noah Catala as Graffiti Pete, from left, Gregory Diaz IV as Sonny, Corey Hawkins as Benny and Anthony Ramos as Usnavi in “In the Heights.”

Stephanie Beatriz as Carla, center from left, Daphne Rubin-Vega as Daniela and Dascha Polanco as Cuca in “In the Heights.”

Quiara Alegría Hudes may have written “In the Heights,” a Tony-winning musical and now movie about the New York Neighborhood of Washington Heights, but she’s a Philly girl through and through.

The playwright, author and lyricist said she doesn’t know where she would be without her Philadelphia roots.

“I had creative writing teachers at Central High School that helped me make my dreams a little bit more of a path. I worked with Philadelphia Young Playwrights, which put on one of my plays in 10th grade. So I had these dreams and the places in Philadelphia helped nourish those dreams,” Hudes said.

The West Philadelphia native said the strong sense of community she experienced growing up here can found in “In the Heights,” which hits theaters and HBO Max on June 10. Hudes said she especially felt that sense of belonging during her days at Central High School.

“One of the things I loved about Central, which I think is captured in the movie, ‘In the Heights,’ is that you’ve got the best of the city coming from all the neighborhoods. And so there’s a sense of pride in the community we made and built together there. Even when we went home to our little separate pockets that night, for a few hours in the day at Central, we made our own special community there,” she said.

Hudes said the best parts of the Philadelphia arts community can be found in her work on “In the Heights.”

“The first thing that popped into my head is the artists that would just play out on the street for free growing up. When I was in Philly, there was Adi Mukumba, who would make recycled instruments out of trash. He would just do a concert for the kids for free after school,” she said.

Also, some in that artist community went on to become household names.

“Even The Roots back then ... they had like a bucket on the street corner, and were singing ‘pass the popcorn.’ I do think of these artists that are in the spirit of community. They’re not artists locking themselves in a room and closing themselves off from people but bringing the art out to the people,” Hudes said.

All of the “In The Heights” characters have a dream that they are trying to make come true.

For Hudes, following her dream of going from a sing-through of “In the Heights” 20 years ago in Lin-Manuel Miranda’s parents’ living room to major Hollywood production was a little daunting.

“I would say the hurdles would be the limits that I can sometimes put on my own imagination. John Chu, the director, was like ‘we’re not making an indie movie,’ by the way, no shade. I love indie movies, I grew up going to the Ritz at the Bourse. He said ‘This is a story about community, this is the American story and this is a Hollywood story, so we’re going to dream big. We’re going to make it as big as possible.” she shared.

At times it was difficult for Hudes to find a balance between the soon-to-be summer blockbuster and the heartfelt moments of the play.

“It was tough to maintain the heart of really tender moments, for instance, Abuela Claudia, one of the elders, counseling a college student who had a really rough time and felt very isolated as a first-generation Afro Latina student at Stanford. It was interesting having these intimate moments of sharing and culture and nourishment, you know, framed by this huge Hollywood, with some vibrant hip-hop and street dance mixed in,” she said.

When she was struggling, the playwright looked to her childhood growing up in Philadelphia for some inspiration.

“One of our characters in the movie is a graffiti artist. His name is Pete and he paints murals. And in the end, one of the murals he paints changes the future of the community forever,” Hudes said. “I thought about the Philly murals I grew up looking at. One of them that comes to mind was around 22nd and Mount Vernon. There was the Statue of Liberty and she had the Puerto Rican flag in her crown. I would look at that and it would tell me something about who I was. And I think that spirit is in ‘In the Heights’ too.”