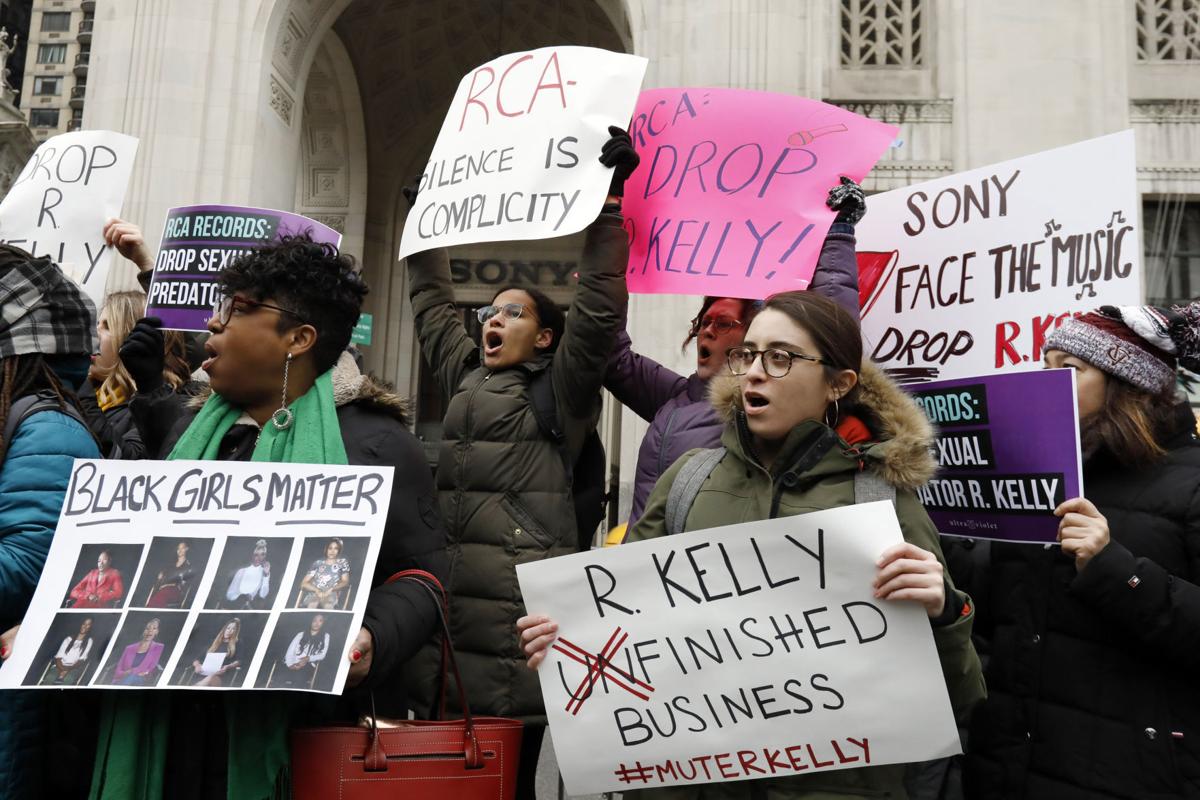 Demonstrators chant during an R. Kelly protest outside Sony headquarters, in New York, Wednesday, Jan. 16, after the airing of a Lifetime documentary “Surviving R. Kelly .” 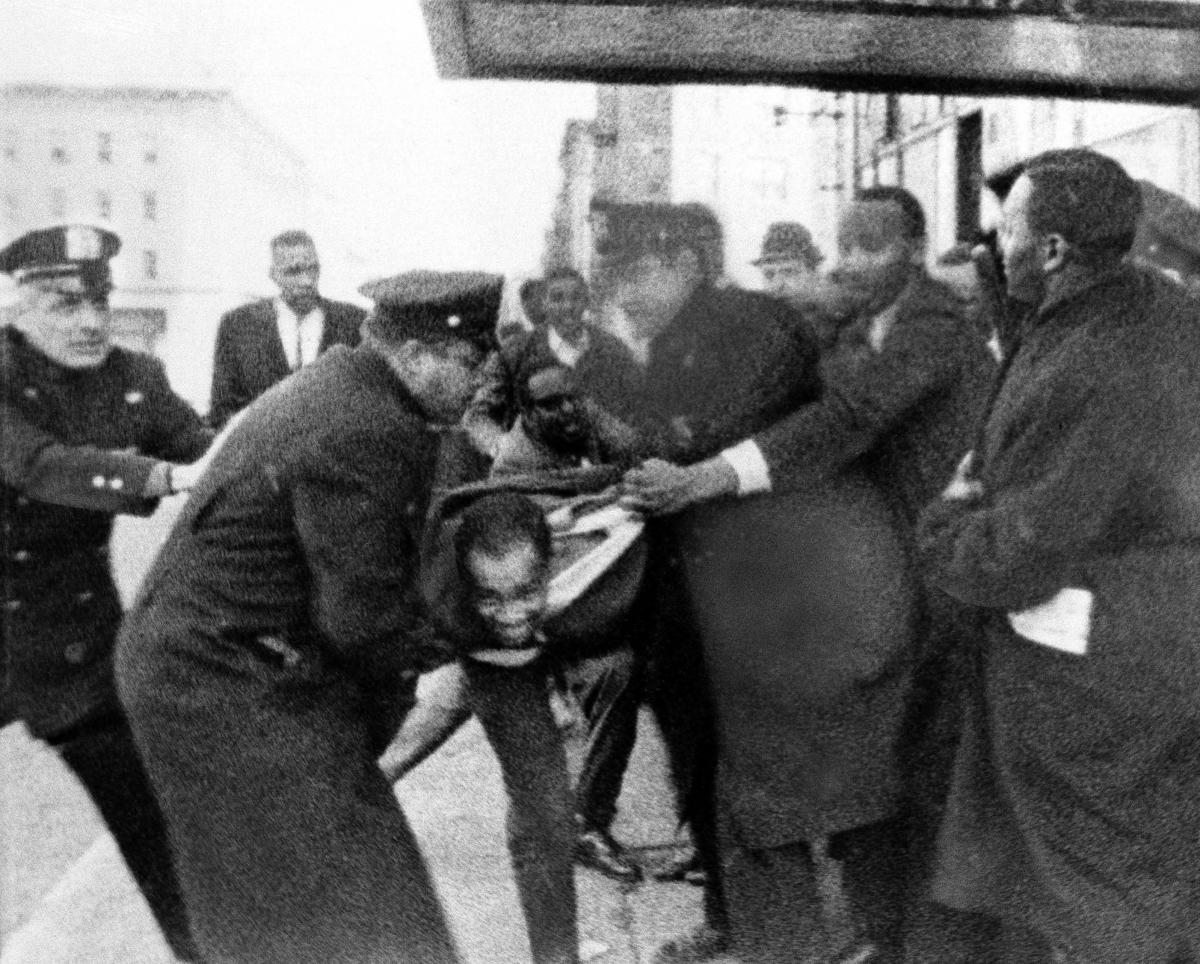 This photo, released by WCBS-TV, shows Thomas Hagan, 22, struggling with police who take him from the scene outside the ballroom where Malcolm X was shot and killed in New York, Feb. 21,1965. Two men convicted in the assassination of Malcolm X are set to be cleared after more than half a century, with prosecutors now saying authorities withheld evidence in the civil rights leader’s killing, according to a news report Wednesday, Nov. 17, 2021. —WCBS-TV News, AP Photo/File 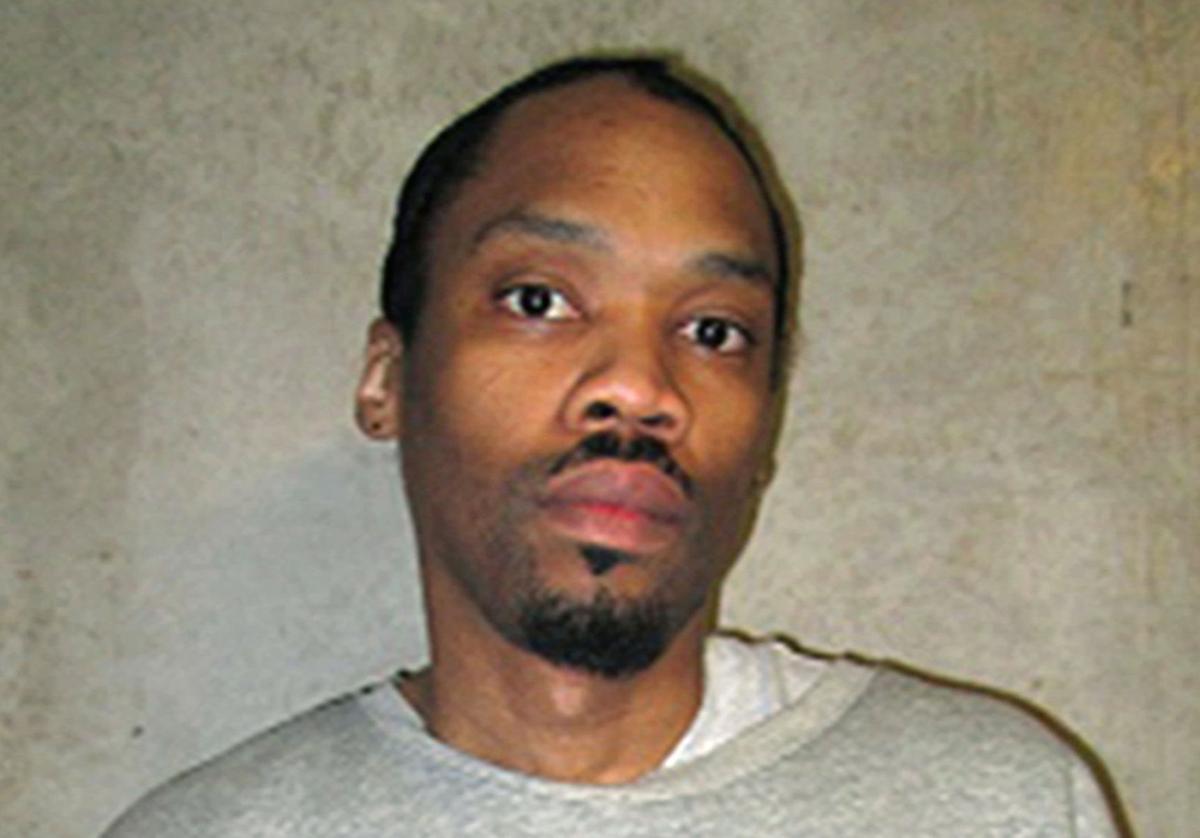 This photo provided by the Oklahoma Department of Corrections shows Julius Jones Feb. 5, 2018, file. Oklahoma Gov. Kevin Stitt has agreed to commute the death sentence of condemned inmate Julius Jones, who was convicted of murder for a 1999 killing. Stitt announced his decision on Thursday, Nov. 18, 2021, the day of Jones’ scheduled execution.

Demonstrators chant during an R. Kelly protest outside Sony headquarters, in New York, Wednesday, Jan. 16, after the airing of a Lifetime documentary “Surviving R. Kelly .”

This photo, released by WCBS-TV, shows Thomas Hagan, 22, struggling with police who take him from the scene outside the ballroom where Malcolm X was shot and killed in New York, Feb. 21,1965. Two men convicted in the assassination of Malcolm X are set to be cleared after more than half a century, with prosecutors now saying authorities withheld evidence in the civil rights leader’s killing, according to a news report Wednesday, Nov. 17, 2021. —WCBS-TV News, AP Photo/File

This photo provided by the Oklahoma Department of Corrections shows Julius Jones Feb. 5, 2018, file. Oklahoma Gov. Kevin Stitt has agreed to commute the death sentence of condemned inmate Julius Jones, who was convicted of murder for a 1999 killing. Stitt announced his decision on Thursday, Nov. 18, 2021, the day of Jones’ scheduled execution.

Phil Bertelsen was at home on his sofa last week when the call he had barely even dared to hope for lit up his phone. An attorney gave him the news: “Who Killed Malcolm X?,” the documentary series Bertelsen made with Rachel Dretzin, had not only debunked a long-accepted narrative about two of the three men charged in the civil rights leader’s death — it had also helped overturn their convictions.

Bertelsen was elated. But the news was embargoed. So for the next full week, he was “like a tiger in a cage,” he said. Still, “I was just so filled with energy and emotion and relief.”

Produced by Fusion TV, the six 43-minute installments of “Who Killed Malcolm X?” raise a number of questions about the investigation of the titular leader’s death in 1965. Muhammad A. Aziz and Khalil Islam were convicted (alongside a third man, Mujahid Abdul Halim) and though both maintained that they were innocent, each spent more than two decades in prison. But in response to the attention that “Who Killed Malcolm X?” garnered when it premiered on Netflix in 2020, the Manhattan District Attorney’s Office reexamined the case.

Islam was paroled in 1987 and died in 2009. Aziz, 83, who was released from prison in 1985, reported to the New York courthouse Thursday to be formally exonerated — the same one where he was sentenced more than 50 years ago. Present in the courtroom, alongside family members of Aziz’s and Islam’s, were the filmmakers, Dretzin and Bertelsen.

The events of this week mark “Who Killed Malcolm X?” as the latest in a string of “history, revisited” documentaries that have spurred public reckonings and changes within the justice system. These projects have ushered in an extraordinary new era of filmmaking — one in which projects may be assessed not just on the merits of their creation but on the magnitude of the action they inspire.

“The Jinx,” HBO’s 2015 series about Robert Durst, who has been accused of committing three murders, revealed footage of the real estate heir appearing to confess. Prosecutors quoted that footage in the opening statements of his ensuing trial, and Durst was convicted in September of the first-degree murder of a close confidante. (In October, just after being sentenced to life in prison without parole, he was charged with murder in connection with the 1982 death of his first wife. In 2003, Durst was acquitted for the killing of his neighbor in 2001.)

Later came Lifetime’s 2019 project “Surviving R. Kelly,” which featured disturbing testimony from women who accused the singer of sexual and emotional abuse, including several who became sexually involved with Kelly when they were underage. Months later, Kelly was charged, and in September, a jury in New York found Kelly guilty on nine federal sex trafficking and racketeering charges.

February’s “Framing Britney Spears,” an episode of the documentary series “The New York Times Presents” released by Hulu and FX, brought to light details of the unusual conservatorship arrangement that had quietly held the titular pop singer under the control of her father and various other conservators for more than a decade. The ensuing publicity — and a wave other Spears-related documentaries — helped bring about the termination of the conservatorship earlier this month.

And just this week, Oklahoma Gov. Kevin Stitt, R, commuted the death sentence of 41-year-old Julius Jones, who spent nearly 20 years on death row for the shooting of an Oklahoma City businessman and would have faced execution soon. Jones’s case was featured in the 2018 ABC docuseries “The Last Defense,” executive produced by the Oscar-winning actress Viola Davis, and Jones soon could count celebrities such as Kim Kardashian West and Cleveland Browns quarterback Baker Mayfield among the many vocal defenders of his innocence.

The Malcolm X filmmakers Dretzin and Bertelsen began their project in 2017, when they met Abdur-Rahman Muhammad, an independent scholar who had been researching Malcolm X and his death for more than a decade. They started filming “Who Killed Malcolm X?” the following year, with Muhammad’s research heavily informing the documentary’s direction.

The series was in production in 2019, during the R. Kelly saga; the construction of the documentary-to-courtroom pipeline was underway. Still, Dretzin said, “I don’t think it occurred to me personally, that early, that they might actually reopen this case.”

The filmmakers were initially focused on the man many suspect actually did assassinate Malcolm X — Al-Mustafa Shabazz, also known as William Bradley. “That was really our focus, exposing him and trying to get to the bottom of that rumor,” Bertelsen said.

They changed course, though, after he died in 2018. “We kind of realigned our intention to those who didn’t kill Malcolm,” Bertelsen said. “That’s when it occurred to us to file this petition with the conviction integrity unit at the Manhattan D.A.’s office.” (Shabazz denied he killed Malcolm X, and his lawyer has denied it as well.)

Bertelsen has a trifurcated theory for how unscripted projects came to exert so much influence. First: “From a business standpoint, we all understand that documentary and unscripted content is popular now because it’s affordable. Networks who are desperate for content can get a lot of it for less,” he said. Second, as a natural result of a bigger, more varied pool of documentary projects viewers can watch and usually stream any time at home, “more people are going to love and appreciate the genre.”

Third “is just technology itself and the kind of pervasive use of social media,” he said. “People can really congregate around something.”

The trend also includes documentaries like 2019’s “Leaving Neverland” and this year’s “Allen v. Farrow,” both airing on HBO, which delved more deeply into the long-standing sexual abuse allegations against pop singer Michael Jackson and legendary film director Woody Allen, respectively. The projects incited reevaluations of their subjects and their entire bodies of work.

Dretzin and Bertelsen realize, of course, that the flurry of highly consequential nonfiction projects could raise the stakes for documentarians in the future. “It’s very competitive. The stuff that tends to sell, the stuff that’s really going to pop, is going to break news,” Dretzin said. “There is a kind of sweet spot for content that taps into a subject that’s familiar in a new, unfamiliar way, with new information.”

The impact of “Who Killed Malcolm X?” may raise the stakes for its two filmmakers as well.

“Having worked on a piece like this — where it felt like it really matters, like we really have the ability to make a difference — I think my patience for projects that don’t feel that way is just going to get shorter and shorter,” Dretzin said with a laugh. “My bar’s just going to be that much higher about taking on projects that I really care about, in one way or another.”