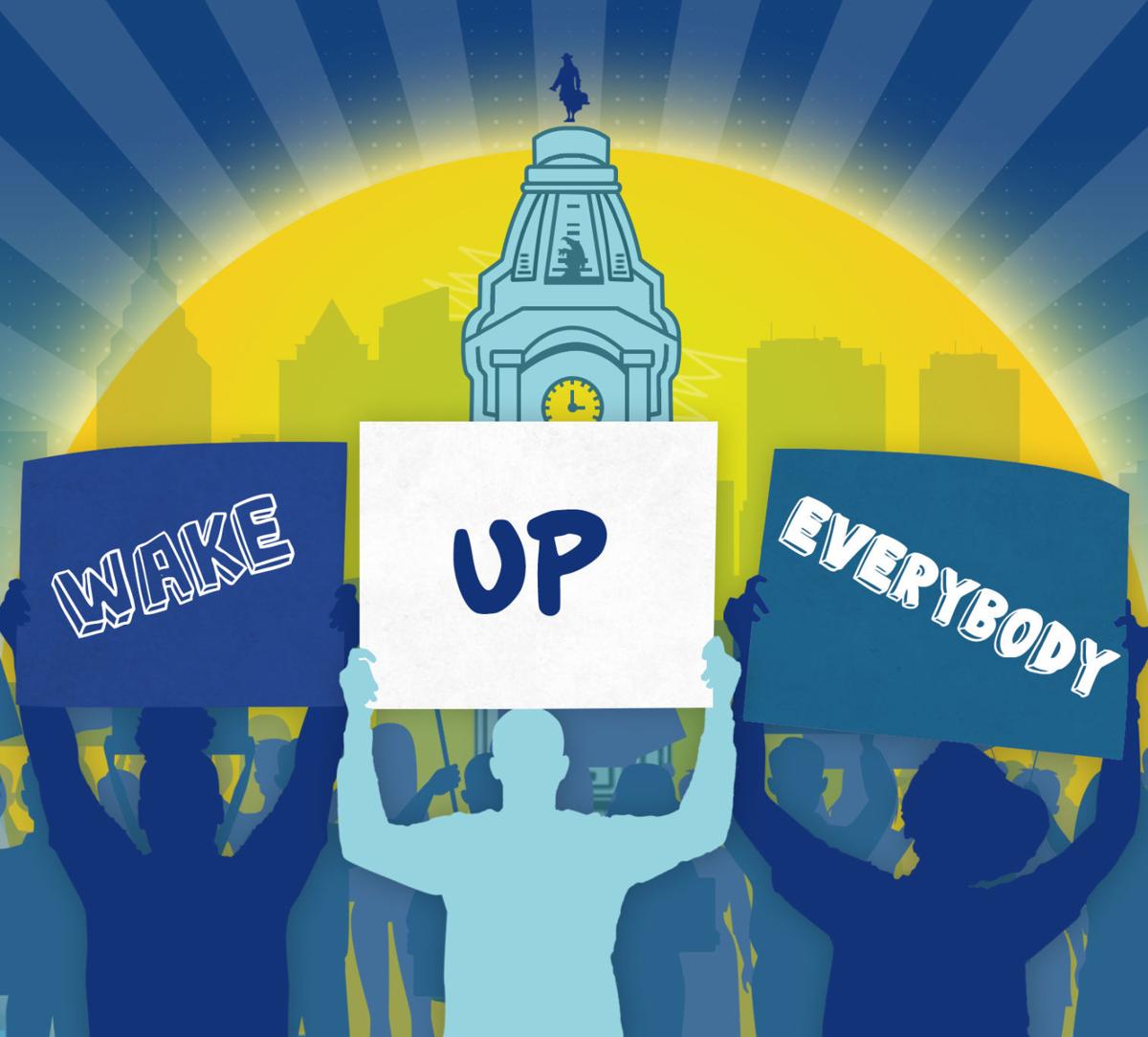 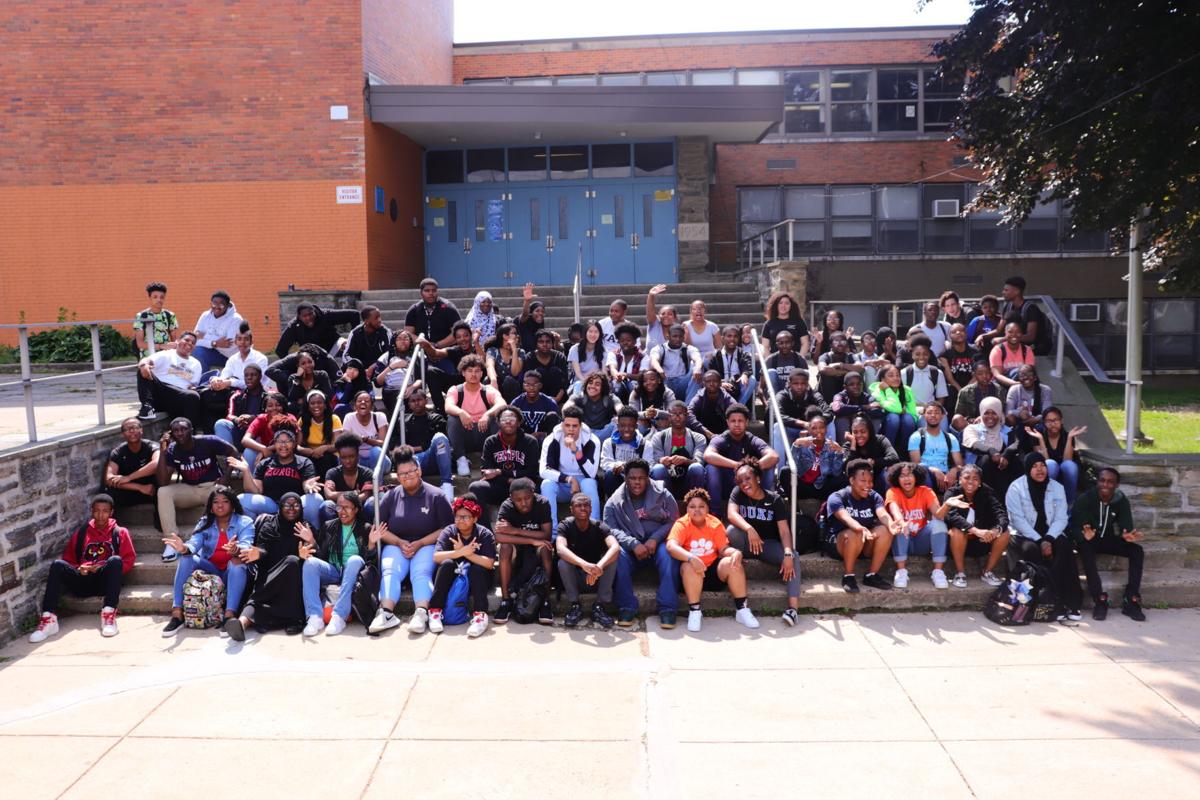 Hill-Freedman’s 10th-grade class worked on the project “Wake Up Everybody” all year school year in class. 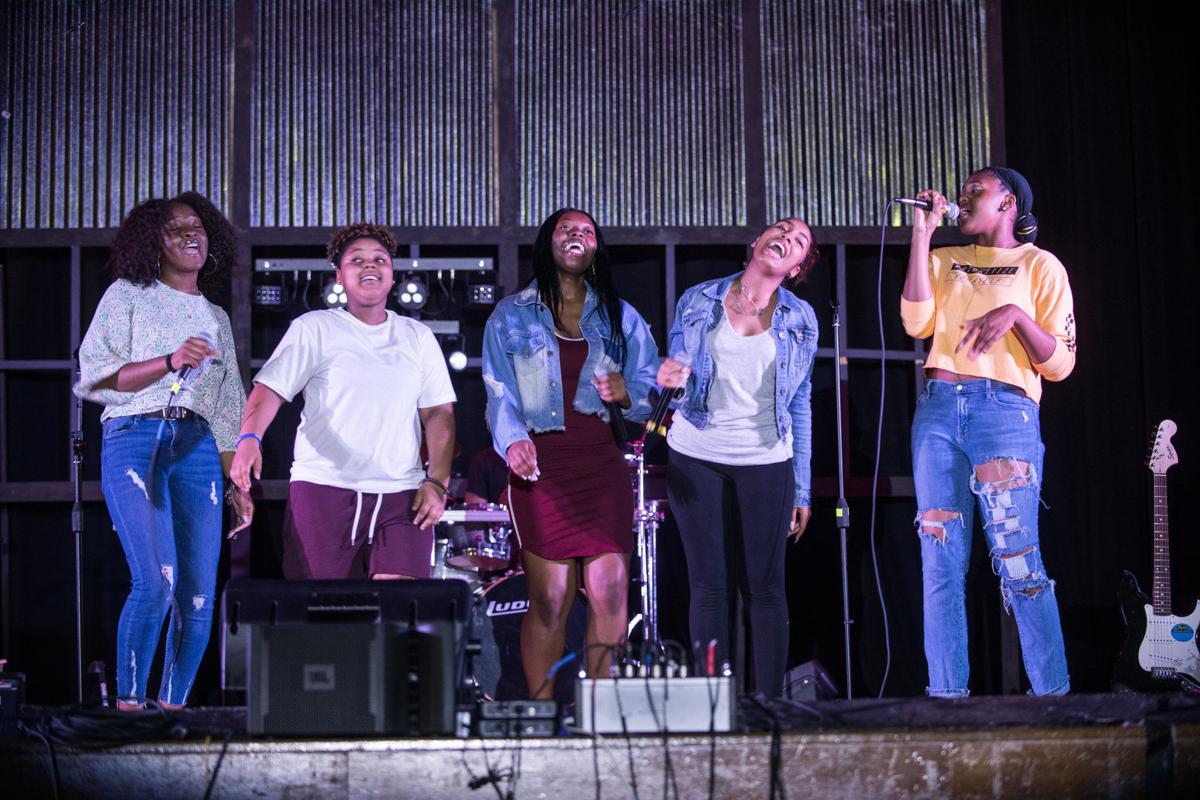 Hill-Freedman students performing at their album release event for their third original album “Wake Up Everybody.” — PHOTO: JACI DOWNS PHOTOGRAPHY. 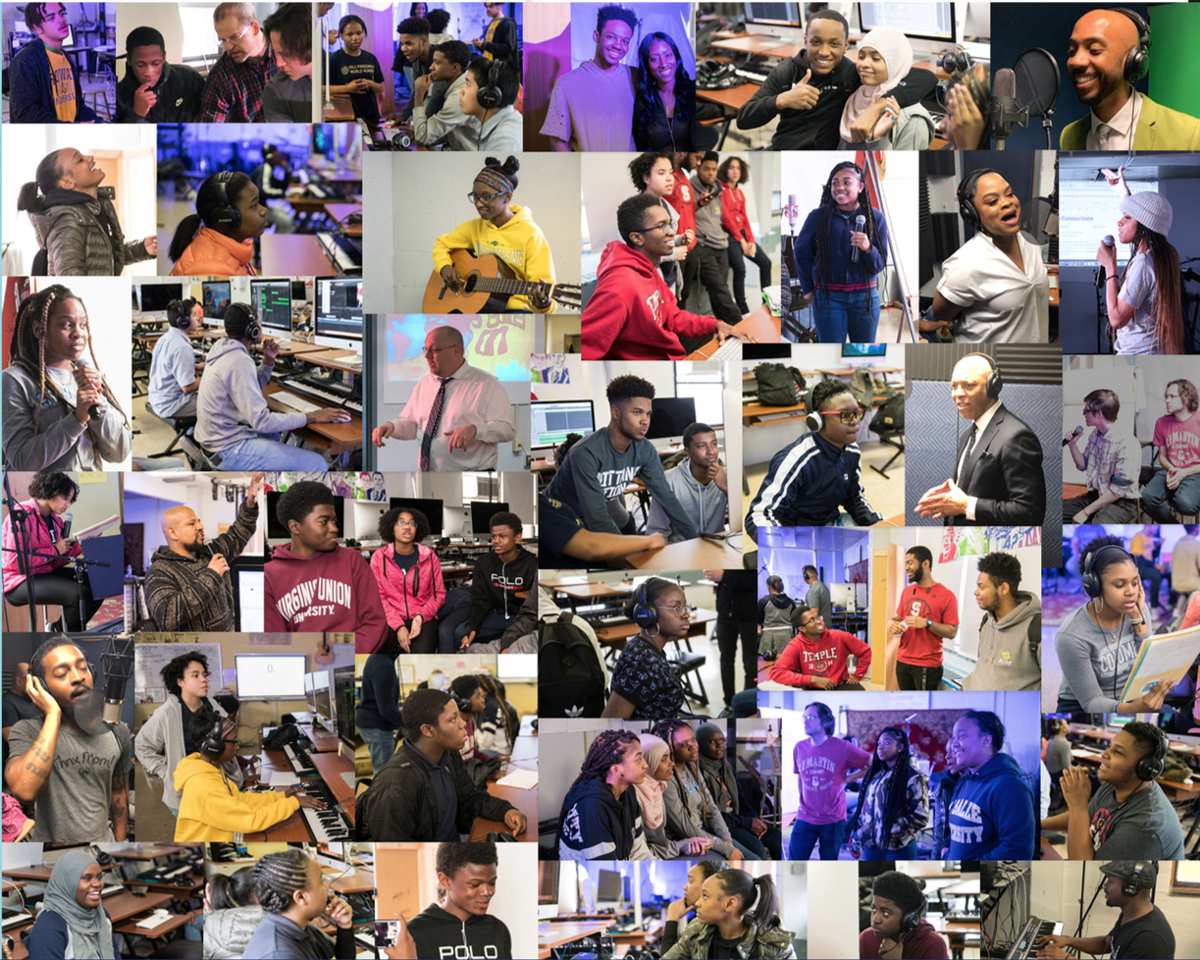 A collage of Hill-Freedman Waorld Academy students working on their third album “Wake up Everybody.” 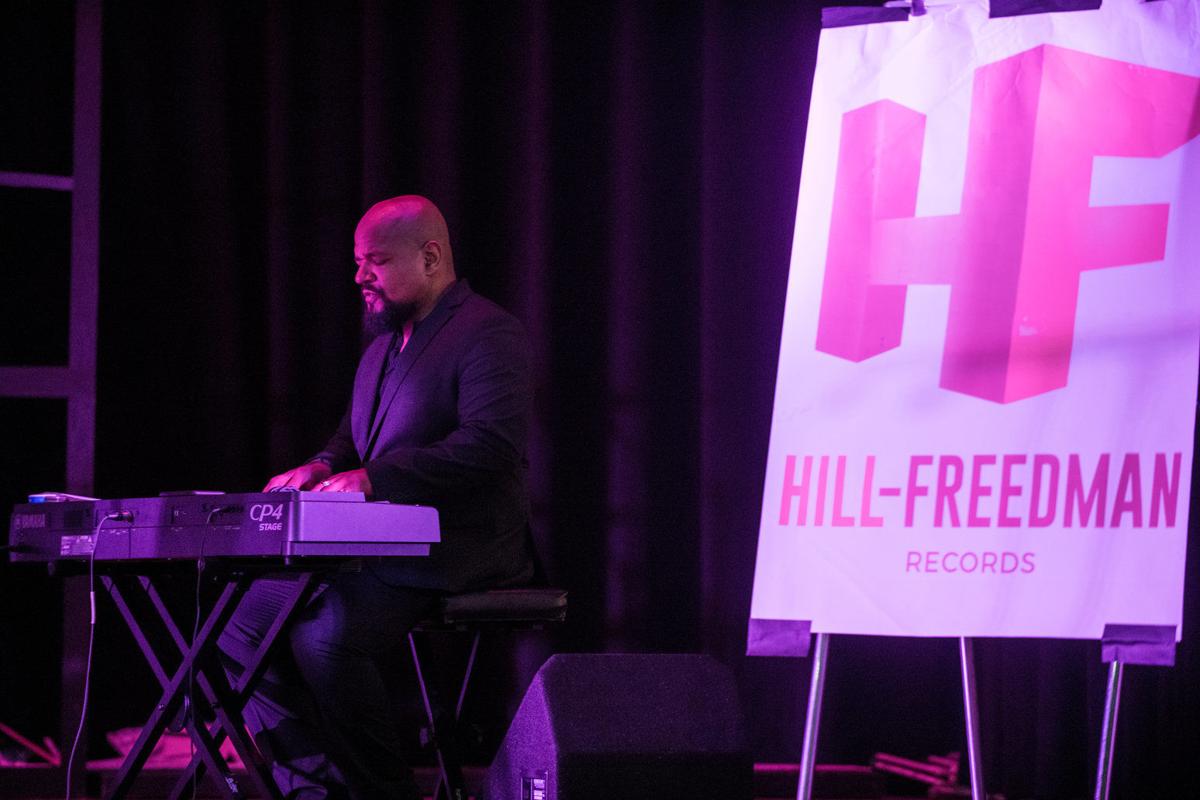 Hill-Freedman’s 10th-grade class worked on the project “Wake Up Everybody” all year school year in class.

Hill-Freedman students performing at their album release event for their third original album “Wake Up Everybody.” — PHOTO: JACI DOWNS PHOTOGRAPHY.

A collage of Hill-Freedman Waorld Academy students working on their third album “Wake up Everybody.”

It wasn’t until he started working on his school’s original album “Wake Up Everybody,” the third offering from the school’s Hill-Freedman record label, that he realized how influential the label was.

“Through this project, I was able to find out about the Sound of Philadelphia,” Joshua said. “I learned about their sound, the messages in their music, and how their songs brought people together. Their music gave people hope and that was something that inspired us when we started working on our own album.”

“Wake up Everybody” was created in partnership with Philadelphia non-profit LiveConnections, an organization dedicated to inspiring learning and building community through collaborative music-making.

The project was also supported by City Councilwoman Cherelle Parker along with the NBCUniversal Foundation, NBC10, Telemundo62, the School District of Philadelphia as well as additional foundations and individuals.

The school’s record label and the album are part of Hill-Freedman’s International Baccalaureate design/music technology program, which is led by music technology teacher Ezechial Thurman. Over 120 students participated in making the album, which is available on SoundCloud.

“Through this project, I was able to connect and work with so many different talented artists and musicians,” Joshua said. “They taught me how to be confident in what I’m singing and writing. They encouraged me when I wrote my song ‘So Crazy’ for the album.

“Everyone being there for us and being supportive of what we were doing meant everything to us,” he added. “We’re a group of students who have our own story to tell. We put our heart, sweat, tears, and soul into this album. This album is all about love, peace, and hope; we just want people to see this world through our eyes.”

Students drew inspiration for the 21-track album from the mission, songs, and style of Philly International while also drawing on contemporary R&B, pop, and hip-hop. The only cover on the album is the titled track “Wake Up Everybody,” originally recorded by Harold Melvin and The Blue Notes and covered by John Legend and The Roots in 2001.

The new version of the song features dozens of Hill-Freedman students, along with guest vocals by District superintendent William R. Hite Jr., rapper Chill Moody, Philadelphia musician and winner of the 2018 Sarah Vaughn International Jazz vocal competition Laurin Talese, and LiveConnections artists. Keyboardist and Hill-Freedman alumnus Eric Wortham II, who has toured with Adele and Jill Scott, is also on the track.

“The music and legacy of Philadelphia International Records are great models for our student artists,” Thurman said. “The students were really fueled by the message and power of The Sound Of Philadelphia.

“We did reach out to Mr. Gamble and Mr. Huff. The designee who did get back in touch was Mr. Chuck Gamble, who represents the Philly International catalog. He now works with Warner Chappell Music.

“They now own the whole catalog of Philly International,” Thurman said. He added that Warner Chappell agreed to waive the fees to allow them to record “Wake Up Everybody.”

“It was a neat moment for our students to be able to remake a song that inspired so many people when it made its debut 44 years ago. We’re appreciative to everyone for making this moment happen for our students.”

Under the artists guidance, student wrote lyrics, individually and in whole class collaborations. Many of the tracks features original student musical composition and production, while other tracks featured LiveConnections artists and guests.

“Toward the beginning of the project, we did a lot of listening,” O’Reilly said. “We talked about the song structure, because a lot of the students had a great ability to use words, but they didn’t know how to write a song yet. We showed them how to put their writing into song format. All of this helped in addition to performing helped the students take their writing to the next level.

“This project was all about amplifying the voices of students,” he added. “Music has a way of bringing people together. Hopefully after this, the music continues. I hope the students continue to work together and inspire others along the way.”

From the time he was a kid, Jahzeer Terrell always had an interest in the sciences and the performing arts. When the Philadelphia native wasn’…

The life and career of one of the nation’s greatest and private writers is being explored in a new documentary, “Toni Morrison: The Pieces I Am.”

Musicopia was recently awarded two grants for its Drumlines program — a $100,000 Core Mission Grant from Impact100 Philadelphia and a $45,000 …