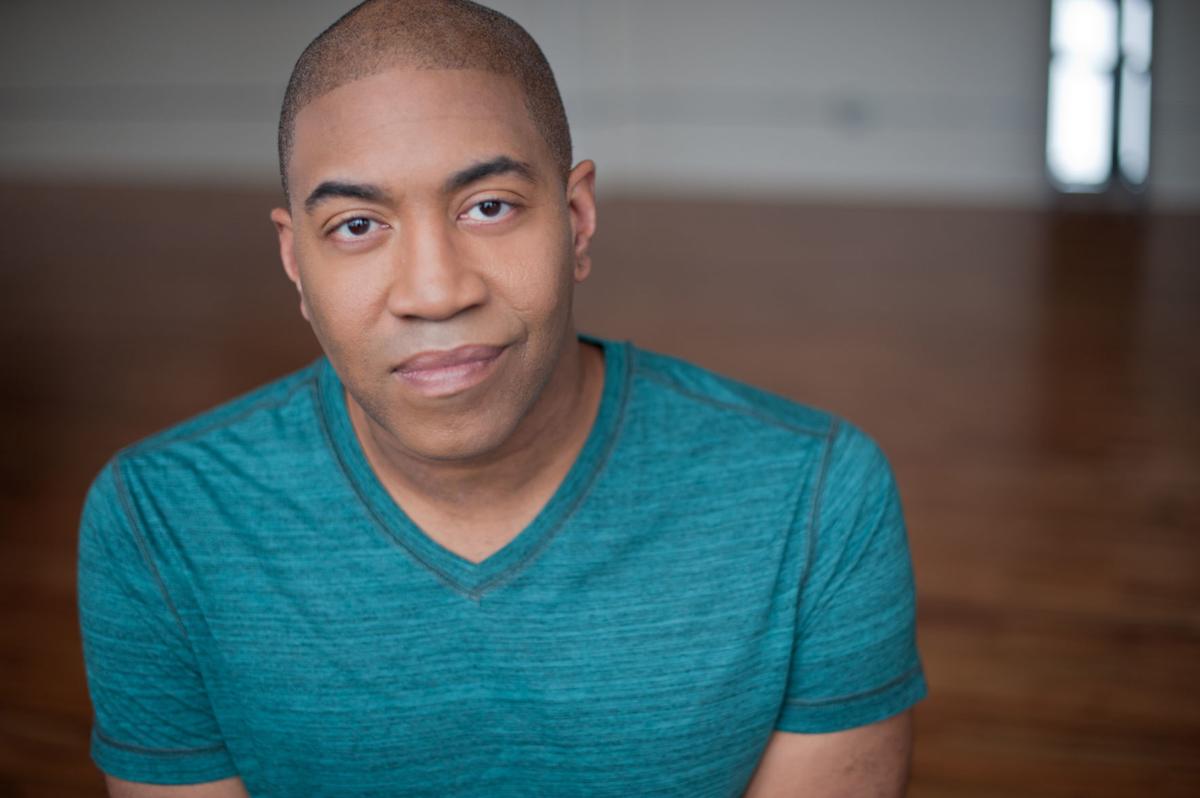 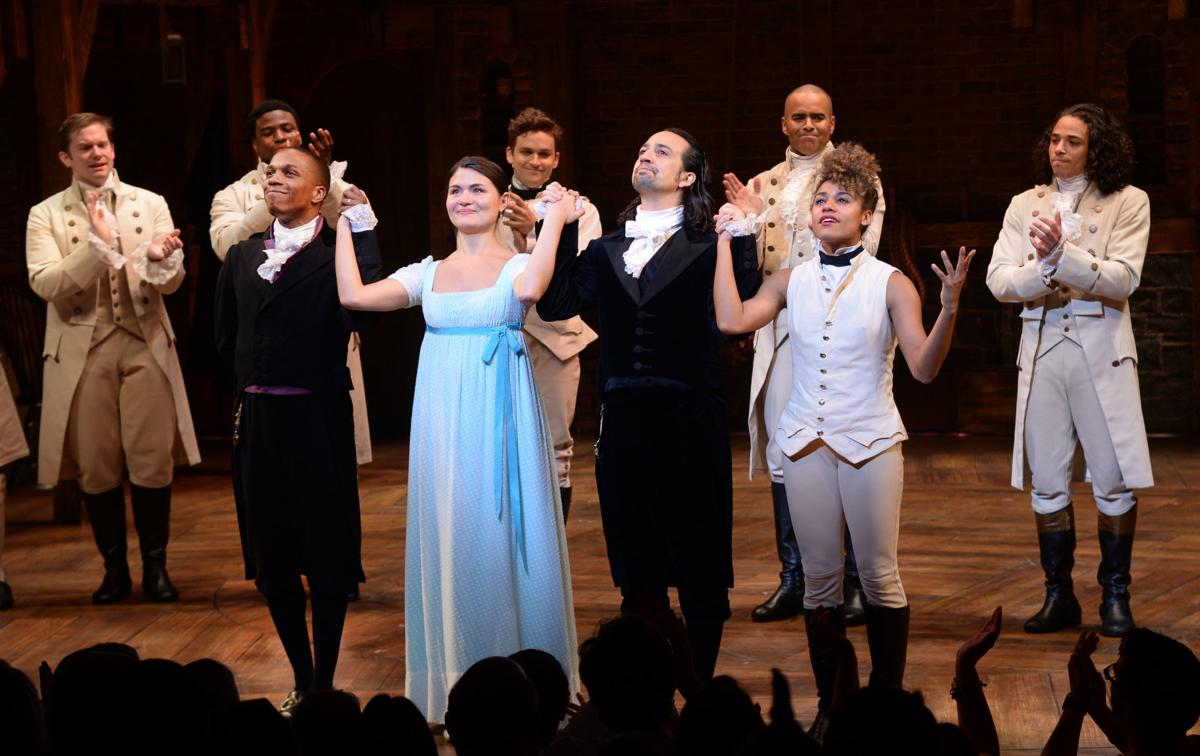 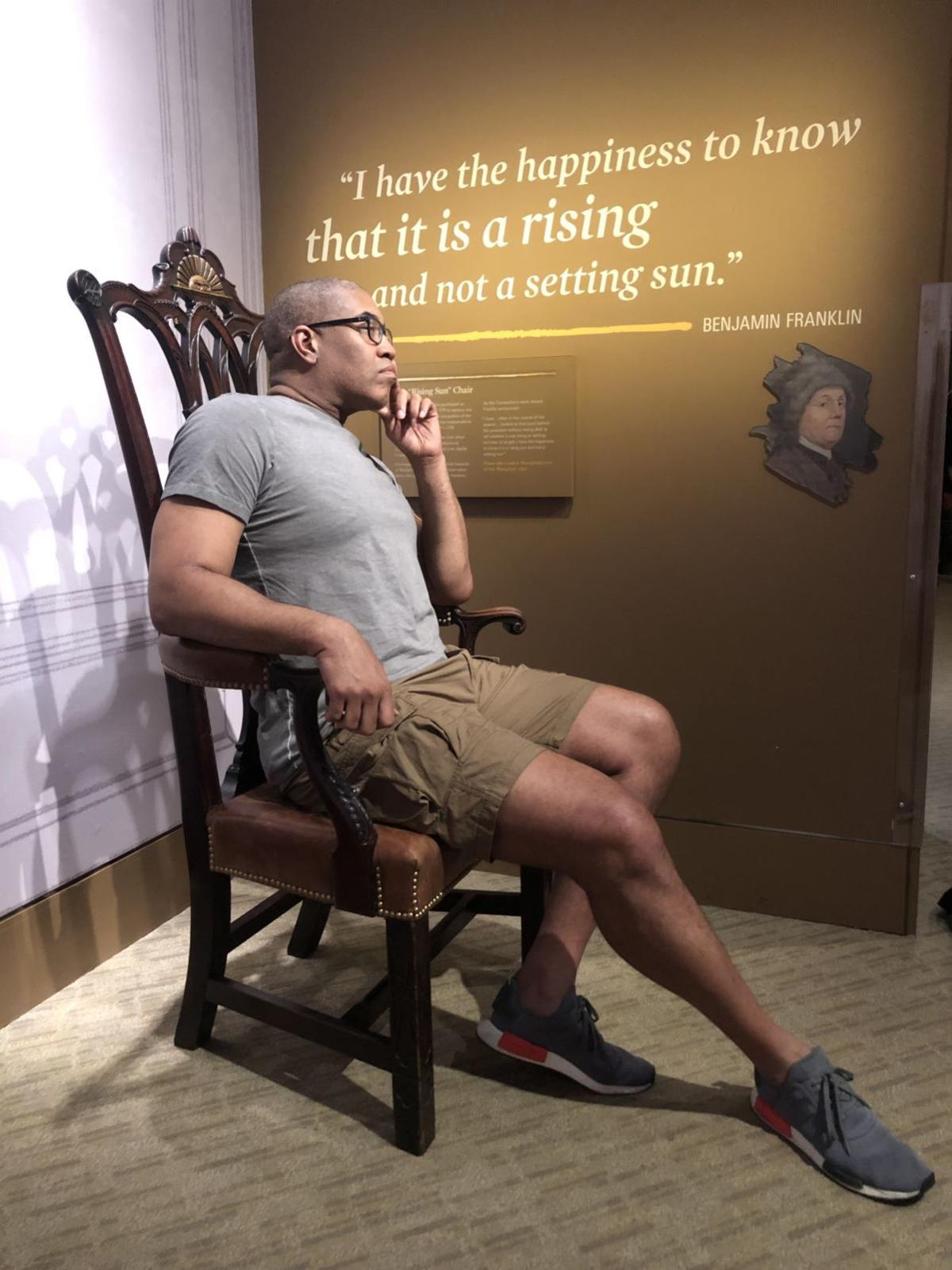 Actor Paul Oakley Stovall sitting in the Museum of the American Revolution’s replica “Rising Sun” chair – a reproduction of the chair that George Washington sat in during the Constitutional Convention.

—Museum of the American Revolution photo

Actor Paul Oakley Stovall sitting in the Museum of the American Revolution’s replica “Rising Sun” chair – a reproduction of the chair that George Washington sat in during the Constitutional Convention.

—Museum of the American Revolution photo

The Museum of the American Revolution wants to give everyone a taste of what it’s like to be in the room where it happens in a special conversation with national “Hamilton” tour member, Paul Oakley Stovall.

Stovall, who plays founding father George Washington, is part of a virtual conversation with the Museum of the American Revolution President and CEO R. Scott Stephenson as well as Alexander Hamilton expert, Joanne Freeman.

The actor and playwright says that being a Black man while playing George Washington presented him with a unique opportunity.

“It was revelatory playing someone who is a leader of so many people and has so much responsibility. We don’t often get to see that embodied by a Black man, in any American medium, whether it’s film, television, or theater. We have “Black Panther” fairly recently that was out, but to see a Black man that is running things is different,” Stovall says.

Recently historical figures such as Washington, Christopher Columbus and others have come under fire for owning slaves, racism and more as part of the American uprising following the killing of George Floyd.

“It’s important to take these statues down. At first it seemed to just be about Confederate statues, then it moved to Columbus, Washington and (Thomas) Jefferson,” he says. “I think these statues should go into a museum, but I’m a ‘for the people will of the people’ type person. So, if that’s where we’re going to go. Yeah, let’s go. Put the statues in museums, because there’s a lot of what George Washington did that was great.”

“The interesting thing for me with Washington is that there are statues of him everywhere. Removing him would be a much harder thing to pull off since he’s so ingrained in our identity,” he says. “He’s on our money. It’ll be much harder to extract him in that way. We’ll see how it turns out. I’m happy to be alive in this moment and witnessing this seismic shift worldwide.”

Much like the works of Washington and Hamilton, July Fourth is a celebration of freedom. With all that is going on in the world, Stovall often finds himself reflecting on what it means to be free.

“Freedom means the ability to move through this life without fear. When I say fear I don’t mean ‘Oh, I’m walking through the woods and I come across a snake’. Yeah, you’re scared for a second but that’s not fear, that’s you reacting to a situation in the moment. I mean to move through life where your inhales and your exhales go freely and voluntarily, and you don’t have to think about breathing because you’re just doing it. That’s what it means to me to not be afraid,” he says.

The actor says his biggest takeaway from playing Washington night after night is that he is just like anyone else.

“You know what I think about him now, the more I do it, the longer I do it? He was just a man,” Stovall says.

The “Hamilton” star points out that seeing Washington as a regular person can inspire people to see the greatness in themselves.

“One of the young Black men who’s out there protesting can become the face of our nation. The next George Washington is out there. The next great leader of the revolution is out there,” Stovall says.

To see Stovall’s virtual conversation, “History Has Its Eyes on Us,” head to the Museum of the American Revolution’s website.

Made in America Festival says see you next year

The organizers of the Made in America Music Festival have canceled this year's event.

Philly teachers at odds on how to reopen schools

Shanika Wright and the former Shateama Hagans were married on Sunday, May 25, 2019, at Falls Manor Catering and Special Events in Bristol, Pen…

The Philadelphia Theatre Company is hiring a resident artist to help deepen the diversity of its future programming.The new position comes a y…

The opening scenes of the filmed version of the Broadway musical “Hamilton,” which started streaming on Disney+ this Independence Day weekend,…