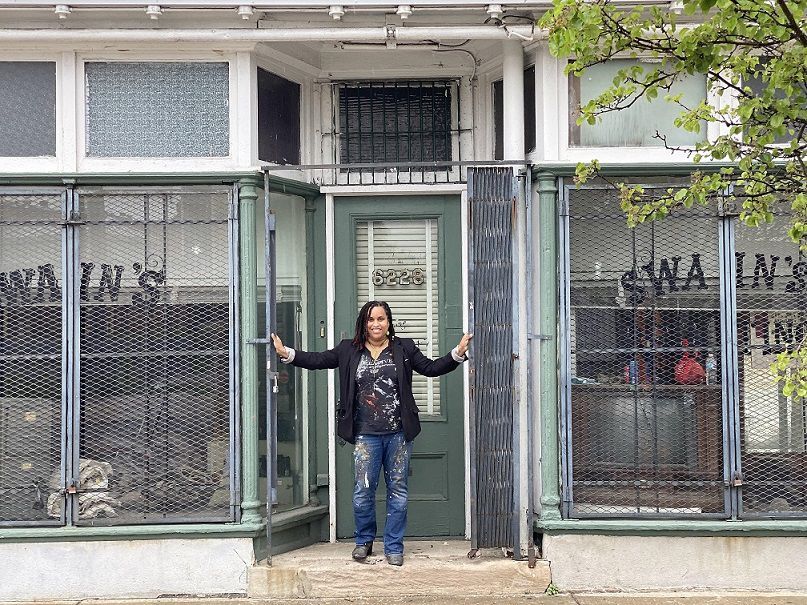 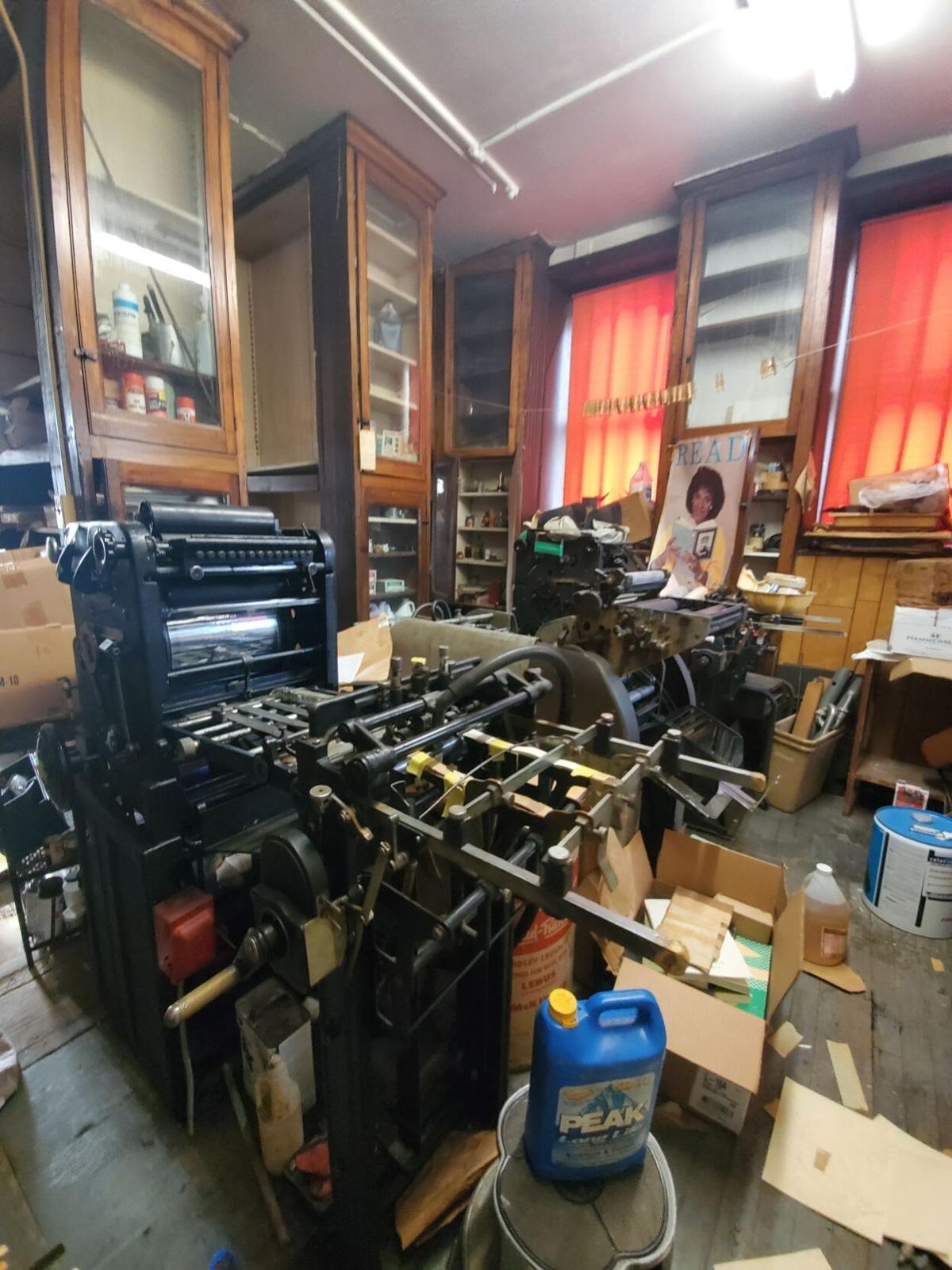 An old printing press found in the Swain Building. 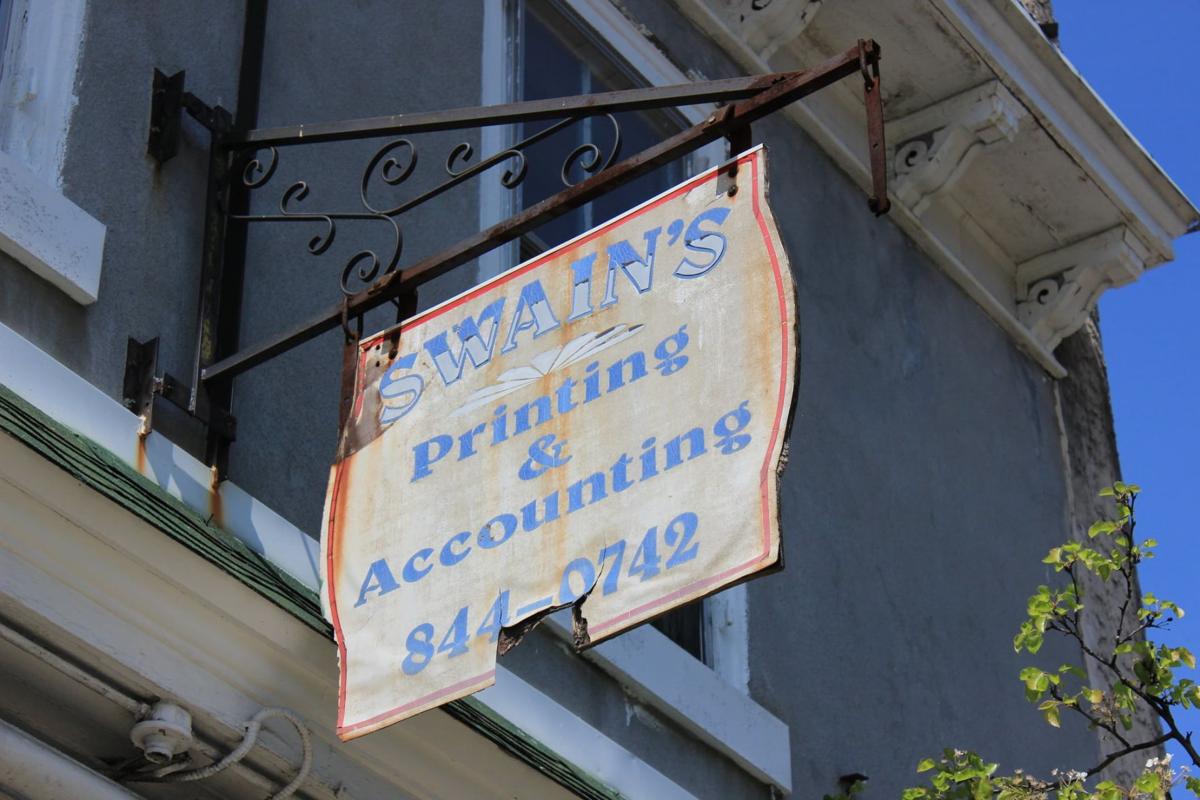 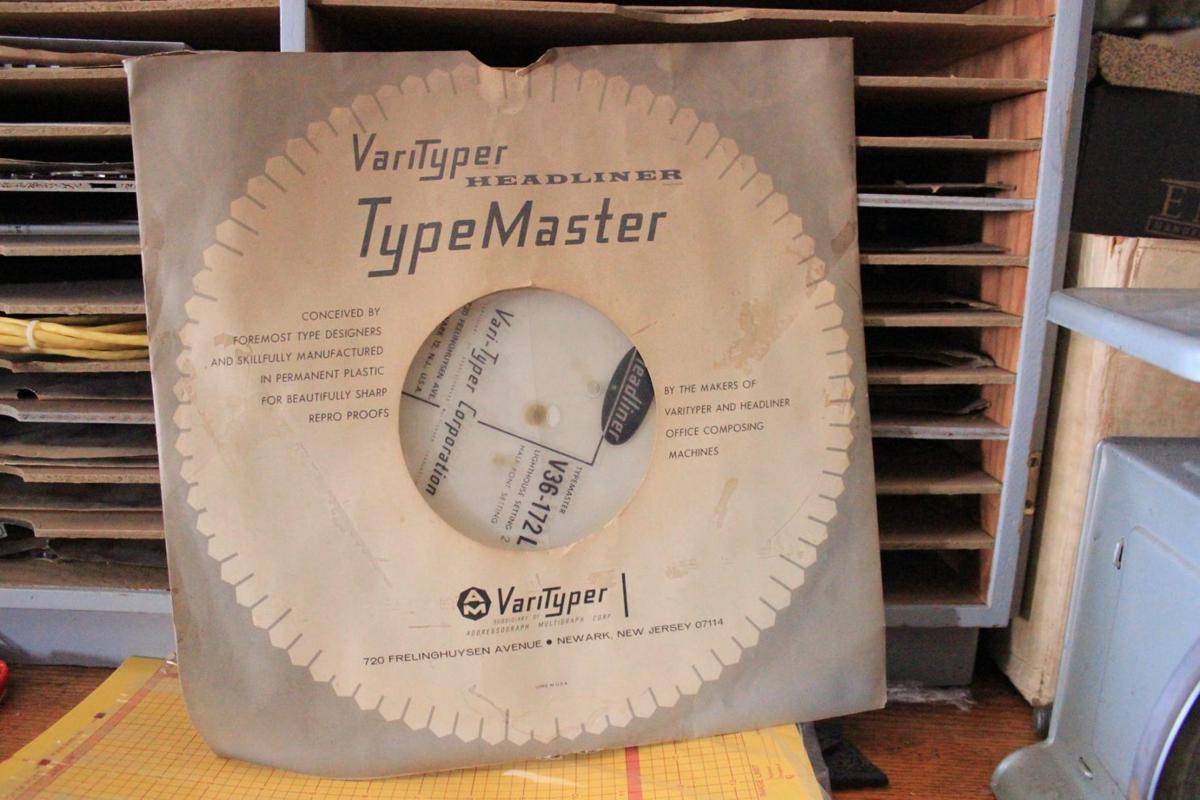 An old printing press found in the Swain Building.

West Philadelphia native Keisha Whatley hopes to stimulate the arts on Germantown Avenue as she undergoes plans to renovate the historic Swain building into the Germantown ArtHaus.

“My vision is for the ArtHaus to be a creative hub and beacon of light in the community. By early fall, the building will become a place where artists and creatives are provided a platform to produce, share and sell their work and where the community can also come to create art, make new connections and relax while enjoying great coffee, smoothies and baked goods from local artisans,” said Whatley.

Whatley’s Germantown ArtHaus is planned to be an artist-focused coworking space and cafe.

“We are in the process right now of restoring and renovating the spaces,” said Whatley.

“It will be a place of connection for the community, and a place of opportunity. I’m excited to create opportunities in the neighborhood. We’re excited to offer internships to high schoolers in the neighborhood who are interested in entrepreneurship and the arts. I mean there’s just so much that this just this one place is looking to bring to that community,” she said.

Owning a community art studio has been a dream of Whatley’s for a while now so when she had the opportunity to purchase the three-story Victorian, which formerly housed minority-owned businesses, she jumped at it.

“I’ve had this idea for some time. In 2009, I pulled out my sketchbook and I decided I wanted to create the Artist Bank, which would be a nonprofit that helps artists make more money and learn professional tools. Artists are often known for being flaky, unreliable, unprofessional and I have been an artist all my life and have been blessed with the use of both the right side and left side of my brain, so being professional is important to me,” Whatley said.

“I wanted to really dispel the myth that we’re unprofessional and that we can’t be depended on and things like that so the Artist Bank idea was kind of written all down in 2009. In 2019 I actually started that nonprofit 10 years later and co-hosting some community art shows, and in the meantime I was writing a business plan, a three story proposal with a cafe on the first floor, which would act as a conduit for artists to share and sell their work. Kind of think, Starbucks inside of a Barnes and Noble. Starbucks is there, you come in, grab your coffee and Barnes and Noble is hoping you buy some books. ArtHaus has that set up, but for art and artists,” said Whatley.

There will also be a wall to showcase and highlight T-shirts from local artists and another wall dedicated for the upcoming Germantown selfie project.

“So you’ll come in, you’ll grab yourself a smoothie, maybe a salad, you’ll sit down and it’ll be jewelry that someone in Philadelphia, an artisan has created and you may want to purchase that for your mother.”

“And overall it’ll be a place where the community can come together to be in a creative space, where there’s something different. You move differently, you relax differently where there’s an artist painting in the window and there’s music and creativity, whether you’re an artist or not,” said Whatley.

The main idea is that, “the first floor would be a cafe that’s appealing to the community. The second floor would offer studios and artists co-working space with the third floor being an apartment and hopefully we rent it to an artist,” she said.

In addition to those plans, Whatley also wants to offer leasing opportunities to non-profit organizations. “And literally, it will turn a building into an art house.”

The former Swain building and soon to be Germantown ArtHaus was built at the turn of the twentieth century and originally a pharmacy in the early 1900s. It was most recently a combination of accounting services and print shop owned by the Swain family, who were well-respected business and community leaders.

“The fact that it was black-owned for decades and a fixture in the neighborhood intrigued me greatly,” said Whatley. Although she wasn’t looking for an historic building, Whatley shared that when she did find out about the history of the building, she was thrilled.

“I guess you could say it was happenstance. The Swain family purchased it in 1979, which was the year I was born. The exterior was already trimmed in green, which is my favorite color. And their daughter was using the second floor as an art studio already. The saying, ‘Coincidence is when God chooses to remain anonymous,’ was echoing in my head the whole time I was gathering all of these facts, and I knew early in the process that I was destined to purchase this building.”

“As an African American indigenous female, being able to purchase a building that an African American couple owns, I mean literally I was born in1979. For 32 years they had this amazing beautiful building that they owned, they weren’t just renting it. To be able to purchase the building, and then not have plans to demolish it and turn it into some new kind of building style, but our goal is to really restore it and bring back the beauty of this Victorian historical building is an honor for me. And one way that we’re actually honoring the Swain family is that part is going to be the Swain studio. Just to give honor to that family and what they created the legacy they created in the building,” said Whatley.

Legacy is another one of Whatley’s main focuses.

“Each of the studios on the second floor is named after someone that inspires me, from my own family and in the art world as well,” Whatley said.

Whatley will be curating art initiatives and programs starting with an artist summit on Tuesday, May 18 but the art house will not officially open to the public until later this Fall.

The artist summit will involve recruiting about a dozen artists to paint a mural on the west facing wall of the building, which Whatley says has been begging for a voice for decades.

The mural’s theme, Transforming Tragedy: A Gateway to Hope, will focus on victims of police brutality.

“Being a mother of two African American teenagers (one is male) made the creation of the mural theme a no-brainer. However, it was important to me that each story is told through a lens of hope; honoring the lives lost, memorializing the outrage those losses produced, and directing that honor and rage to a positive future. We see enough triggering imagery of death and violence in the world today. I didn’t want to wrap the building in grief. That is the antithesis of the energy that I envision for the space and for the community. It is imperative that the mural, while reflecting the underbelly of racism, offers the promise of hope, transformation and change,” said Whatley.

Despite the momentum that Whatley is creating, she says she is still faced with a few challenges.

“The biggest challenge is fundraising. We secured funding for, I would say, 60 to 70%, of the renovations. We need the community’s help for the other $150,000 so that we can really address the structural issues of the building. The building has three roofs, the stucco, is literally falling off the building on the side where the big mural will be. And so we’re working on getting the word out about how the community can really be a part of this building. Our goal is that when people walk in they feel like they literally were a part of making this happen,” said Whatley.

Creating the idea for a modern and artistic community hub and securing the space may have been the relatively easier part of the Germantown ArtHaus plan.

“Getting people to take ownership of the space through supporting the project that’s been our biggest challenge is really. Finding these structural issues and identifying how do we communicate best to the community that they can literally put their hands and be a part of this building,” said Whatley.

For more information on Tuesday night’s event or to support the Germantown ArtHaus, visit gtownarthaus.com