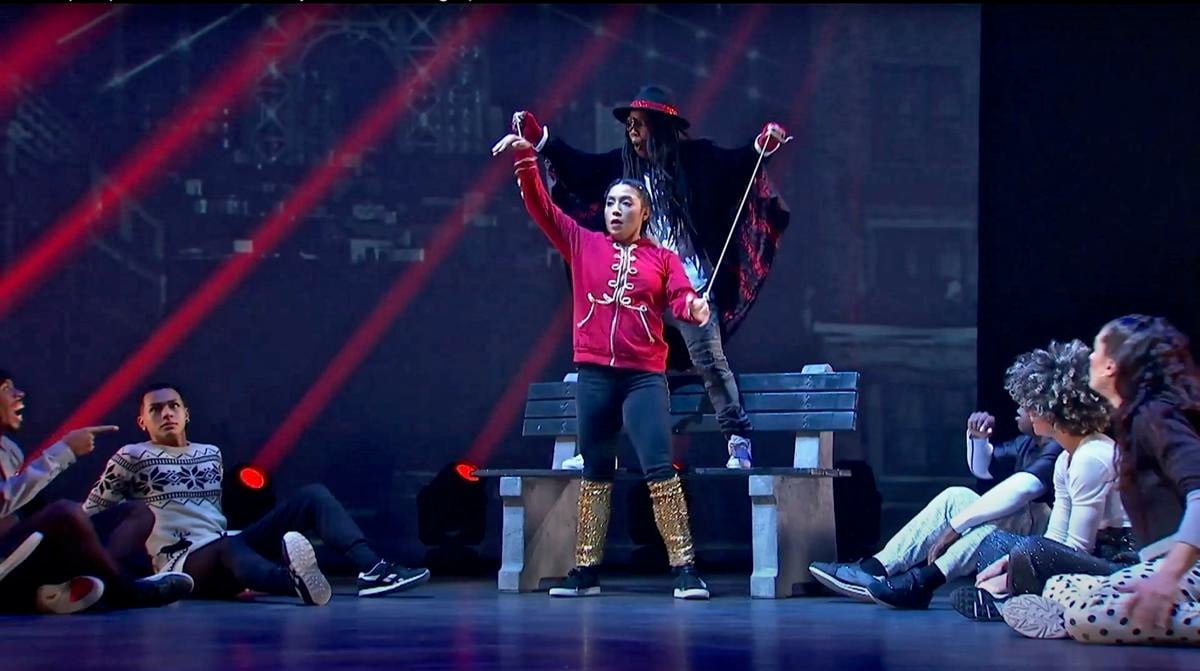 “Hip Hop Nutcracker,” a production of New Jersey Center for the Performing Arts, will be streamed by the Kimmel Center. —Kimmel Center photo 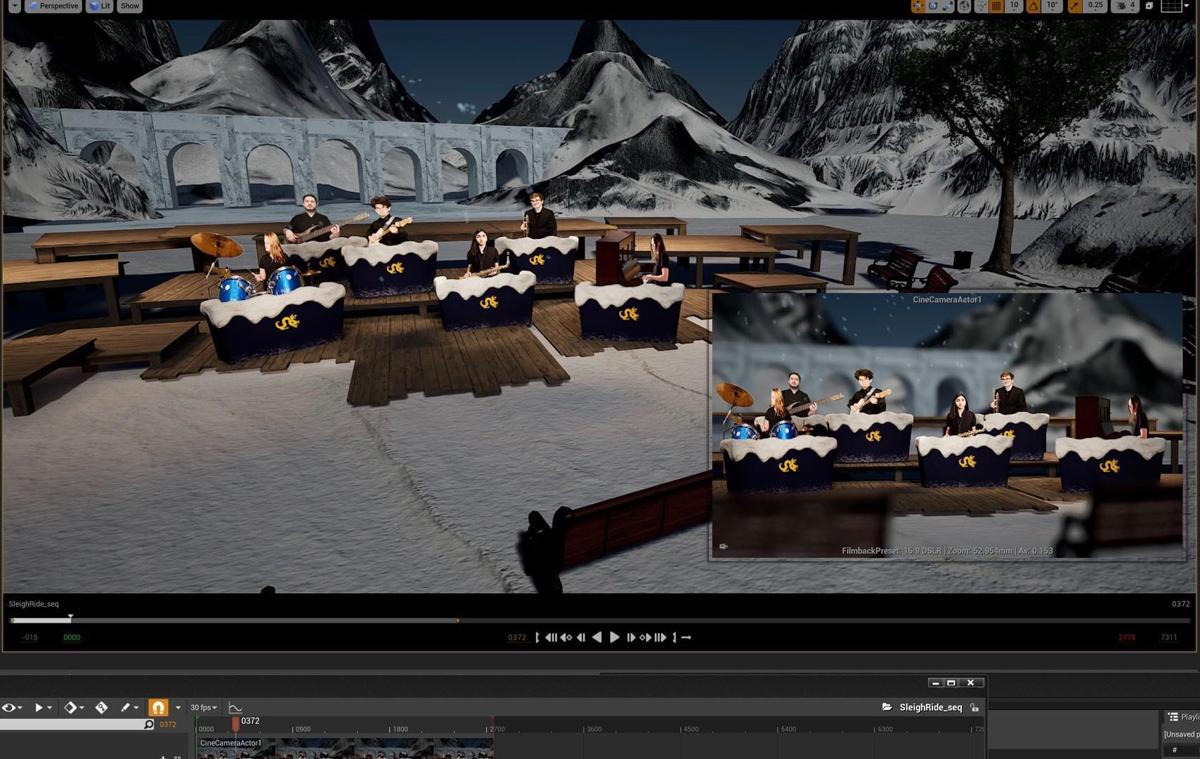 Drexel University jazz orchestra will put on a virtual concert of Duke Ellington’s Nutcracker Suite. Students at Drexel’s VR lab are creating an immersive digital environment. The musicians each recorded themselves at home with green screens, then those individual performances are assembled together into a 3D digital environment, made to look like a snowy mountainside. —Drexel University photo

“Hip Hop Nutcracker,” a production of New Jersey Center for the Performing Arts, will be streamed by the Kimmel Center. —Kimmel Center photo

Drexel University jazz orchestra will put on a virtual concert of Duke Ellington’s Nutcracker Suite. Students at Drexel’s VR lab are creating an immersive digital environment. The musicians each recorded themselves at home with green screens, then those individual performances are assembled together into a 3D digital environment, made to look like a snowy mountainside. —Drexel University photo

This holiday season may not look or sound like ones before the coronavirus pandemic. Choral singing is considered an infection-superspreading activity, and the chestnut holiday ballet “The Nutcracker” cannot be seen in theaters this year.

The Kimmel Center for the Performing Arts in Philadelphia is trying to fill those gaps with online programs. The annual Soulful Christmas choral concert, which normally features hundreds of choir singers from area churches, will be an online event this year with music director Dr. J. Donald Dumpson and WDAS radio DJ Patty Jackson. On December 20, they will be playing recordings of previous “Soulful Christmas” performances, as both a live broadcast on WDAS at noon that day and an on-demand stream via the Kimmel Center’s website.

The Kimmel Center will also be streaming a recording of “Hip Hop Nutcracker,” as performed last year at the New Jersey Performing Arts Center in Newark. The annual touring show uses the well-known E.T.A. Hoffman story and Tchaikovsky score, but replaces ballet dance with hip hop.

“There’s Clara and Drosselmeyer, they’re all there, but it’s set in New York City,” said Frances Egler, the Kimmel’s senior director of programming. “It’s a fun, diverse cast of dancers telling the story of Clara and the Nutcracker prince and fighting mice and the land of sweets, using the Tchaikovsky and the hip-hop vocabulary of dancing.”

No live events will be performed at the Kimmel Center this year, due to the pandemic. Egler said 80% of staff have been furloughed. “Hip Hop Nutcracker,” which has never before been performed in Philadelphia, is a ticketed online presentation produced by the New Jersey Performing Arts Center as a benefit for performing arts centers in cities around the country, including the Kimmel.

The classic “Nutcracker” ballet — with standard-bearing choreography by George Balanchine — will once again be presented by the Pennsylvania Ballet, but it will not be live. Nor will it be new. Pennsylvania Ballet is streaming a recording of last year’s opening night performance.

Executive director Shelley Power said all Pennsylvania Ballet’s performances are recorded, but for archival purposes so the director, crew and dancers can see how the show might be improved. Their “Nutcracker” was not recorded with the intention of showing it publicly.

“I think our audiences are pretty generous right now, understanding we are making a shift,” said Power. “We are bringing dance to a wide variety of people, and to make it accessible, we are on a learning curve. Let’s be honest. We did not prepare our budgets to have multi-camera recordings.”

Many performing arts organizations, including Pennsylvania Ballet, had been considering beefing up their online content for many years as a way to broaden their audience. The pandemic has accelerated those efforts. Power says this spring, the Ballet will be working to choreograph dances specifically for the camera, with dancers rehearsing in small, isolated groups.

“In the future, we will be recording much differently,” she said. “Now we know we have to have the highest-quality performance videos to show online.”

The Philadelphia Orchestra will stream selections of Tchaikovsky’s “Nutcracker” score from Dec. 17 to Dec. 20. The newly recorded performances are produced in partnership with WHYY.

Across the river in West Philadelphia, the Drexel University jazz orchestra will get into the holiday spirit, for the first time.

“We don’t normally do a holiday show. I avoid all holiday music if at all possible,” said Brent White, the orchestra director. “But this year felt like the year.”

White decided this was the year that the student jazz musicians would take on Duke Ellington’s “Nutcracker Suite.” Because the orchestra is not able to congregate on campus — all learning is happening remotely — White had an idea to have each player record themselves at home, then mix them together with visual animation.

He asked Nick Jushchyshyn, the director of Drexel’s virtual reality lab, to do the animation. Jushchyshyn went a step further.

“Brent originally came to us with an idea for an animation. It was sweet and wonderful,” he said. “But I thought, if he has enthusiasm for creating a virtual event, we have an opportunity to showcase all the skills of many different students.”

The holiday concert will be an immersive 3D digital environment, not unlike a video game, created by students in Drexel’s Animation Capture and Effects Lab. They sent green-screen backdrops to each jazz musician at home, and instructed them how to record video of themselves performing their part of Ellington’s Nutcracker arrangement.

The VR students designed the computer-generated environment themselves: a large wood-plank, open-air stage built on the side of a snowy mountain. The players were then placed into position on the stage, performing together as an ensemble of green-screened videos.

“If it hadn’t been for the challenges we’re facing right now, we would have had a traditional concert on a stage, everyone would have enjoyed it,” said Jushchyshyn. “But this is a testament to the students’ trust in wild ideas.”

The concert was pre-recorded, mixed and edited into an immersive experience crafted for a single online showing.

The only version of the “Nutcracker” to be performed live this year in Philadelphia will be the “One-Man Nutcracker” by Chris Davis. His scrappy solo performance, which premiered last year, requires only himself and one other person to do the lights and sound. Davis will perform and livestream it four times.

The concept of “One Man Nutcracker” is a personal journey of the performer, Davis, who wants to learn to dance ballet despite having no training or experience in any kind of dance. He assumes the challenge of performing the entire “Nutcracker” — liberally truncated — by himself in about an hour.

The performance is both absurdist and confessional in tone. Because it can be performed in isolation, it seems almost tailor-made for Christmas 2020.

“This is a good year for it: an unconventional interpretation of the holiday classic,” said Davis. “This holiday season will be nothing if not unconventional.”

Most of the theater pieces Davis creates, including “One-Man Apocalypse Now” and “Drunk Lion,” are solo shows. When the pandemic forced live theater to shut down in March, he began to revive his oeuvre as livestreams. He performed his last show in May, a few days after the killing of George Floyd by Minneapolis police officers. When Philadelphia erupted into a summer of social unrest, Davis didn’t see the point of theater.

He spent his time joining street protests, at least 10 of them by his recollection.

“One-Man Nutcracker” is Davis’ return to theater after a seven-month hiatus.

“I feel like the Nutcracker now feels right,” he said. “It’s December, the holidays, and I know so many people are pining for something that gives a sense of tradition and normalcy. I think the show has become more important than previously, because of the absence of so many things.”