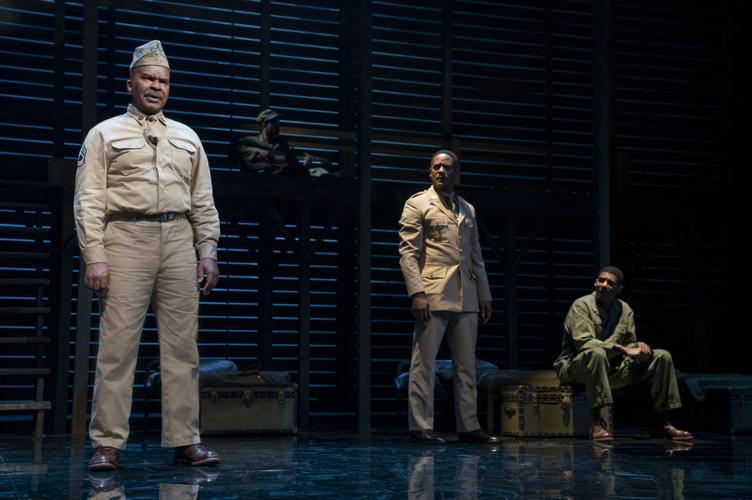 David Alan Grier, from left, Blair Underwood, and Billy Eugene Jones during a performance of “A Soldier’s Play” in New York. 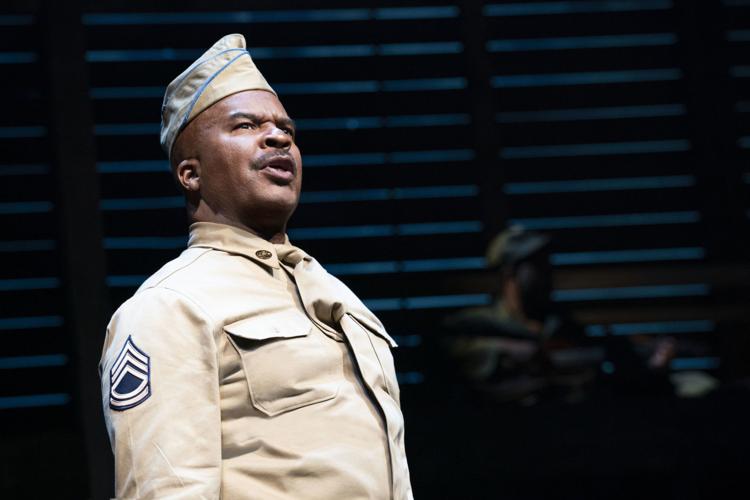 David Alan Grier, from left, Blair Underwood, and Billy Eugene Jones during a performance of “A Soldier’s Play” in New York.

NEW YORK — When David Alan Grier was offered a chance to revisit one of his favorite plays on Broadway, he quickly agreed. He just forgot about all the beatings.

In “A Soldier’s Play,” Grier plays a stern Army sergeant who during each show is pummeled twice and later shot dead, again twice. While the violence is fake, the actor does have to repeatedly drop and roll around on the American Airlines Theatre stage.

While this is Grier’s third time performing “A Soldier’s Play,” the fact that the role he’s playing was so physical slipped his mind. He only remembered the physicality when a fight coordinator appeared.

“I forgot about all that. I was like, ‘Oh, he has lots of lines. Yeah, I’ll do it.’ I thought there were little scuffles,” says Grier. “I thought, ‘Well, he gets pushed a couple times. A lot of monologues. I’ll take it.’”

To be sure, Grier is the last person you’d expect to be caught unaware. One of his earliest roles was in a small part in the off-Broadway debut of “A Soldier’s Play” when he was in his 20s. He revisited the work when it was turned into a 1984 movie. This is his third bite of the apple. “I was the youngest actor. Now I’m the oldest,” he says.

The play by Charles Fuller is set on an Army base in Louisiana during World War II. A Black investigator has been called to find out who murdered the Black sergeant of an all-Black company. What he finds is racism — but not from white bigots or the KKK. He finds intolerance within the Black ranks.

The play won the Pulitzer Prize for drama and over the years has attracted some of the most accomplished actors in the Black community: Denzel Washington, Adolph Caesar, Samuel L. Jackson, Wood Harris, Taye Diggs, Anthony Mackie, James McDaniel and Blair Underwood.

Jerry O’Connell, who plays a captain worrying about the direction of the case, said it’s a kick having Grier — who has now played three different roles — around for the Broadway version. “It is pretty funny asking Mr. Grier for advice, like ‘Hey, what happened in the original production?’ He’s like, ‘It was 38 years ago! I don’t remember any of it!’”

Grier recalls making the film in Arkansas and one day then-Gov. Bill Clinton stopped by the set. He also vividly recalled the food: Patti LaBelle, who played a nightclub singer, made rice and red beans daily and one day the caterer served something a little odd: catfish sushi.

“I abstained. Wisely, wisely, I was told later,” Grier says. One reason was that he’d never heard of such a dish. “And I’m going to go out on a limb. I speak for all Japan: Neither have they.”

When you speak to Grier, food often comes up. He’s an avid chef and shares his creations on social media and in a food blog. He recently detailed cooking a massive pork shoulder for 8 hours.

He managed to pull out the bone and simmer it with root vegetables to make bone broth. Someone mentioned in the comment section they’d also been boiling bones but they were doing it for three days and the broth tasted terrible. “Yeah, you dummy. Three days? That’s what you do to get rid of a body,” joked Grier.

Food — well, dessert, really — had an important role in how he became an actor. Growing up in Detroit, he knew he was funny but he moved to New York in the mid-1970s to be a musician. And like all struggling musicians, he had a side hustle.

Grier worked at a Häagen-Dazs ice cream store in the Upper East Side of Manhattan and often after his sticky shift would go across the street to a disco. One night he was messing around when an actor spotted him and said he had talent and was wasting his life.

“He was really responsible for saying you are on the wrong path. Whatever he saw in that moment was ‘You need to go over here,’” says Grier. “And I listened.”

Grier, who after that conversation applied to acting schools and chose Yale, would go on to a career on the stage (“Dreamgirls” and “Porgy and Bess”), on TV (“In Living Color” and “DAG”) and film (“Jumanji” and “Native Son”).

Being on Broadway again these days isn’t old hat to the 63-year-old performer. He even likes to get to the theater early, long before the place is buzzing.

“To walk into a theater and belong — this is my doorway into my life — is the best. It’s the best part of the day,” he says. “You walk in this environment before the audience is there and the crew is kind of just vacuuming, setting up, testing everything. I love it.”