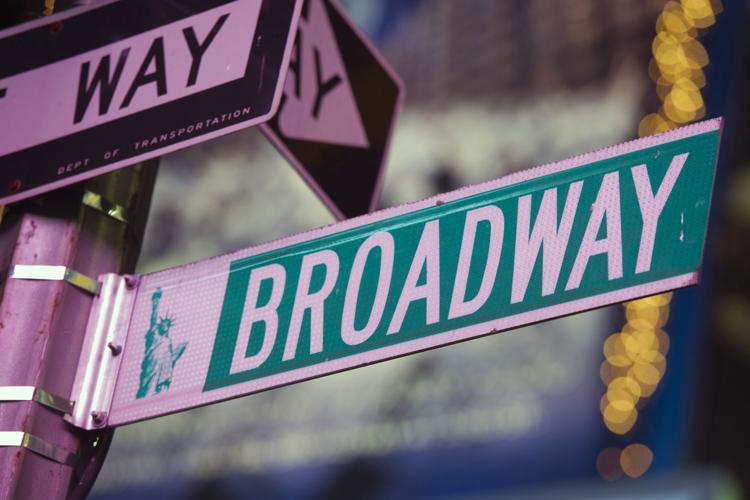 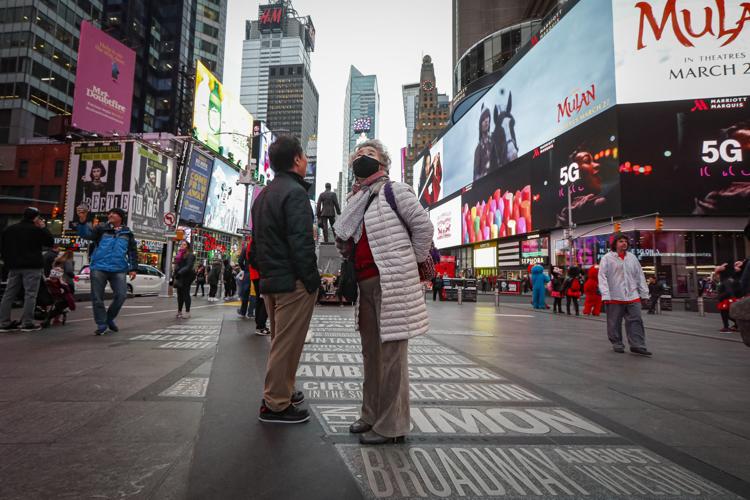 A pedestrian wearing a face mask stops in Times Square, Thursday, March 12, 2020, in New York. New York City is putting restrictions on gatherings to halt the spread of the new coronavirus in the coming days. — AP Photos/John Minchillo 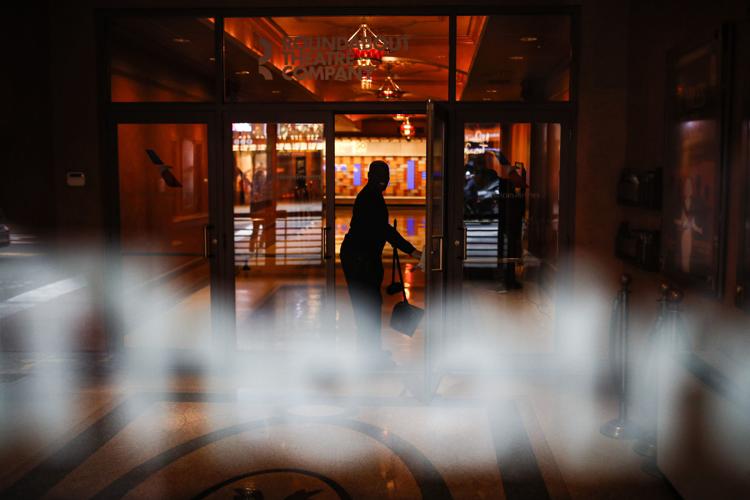 A custodian does an intense cleaning in the lobby of the Roundabout Theatre Company in Times Square on Thursday, March 12, 2020, in New York.

A pedestrian wearing a face mask stops in Times Square, Thursday, March 12, 2020, in New York. New York City is putting restrictions on gatherings to halt the spread of the new coronavirus in the coming days. — AP Photos/John Minchillo

A custodian does an intense cleaning in the lobby of the Roundabout Theatre Company in Times Square on Thursday, March 12, 2020, in New York.

NEW YORK — New York’s governor ordered all Broadway theaters to shut their doors in the face of ongoing coronavirus concerns, plunging into darkness one of the city’s most popular tourist attractions and causing turmoil in the run-up to the Tony Awards.

Gov. Andrew Cuomo on Thursday banned gatherings of 500 or more in the city, effectively forcing the hand of Broadway producers who had previously said that Broadway would be “open for business” unless advised not to by the government.

Shows will resume the week of April 13, only 10 days before the official cut-off for eligibility for the Tony Awards. Cuomo said venues of under 500 can only be filled to half their capacity.

On Broadway, would-be theater attendees were turned away, some shaking their heads in disbelief. “I had been hoping to catch one but it’s all canceled,” said Quinn Heath, 24, who was visiting from Boston.

Closing all Broadway theaters for a month is unprecedented, said Laurence Maslon, an arts professor at New York University’s Tisch School of the Arts. “Nothing comes close to this amount of time ever.”

The move comes a day after Broadway’s two largest theater chains revealed that a part-time usher and security guard who worked at two theaters in recent days tested positive for COVID-19 and was under quarantine.

Actors’ Equity Association, which represents more than 51,000 actors and stage managers nationwide, called the governor’s decision “important” and urged lawmakers to come to the aid of workers in the arts.

“Today’s decision means tremendous uncertainty for thousands who work in the arts, including the prospect of lost income, health insurance and retirement savings,” the group said in a statement. “For every middle-class actor you see onstage, there are dozens of other workers behind the scenes and in an administrative capacity.”

The pressure on Broadway to go dark steadily increased as other entertainment hubs shuttered, including Carnegie Hall, the Metropolitan Opera, the NBA, NHL, CinemaCon, Coachella and Major League Soccer.

Actors took to Twitter to share their sadness. “My heart is with all my friends and colleagues,” wrote Tony Award-nominee Judy Kuhn. “This is really bad for everyone who depends on the theater for their livelihoods.” Kerry Butler, a Tony-nominated star of “Beetlejuice,” said the shuttering “is the right move to keep everyone safe.”

For most people, the new coronavirus causes only mild or moderate symptoms, such as fever and cough. For some, especially older adults and people with existing health problems, it can cause more severe illness, including pneumonia.

The vast majority of people recover from the new virus. According to the World Health Organization, people with mild illness recover in about two weeks, while those with more severe illness may take three to six weeks to recover.

Other theaters far from Broadway have closed their doors, including the Wallis Annenberg Center for the Performing Arts in California, which canceled or postponed all productions and programs through March 31. The 5th Avenue Theatre in Seattle closed its doors, citing the state’s mandated cancellation of public gatherings. The 1,600 seat Curran Theater in San Francisco decided to scrap performances of “Harry Potter and the Cursed Child.”

Broadway producers were cautious until now, with a wait-and-see approach for an industry that grossed $1.8 billion last season. The Broadway League, a trade organization representing producers and theater owners, recommended that actors refrain from greeting fans at the stage door.

The league said it had increased the frequency of cleaning and disinfecting all public and backstage areas. It also added alcohol-based sanitizer dispensers for public use in the lobby of every theater.

Producers have been historically unwilling to cancel shows, which had an average paid admission last week of over $100. The last time they did so was in 2016, when a ban on travel in New York and the suspension of public transportation due to snow forced theater owners to cancel one day’s shows. Superstorm Sandy in 2012 darkened Broadway for four days and cost more than $8.5 million in lost revenue. Broadway theaters stayed open during the 1918 influenza epidemic.

Broadway is particularly vulnerable to the new coronavirus because its audience skews older, thousands of people are packed into small seats for every show and the industry is dependent on tourism. Of the 14.8 million admissions in the 2018-2019 season, 65% were made by tourists — 46% from Americans outside New York and 19% from other countries.

The shuttering of all 41 Broadway theaters will cause chaos to the spring theatrical calendar, which culminates in the Tony Awards on May 19. Several shows — including “Company,” “Caroline, Or Change,” “Diana” and “Mrs. Doubtfire” — had scheduled to open during the time when theaters are closed.

Maslon noted that many of the spring’s biggest shows were waiting to open and he saw no reason why the Broadway League wouldn’t adjust its eligibility date. “I think they have to extend the season,” he said.

Established shows will likely weather the storm better than one’s waiting to open. “If it’s ‘Lion King,’ they’ll just pick up where they left off. But for shows like ‘Diana’ or ‘Hangman’ or ‘Company,’ which are still in previews and still trying to figure it out, it’s going to be very complicated.”

Last week, attendance was actually higher than the previous week, but many believed that Broadway would not be able to avoid the effects of the outbreak forever, especially if school groups and tourists decided to skip New York in big numbers.

U.S. airlines will continue to fly from Europe until later this week, even though European visitors are banned from coming to the United State…