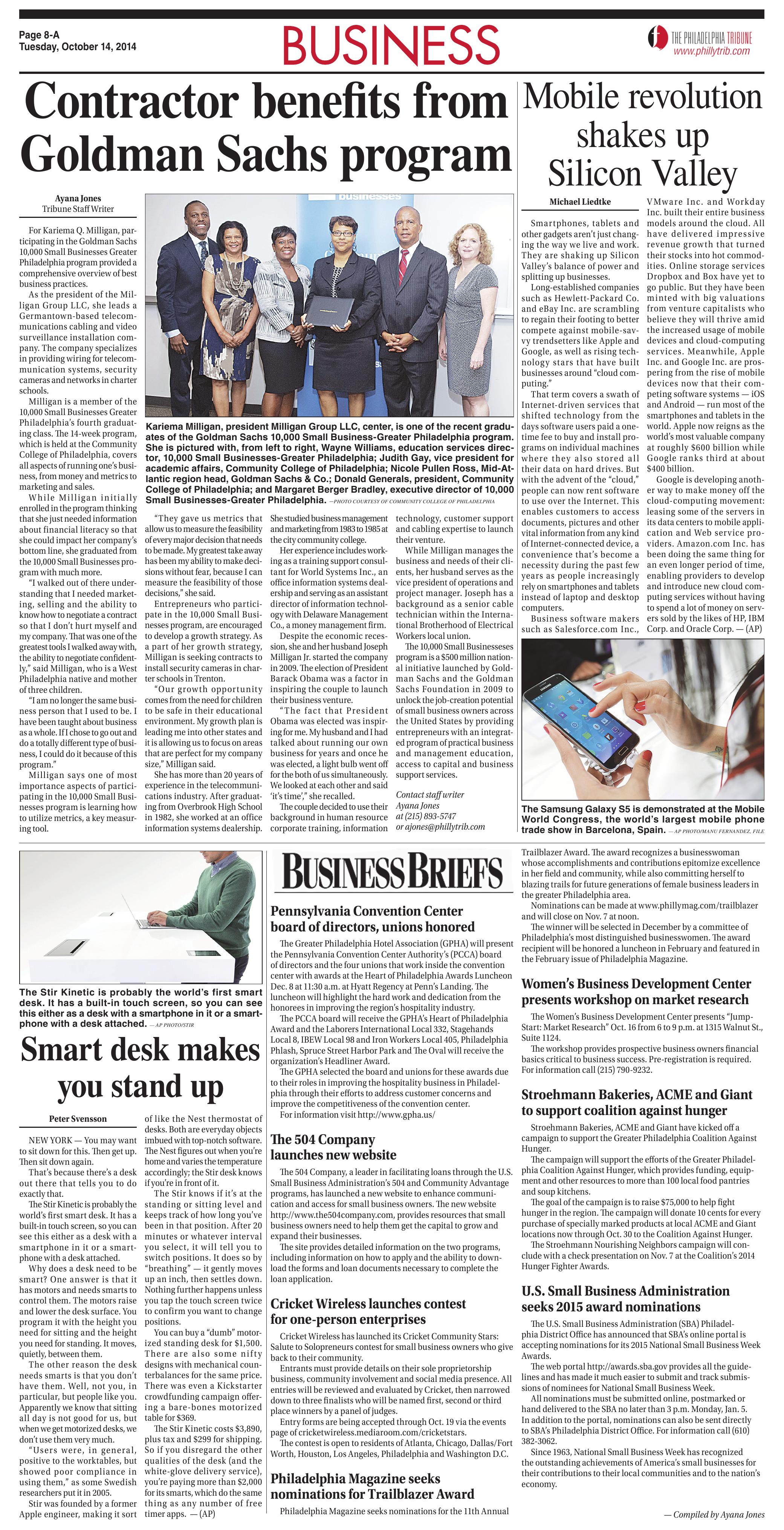 As the president of the Milligan Group LLC, she leads a Germantown-based telecommunications cabling and video surveillance installation company. The company specializes in providing wiring for telecommunication systems, security cameras and networks in charter schools.

Milligan is a member of the 10,000 Small Businesses Greater Philadelphia’s fourth graduating class. The 14-week program, which is held at the Community College of Philadelphia, covers all aspects of running one’s business, from money and metrics to marketing and sales.

While Milligan initially enrolled in the program thinking that she just needed information about financial literacy so that she could impact her company’s bottom line, she graduated from the 10,000 Small Businesses program with much more.

“I walked out of there understanding that I needed marketing, selling and the ability to know how to negotiate a contract so that I don’t hurt myself and my company. That was one of the greatest tools I walked away with, the ability to negotiate confidently,” said Milligan, who is a West Philadelphia native and mother of three children.

“I am no longer the same business person that I used to be. I have been taught about business as a whole. If I chose to go out and do a totally different type of business, I could do it because of this program.”

Milligan says one of most importance aspects of participating in the 10,000 Small Businesses program is learning how to utilize metrics, a key measuring tool.

Entrepreneurs who participate in the 10,000 Small Businesses program, are encouraged to develop a growth strategy. As a part of her growth strategy, Milligan is seeking contracts to install security cameras in charter schools in Trenton.

“Our growth opportunity comes from the need for children to be safe in their educational environment. My growth plan is leading me into other states and it is allowing us to focus on areas that are perfect for my company size,” Milligan said.

She has more than 20 years of experience in the telecommunications industry. After graduating from Overbrook High School in 1982, she worked at an office information systems dealership. She studied business management and marketing from 1983 to 1985 at the city community college.

Her experience includes working as a training support consultant for World Systems Inc., an office information systems dealership and serving as an assistant director of information technology with Delaware Management Co., a money management firm.

Despite the economic recession, she and her husband Joseph Milligan Jr. started the company in 2009. The election of President Barack Obama was a factor in inspiring the couple to launch their business venture.

“The fact that President Obama was elected was inspiring for me. My husband and I had talked about running our own business for years and once he was elected, a light bulb went off for the both of us simultaneously. We looked at each other and said ‘it’s time’,” she recalled.

The couple decided to use their background in human resource corporate training, information technology, customer support and cabling expertise to launch their venture.

While Milligan manages the business and needs of their clients, her husband serves as the vice president of operations and project manager. Joseph has a background as a senior cable technician within the International Brotherhood of Electrical Workers local union.

The 10,000 Small Businesseses program is a $500 million national initiative launched by Goldman Sachs and the Goldman Sachs Foundation in 2009 to unlock the job-creation potential of small business owners across the United States by providing entrepreneurs with an integrated program of practical business and management education, access to capital and business support services.

board of directors, unions honored

The Greater Philadelphia Hotel Association (GPHA) will present the Pennsylvania Convention Center Authority’s (PCCA) board of directors and the four unions that work inside the convention center with awards at the Heart of Philadelphia Awards Luncheon Dec. 8 at 11:30 a.m. at Hyatt Regency at Penn’s Landing. The luncheon will highlight the hard work and dedication from the honorees in improving the region’s hospitality industry.

The GPHA selected the board and unions for these awards due to their roles in improving the hospitality business in Philadelphia through their efforts to address customer concerns and improve the competitiveness of the convention center.

The 504 Company, a leader in facilitating loans through the U.S. Small Business Administration’s 504 and Community Advantage programs, has launched a new website to enhance communication and access for small business owners. The new website http://www.the504company.com, provides resources that small business owners need to help them get the capital to grow and expand their businesses.

The site provides detailed information on the two programs, including information on how to apply and the ability to download the forms and loan documents necessary to complete the loan application.

Cricket Wireless has launched its Cricket Community Stars: Salute to Solopreneurs contest for small business owners who give back to their community.

Entrants must provide details on their sole proprietorship business, community involvement and social media presence. All entries will be reviewed and evaluated by Cricket, then narrowed down to three finalists who will be named first, second or third place winners by a panel of judges.

Entry forms are being accepted through Oct. 19 via the events page of cricketwireless.mediaroom.com/cricketstars.

The contest is open to residents of Atlanta, Chicago, Dallas/Fort Worth, Houston, Los Angeles, Philadelphia and Washington D.C.

Philadelphia Magazine seeks nominations for the 11th Annual Trailblazer Award. The award recognizes a businesswoman whose accomplishments and contributions epitomize excellence in her field and community, while also committing herself to blazing trails for future generations of female business leaders in the greater Philadelphia area.

Nominations can be made at www.phillymag.com/trailblazer and will close on Nov. 7 at noon.

The winner will be selected in December by a committee of Philadelphia’s most distinguished businesswomen. The award recipient will be honored a luncheon in February and featured in the February issue of Philadelphia Magazine.

Stroehmann Bakeries, ACME and Giant to support coalition against hunger

Stroehmann Bakeries, ACME and Giant have kicked off a campaign to support the Greater Philadelphia Coalition Against Hunger.

The campaign will support the efforts of the Greater Philadelphia Coalition Against Hunger, which provides funding, equipment and other resources to more than 100 local food pantries and soup kitchens.

The goal of the campaign is to raise $75,000 to help fight hunger in the region. The campaign will donate 10 cents for every purchase of specially marked products at local ACME and Giant locations now through Oct. 30 to the Coalition Against Hunger.

The Stroehmann Nourishing Neighbors campaign will conclude with a check presentation on Nov. 7 at the Coalition’s 2014 Hunger Fighter Awards.

The web portal http://awards.sba.gov provides all the guidelines and has made it much easier to submit and track submissions of nominees for National Small Business Week.

All nominations must be submitted online, postmarked or hand delivered to the SBA no later than 3 p.m. Monday, Jan. 5. In addition to the portal, nominations can also be sent directly to SBA’s Philadelphia District Office. For information call (610) 382-3062.

Since 1963, National Small Business Week has recognized the outstanding achievements of America’s small businesses for their contributions to their local communities and to the nation’s economy.

The Stir Kinetic is probably the world’s first smart desk. It has a built-in touch screen, so you can see this either as a desk with a smartphone in it or a smartphone with a desk attached. — AP Photo/Stir

NEW YORK — You may want to sit down for this. Then get up. Then sit down again.

That’s because there’s a desk out there that tells you to do exactly that.

The Stir Kinetic is probably the world’s first smart desk. It has a built-in touch screen, so you can see this either as a desk with a smartphone in it or a smartphone with a desk attached.

The other reason the desk needs smarts is that you don’t have them. Well, not you, in particular, but people like you. Apparently we know that sitting all day is not good for us, but when we get motorized desks, we don’t use them very much.

“Users were, in general, positive to the worktables, but showed poor compliance in using them,” as some Swedish researchers put it in 2005.

Stir was founded by a former Apple engineer, making it sort of like the Nest thermostat of desks. Both are everyday objects imbued with top-notch software. The Nest figures out when you’re home and varies the temperature accordingly; the Stir desk knows if you’re in front of it.

The Stir knows if it’s at the standing or sitting level and keeps track of how long you’ve been in that position. After 20 minutes or whatever interval you select, it will tell you to switch positions. It does so by “breathing” — it gently moves up an inch, then settles down. Nothing further happens unless you tap the touch screen twice to confirm you want to change positions.

You can buy a “dumb” motorized standing desk for $1,500. There are also some nifty designs with mechanical counterbalances for the same price. There was even a Kickstarter crowdfunding campaign offering a bare-bones motorized table for $369.

The Stir Kinetic costs $3,890, plus tax and $299 for shipping. So if you disregard the other qualities of the desk (and the white-glove delivery service), you’re paying more than $2,000 for its smarts, which do the same thing as any number of free timer apps. — (AP)

Smartphones, tablets and other gadgets aren’t just changing the way we live and work. They are shaking up Silicon Valley’s balance of power and splitting up businesses.

Long-established companies such as Hewlett-Packard Co. and eBay Inc. are scrambling to regain their footing to better compete against mobile-savvy trendsetters like Apple and Google, as well as rising technology stars that have built businesses around “cloud computing.”

That term covers a swath of Internet-driven services that shifted technology from the days software users paid a one-time fee to buy and install programs on individual machines where they also stored all their data on hard drives. But with the advent of the “cloud,” people can now rent software to use over the Internet. This enables customers to access documents, pictures and other vital information from any kind of Internet-connected device, a convenience that’s become a necessity during the past few years as people increasingly rely on smartphones and tablets instead of laptop and desktop computers.

Business software makers such as Salesforce.com Inc., VMware Inc. and Workday Inc. built their entire business models around the cloud. All have delivered impressive revenue growth that turned their stocks into hot commodities. Online storage services Dropbox and Box have yet to go public. But they have been minted with big valuations from venture capitalists who believe they will thrive amid the increased usage of mobile devices and cloud-computing services. Meanwhile, Apple Inc. and Google Inc. are prospering from the rise of mobile devices now that their competing software systems — iOS and Android — run most of the smartphones and tablets in the world. Apple now reigns as the world’s most valuable company at roughly $600 billion while Google ranks third at about $400 billion.

Google is developing another way to make money off the cloud-computing movement: leasing some of the servers in its data centers to mobile application and Web service providers. Amazon.com Inc. has been doing the same thing for an even longer period of time, enabling providers to develop and introduce new cloud computing services without having to spend a lot of money on servers sold by the likes of HP, IBM Corp. and Oracle Corp. — (AP)

Click and hold your mouse button on the page to select the area you wish to save or print. You can click and drag the clipping box to move it or click and drag in the bottom right corner to resize it. When you're happy with your selection, click the checkmark icon next to the clipping area to continue.