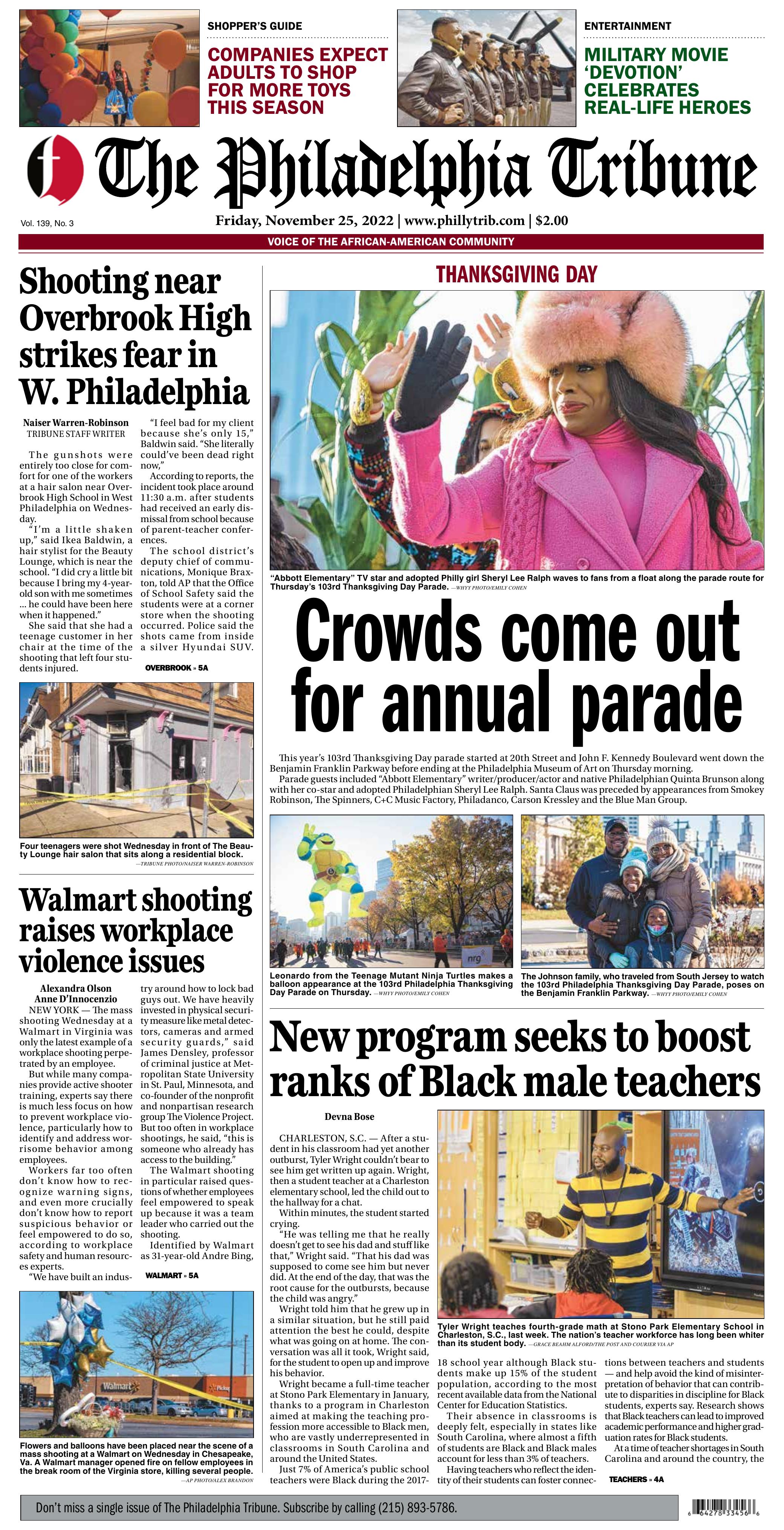 CHARLESTON, S.C. — After a student in his classroom had yet another outburst, Tyler Wright couldn’t bear to see him get written up again. Wright, then a student teacher at a Charleston elementary school, led the child out to the hallway for a chat.

Within minutes, the student started crying.

“He was telling me that he really doesn’t get to see his dad and stuff like that,” Wright said. “That his dad was supposed to come see him but never did. At the end of the day, that was the root cause for the outbursts, because the child was angry.”

Wright told him that he grew up in a similar situation, but he still paid attention the best he could, despite what was going on at home. The conversation was all it took, Wright said, for the student to open up and improve his behavior.

Wright became a full-time teacher at Stono Park Elementary in January, thanks to a program in Charleston aimed at making the teaching profession more accessible to Black men, who are vastly underrepresented in classrooms in South Carolina and around the United States.

Just 7% of America’s public school teachers were Black during the 2017-18 school year although Black students make up 15% of the student population, according to the most recent available data from the National Center for Education Statistics.

Their absence in classrooms is deeply felt, especially in states like South Carolina, where almost a fifth of students are Black and Black males account for less than 3% of teachers.

Having teachers who reflect the identity of their students can foster connections between teachers and students — and help avoid the kind of misinterpretation of behavior that can contribute to disparities in discipline for Black students, experts say. Research shows that Black teachers can lead to improved academic performance and higher graduation rates for Black students.

At a time of teacher shortages in South Carolina and around the country, the presence of Black teachers also can make it more likely for Black students to pursue careers in education themselves.

“The issue starts fairly young,” said Eric Duncan, a member of the policy team at the Education Trust, a nonprofit advocacy organization. “They get negative impressions of school because they are traditionally overdisciplined or misidentified in terms of behavior challenges, when they may have some other issues or challenges that should be addressed in a more culturally proficient way.”

There are other barriers to teaching for Black men. Many come from low-income families and face pressure to find higher-paying jobs, and there are license requirements that were deliberately created to prevent people of color from becoming teachers, Duncan said.

The program in Charleston, Men of CHS Teach, is a partnership between the University of South Carolina and the Charleston County School District. It places new teachers in elementary classrooms even if they haven’t participated in a student teacher program and creates an alternative pathway for them to get teaching licenses.

CCSD decided to focus on recruiting elementary teachers because it’s typically difficult to fill those positions with men, and research shows that if Black students have a teacher of color in elementary school, they’re less likely to drop out of high school and more likely to consider college. For Black boys of low-income backgrounds, those effects are even greater.

Program organizers hope to hire 20 male teachers of color within the next five years. Close to half of the district’s student population is non-white.

Wright was one of the program’s first inductees. He decided he wanted to teach after working as a student concerns specialist at one of the district’s high schools. A few years later, Wright is leading a classroom of his own.

The South Carolina districts that have seen the greatest increase in Black male teachers in recent years are Charleston, York 3, Richland 1 and Aiken, with a net total of almost 80 new hires from 2017 to 2021. However, they still have a small share of Black male teachers overall.

Statewide, the racial demographics of teachers barely changed between 2016 and 2021, according to an analysis of state teacher workforce data.

The program in Charleston was partially inspired by Call Me MiSTER, a Clemson University program that aims to recruit, train and certify men of color to become elementary school teachers in South Carolina.

Mark Joseph, the program’s director, said they’ve seen a decrease in applicants in recent years and have had to put more effort into recruitment. It’s a new era of teaching after the pandemic, Joseph said, and the program has had to adapt.

“We took a different approach in terms of talking about leadership, talking about college, talking about what it’s like being a part of a program that provides support, encouragement, brotherhood and teamwork,” he said.

One realization, he said, has been that teachers are ambassadors for the teaching profession.

After all, the teachers they’re looking to recruit aren’t coming out of thin air — they’re sitting in classrooms across South Carolina.

Flowers and balloons have been placed near the scene of a mass shooting at a Walmart on Wednesday in Chesapeake, Va. A Walmart manager opened fire on fellow employees in the break room of the Virginia store, killing several people.

These photos show top from left, Tyneka Johnson, Brian Pendleton and Randy Blevins, and, bottom from left, Kellie Pyle and Lorenzo Gamble, who Chesapeake, Va., police identified as victims of a shooting that occurred late Tuesday at a Walmart in Chesapeake. —Chesapeake Police Department via AP

Briana Tyler uses her hands like a gun as she demonstrates the gunman shooting indiscriminately, as she talks Wednesday about witnessing the mass shooting at a Walmart in Chesapeake, Va. —AP Photo/Alex Brandon

NEW YORK — The mass shooting Wednesday at a Walmart in Virginia was only the latest example of a workplace shooting perpetrated by an employee.

But while many companies provide active shooter training, experts say there is much less focus on how to prevent workplace violence, particularly how to identify and address worrisome behavior among employees.

“We have built an industry around how to lock bad guys out. We have heavily invested in physical security measure like metal detectors, cameras and armed security guards,” said James Densley, professor of criminal justice at Metropolitan State University in St. Paul, Minnesota, and co-founder of the nonprofit and nonpartisan research group The Violence Project. But too often in workplace shootings, he said, “this is someone who already has access to the building.”

The Walmart shooting in particular raised questions of whether employees feel empowered to speak up because it was a team leader who carried out the shooting.

Identified by Walmart as 31-year-old Andre Bing, he opened fire on fellow employees in the break room of the Chesapeake store, killing six people and leaving six others wounded. Police said he then apparently killed himself.

Employee Briana Tyler, who survived the shooting, said Bing appeared not to be aiming at anyone in particular. Tyler, who started at Walmart two months ago, said she never had a negative encounter with Bing, but others told her that he was “the manager to look out for.” She said Bing had a history of writing people up for no reason.

Walmart launched a computer-based active shooter training in 2015, which focused on three pillars: avoid the danger, keep your distance and lastly, defend. Then, in 2019 after a mass shooting at an El Paso, Texas, store in which an outside gunman killed 22 people, Walmart addressed the threat to the public by discontinuing sales of certain kinds of ammunition and asked that customers no longer openly carry firearms in its stores. It now sells only hunting rifles and related ammunition.

Walmart didn’t specifically respond Wednesday to questions seeking more detail about its training and protocols to protect its own employees. The company only said that it routinely reviews its training policies and will continue to do so.

Densley said that employers need to create open channels for workers to voice concerns about employees’ behavior, including confidential hotlines. He noted that too often attention is focused on the “red flags” and workers should be looking for the “yellow flags” — subtle changes in behavior, like increased anger or not showing up for work. Densley said managers need to work with those individuals to get them counseling and do regular check-ins.

In fact, the Department of Homeland Security’s active shooting manual states that human resources officials have a responsibility to “create a system for reporting signs of potential violence behavior.” It also encourages employees to report concerning behavior such as increased absenteeism and repeated violation of company policies.

But many employers may not have such prevention policies in place, said Liz Peterson, Quality Manager at the Society for Human Resource Management, an organization of more than 300,000 human resources professionals.

She noted that in a 2019 SHRM survey of its members, 55% of HR professionals said they didn’t know if their organizations had policies to prevent workplace violence, and another 9% said they lacked such programs. That was in contrast to the 57% of HR managers who said they did have training on how to respond to violence.

A recent federal government report examining workplace violence over three decades found that workplace homicides have risen in recent years, although they remain sharply down from a peak in the mid-1990s.

But the country’s spike in mass public shootings is raising awareness among employers of the need to address mental health in the workplace and prevent violence — and of the liabilities employers can face if they ignore warning signs, Peterson said.

In one high-profile example, the family of a victim filed a wrongful death lawsuit earlier this year against the Northern California Transportation agency, alleging it failed to address the history of threatening behavior of an employee who shot and killed nine co-workers at a light railyard in San Jose in 2021.

The transportation agency released more than 200 pages of emails and other documents showing the shooter, Samuel James Cassidy, had been the subject of four investigations into workplace conduct, and one worker had worried that Cassidy could “go postal.” That expression stems from one of the deadliest workplace shooting in U.S. history, when a postal worker shot and killed 14 workers in Edmond, Oklahoma, in 1986.

“Workplace violence is a situation that you never think is going to happen to your organization until it does, and unfortunately, it’s important to prepare for them because they are becoming more commonplace,” Peterson said.

Click and hold your mouse button on the page to select the area you wish to save or print. You can click and drag the clipping box to move it or click and drag in the bottom right corner to resize it. When you're happy with your selection, click the checkmark icon next to the clipping area to continue.