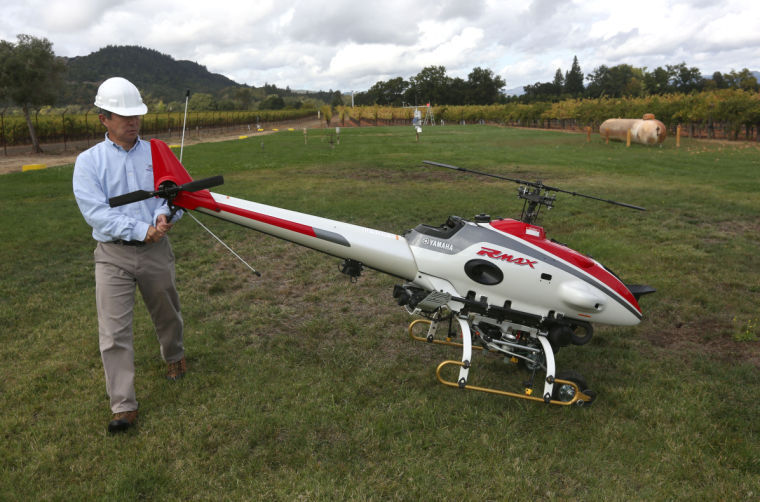 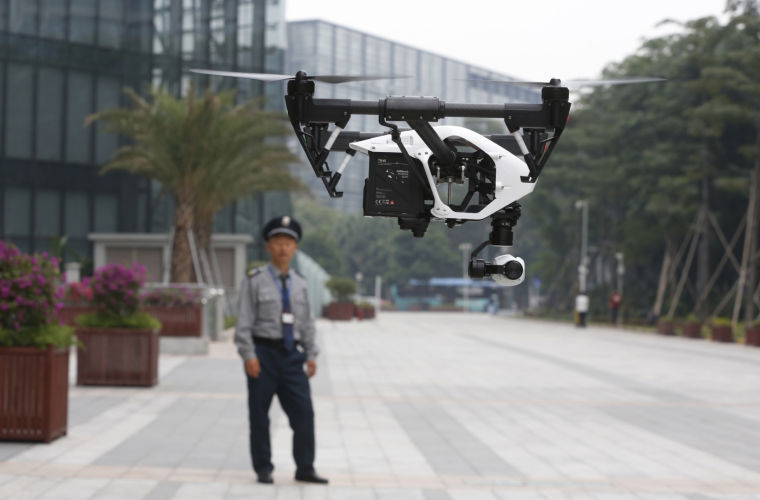 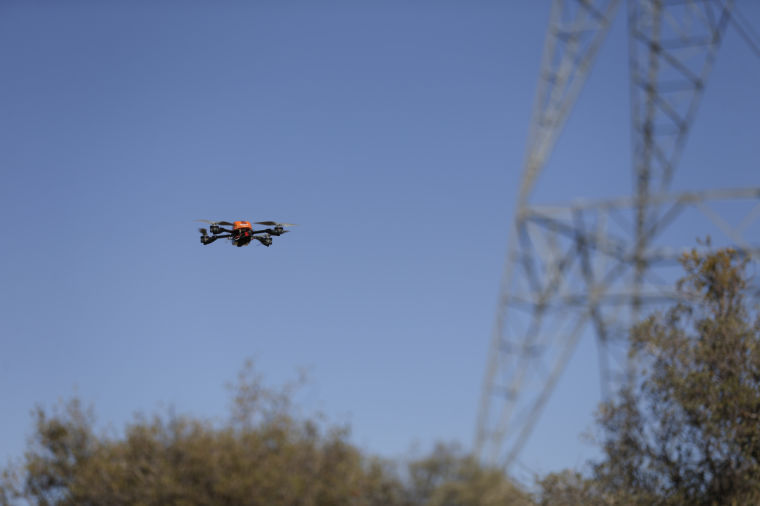 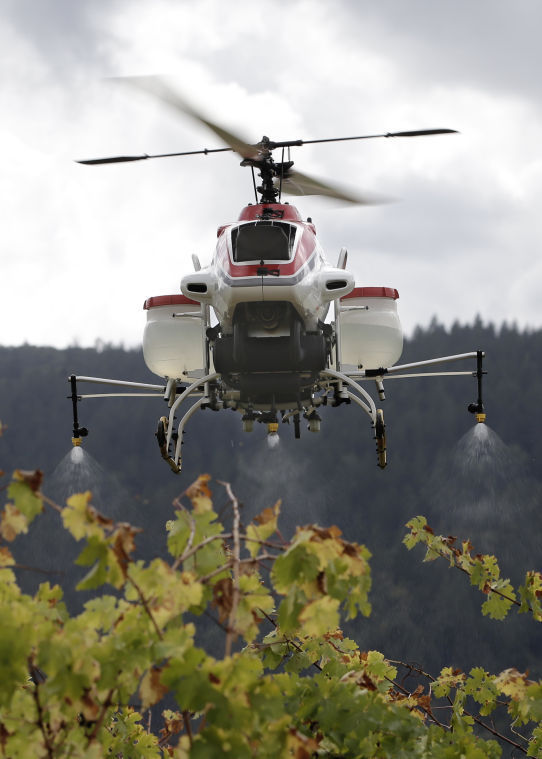 The Yamaha RMax unmanned helicopter sprays water over grapevines during a demonstration of its aerial application capabilities in Oakville, Calif. — AP Photo/Rich Pedroncelli 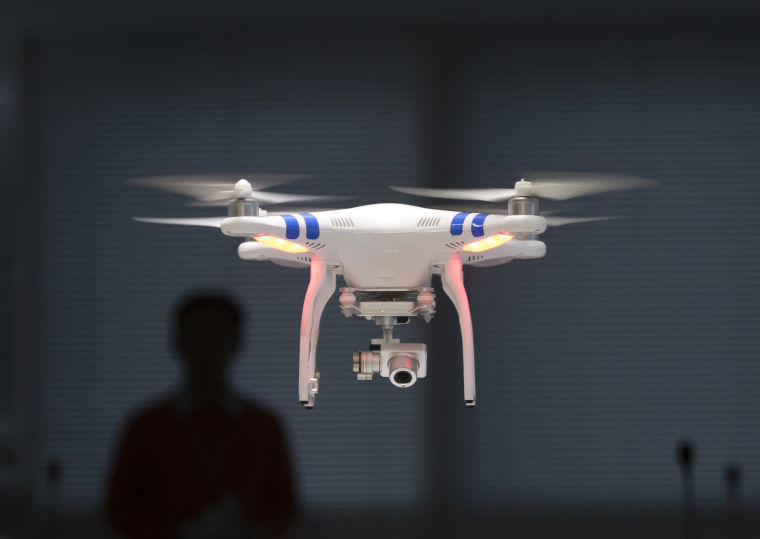 The Yamaha RMax unmanned helicopter sprays water over grapevines during a demonstration of its aerial application capabilities in Oakville, Calif. — AP Photo/Rich Pedroncelli

BOULEVARD, Calif. — The drones are coming.

Not as flying deliverymen that bring diapers, books or soup cans to your home, a vision put forth by Amazon CEO Jeff Bezos to much fanfare a little more than a year ago.

Instead, drones will help spray crops, inspect high-voltage power lines and hover over movie sets to provide directors with new vantage points. They will also work for insurance companies, real estate agencies, ski resorts and dozens of other businesses.

For now, this all remains theoretical. Except for a few locations, U.S. airspace is closed to commercial drones. Regulators have said the danger is too great, and they want to go slow easing unmanned aircraft into the already crowded skies.

Advocates of the young drone industry complain the long wait is keeping them grounded. Big-money investors are generally staying away, waiting for clear government guidelines. And the blanket flight prohibition has prevented companies from experimenting and advancing the technology. That includes developing sophisticated collision-avoidance systems or finding ways for the aircraft to navigate without human help.

“Most of these drones have very limited safety features,” said Maryanna Saenko, an analyst with science and technology consultancy Lux Research. If one crashes, “it’s a four- or five-pound brick coming out of the sky.”

Most Americans associate drones with the military, which uses unmanned aircraft to survey battlefields and hunt terrorists. In a similar manner, businesses of all kinds envision using them to perform jobs that are too difficult or dangerous for humans.

If safety and regulatory obstacles can be overcome, within the next three years, drones and the companies that support them could generate $13.7 billion worth of economic activity in the U.S. and create 70,000 new jobs, according to the industry’s trade group, the Association for Unmanned Vehicle Systems International.

That’s just domestically. In less than a decade, as many as 32,000 commercial drones could be flying worldwide, according to aerospace consultancy Teal Group. Only a third will be in the U.S.

The Federal Aviation Administration (FAA) plans to release guidelines soon about who can fly drones weighing less than 55 pounds and under what conditions. They might include the extremely stringent — and costly — requirement operators have a pilot’s license.

That means some of the most ambitious drone ideas, like Amazon’s package-delivery system, will probably have to wait. First, drones will tackle the hard-to-do jobs, the dangerous industrial tasks, often in remote places.

To see the potential of drones, go to a plateau in the Southern California desert covered with cacti and brush. There, Teena Deering, a former Navy helicopter pilot who later taught drone warfare, is testing the idea of using unmanned aircraft to inspect power lines.

A generation ago, military pilots would retire and fly for airlines. Today, they are working on drones.

“It’s just the way of the future,” Deering said.

With a few quick movements of a wireless controller — the type used for model airplanes — Deering sends a 1-pound drone racing into the sky around a 165-foot tower. Live video streams back from the drone’s camera, showing her the condition of the lines.

Normally, the remote lines are inspected by helicopter, a difficult job that costs $1,200 an hour. But San Diego Gas and Electric thinks drones might be a cheaper, faster way.

Perhaps the biggest industry ripe for drone use is farming. With the help of GPS mapping, drones can survey an entire farm, find bugs or soil that is too dry or too low in nutrients and then send the exact coordinates back to a tractor that will apply pesticide, water or fertilizer only to areas in need.

Taking it a step further, there are 2,500 unmanned miniature helicopters currently used by farmers in Japan to spray pesticides in hilly areas where tractors might roll over. Similar drones are operating in South Korean and Australia. In the U.S., the $150,000 helicopters are being considered for the steep slopes of California vineyards.

Farmers aren’t expected to buy the costly drones themselves but will hire new services for specific jobs.

The FAA estimates 7,500 drones will be flying in the U.S. within five years. The industry puts the number in the hundreds of thousands. Compare that to the four largest U.S. airlines, with their combined fleet of 4,728 planes.

“The FAA is just scared to death,” said David Bridges, a mechanical engineering professor testing drones at Texas A&M University in Corpus Christi. “U.S. airspace is one of the safest in the world. It’s their job to keep it that way.”

FAA Administrator Michael Huerta said drone technology is promising but needs to be phased in responsibly.

“We have a duty to protect people in the air and on the ground,” Huerta said.

Some of the greatest danger is close to airports, where hundreds of airline passengers could be at risk from errant drones. The FAA has reports of nearly 200 cases in the past 10 months where drones got too close for comfort to manned airplanes.

Even the military, with its expert pilots, crashes drones. The Air Force has lost 116 unmanned aircraft in the last decade and now has a rate of about five destroyed for every 100,000 hours of flying time.

While companies wait, more and more hobbyists are putting drones in the skies. Many can be operated with an iPhone or Android smartphone. Some cost just $300. French company Parrot has sold 670,000 drones worldwide in just the past four years.

The problem is today’s aircraft lack brains. They must either be controlled remotely by a pilot or fly a predetermined route from one coordinate to another.

Technology that senses obstacles and avoids them isn’t proven. Battery life is limited. And questions remain about hackers or terrorists intercepting and controlling drones.

Amazon said its drone delivery service could someday get packages to customers in 30 minutes or less.

Through its Prime Air service, Amazon aims to have drones flying 50 mph and capable of carrying up to 5 pounds.

“They will become as normal as seeing delivery trucks driving down the street,” said Paul Misner, Amazon’s global vice president of public policy.

Not everybody is so optimistic. Drones, they have said, aren’t a cost-effective replacement for existing systems.

German delivery company Deutsche Post DHL is already testing a drone, but only to a remote tourist island in the North Sea and just for urgent deliveries of medicine.

“It doesn’t replace the solid network we have developed for our ground transportation,” Gupta said. “This is not like some sci-fi movie.” — (AP)