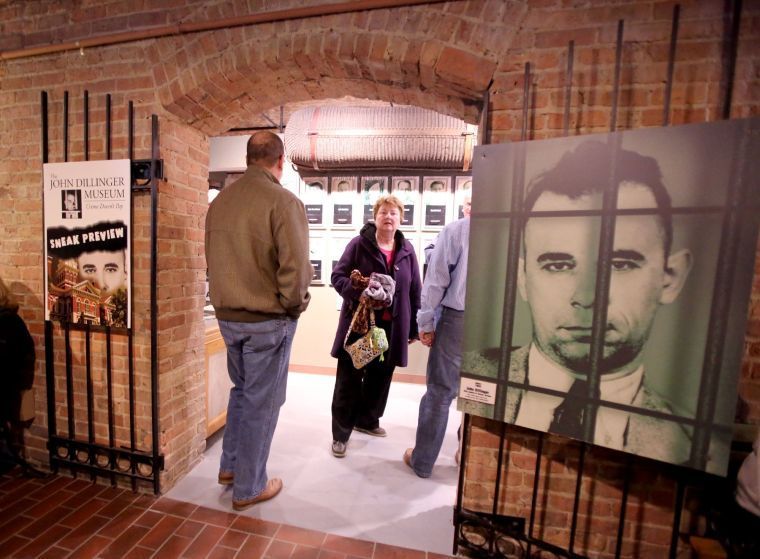 Marti Wheeler, President of the Lake Courthouse Foundation, left, and Crown Point Mayor Visitors get a sneak preview of the new Dillinger Museum that will open in July at the old Lake County Courthouse in Crown Point, Ind.— AP Photos/The Times, John Luke 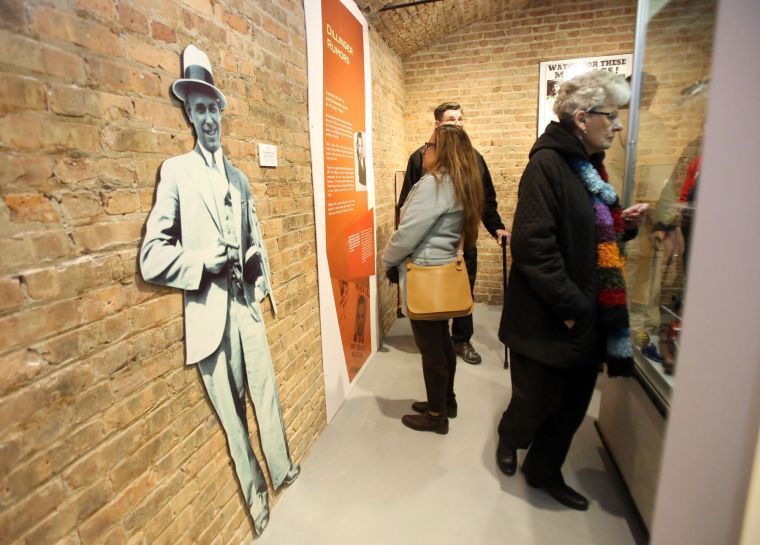 Visitors look over exhibits during a preview of the new Dillinger Museum. 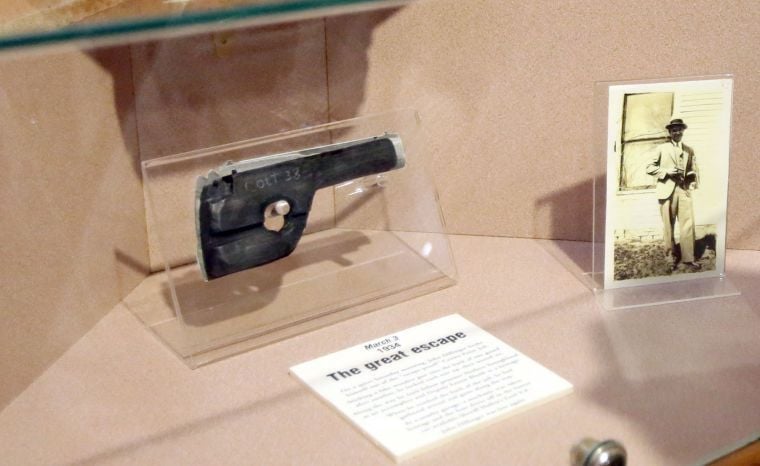 The famous Dillinger escape gun is displayed next to a photograph of John Dillinger posing with the wooden weapon.

Marti Wheeler, President of the Lake Courthouse Foundation, left, and Crown Point Mayor Visitors get a sneak preview of the new Dillinger Museum that will open in July at the old Lake County Courthouse in Crown Point, Ind.— AP Photos/The Times, John Luke

Visitors look over exhibits during a preview of the new Dillinger Museum.

The famous Dillinger escape gun is displayed next to a photograph of John Dillinger posing with the wooden weapon.

CROWN POINT, Ind. — The theme of the John Dillinger Museum is that crime doesn’t pay, but Crown Point is hoping the story of his life pays plenty in bringing visitors to the old Lake County Courthouse shops and downtown.

The South Shore Convention and Visitors Authority, the Courthouse Foundation and the city held the first of what will be two openings for the museum Tuesday. It coincided with the 81st anniversary of the day the Depression-era bank robber escaped from the old Lake County jail, The (Munster) Times reported.

“We are pleased to bring you a small taste of what the museum will be in a few months,” SSCVA President and CEO Speros Batistatos told the crowd that filled the hall outside the museum. He said the grand opening for the finished product will be July 22, the anniversary of Dillinger’s infamous end outside the Biograph Theater in Chicago.

“We are not here to glorify or say John Dillinger was a hero,” Crown Point Mayor David Uran said. “There are a multitude of stories to tell in Crown Point, and this is a story we want to share with our residents and those who come to visit the city.”

Marty Wheeler, chairman of the Courthouse Foundation board, said, “I’m very excited about having all of you here. I think you will be very surprised at what you see. And remember there are stores at the other end of the hall, and that’s the reason we brought the museum here.”

The end of the Dillinger story is all that’s depicted so far with diagrams of the layout planned for the future depicting the rest of his life. The museum, previously in the SSCVA Visitors Center in Hammond, will occupy 2,000 square feet on the lower level of the courthouse. The displays offered Tuesday included the wooden gun Dillinger used in his escape from the jail and descriptions of how he and many other bandits of that era met their deaths.

Partially completed was a representation of a jail cell from that era with a wooden bucket prisoners had to use as a bathroom.

“If anyone thinks we are glamorizing a life, look at what we have here,” Batistatos said.

Batistatos said painters will begin work soon on the rest of the project. The SSCVA is deciding whether to contract out remaining work or do it with staff assisted by union workers for the parts requiring more skilled labor as has been done so far.

“We have new space to fill at the visitors center [vacated by the museum’s departure], so we have to be budget-conscious,” he said.

While the new museum will have items not previously seen at the visitors center location, one item that will not be making the transition to new quarters is the black 1933 Essex Terraplane 8, which was used in the movie “Public Enemies” starring Johnny Depp as Dillinger.

The car, known as the preferred model for Dillinger to steal and own, will be auctioned off May 2 in front of the north entrance to the courthouse. Its value is estimated between $20,000 and $27,000. — (AP)