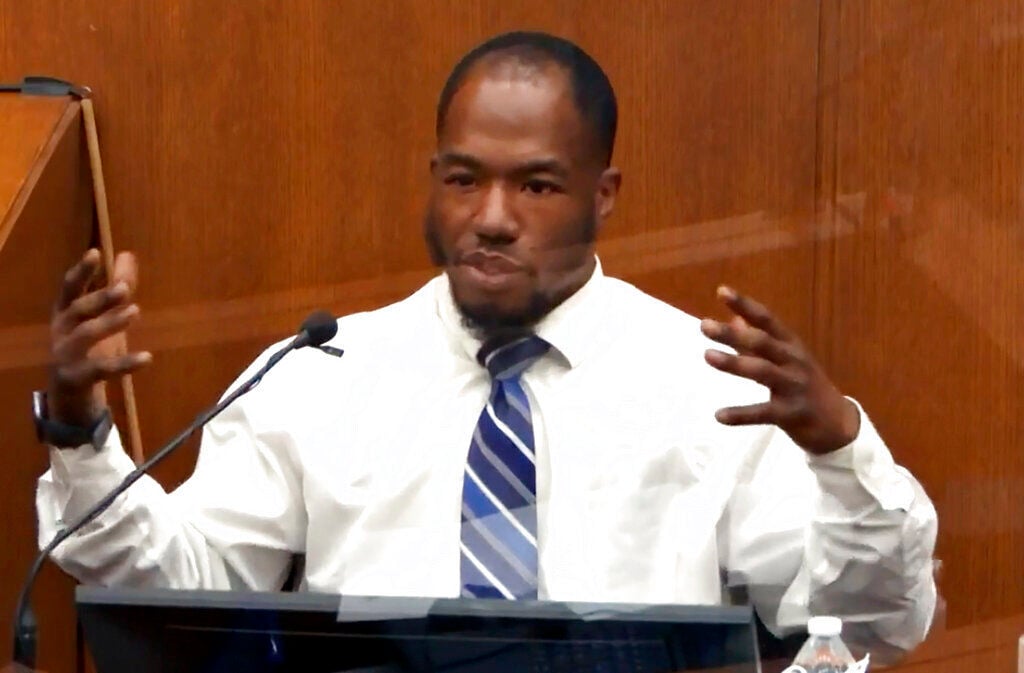 In this image from video, witness Donald Williams answers questions as Hennepin County Judge Peter Cahill presidesMarch 29, in the trial of former Minneapolis police officer Derek Chauvin, in the May 25, 2020, death of George Floyd at the Hennepin County Courthouse in Minneapolis, Minn. 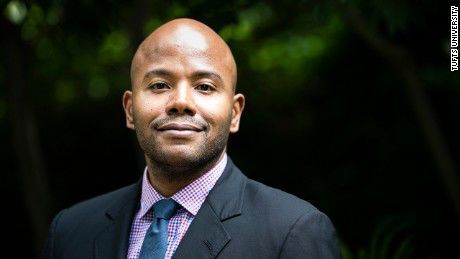 In this image from video, witness Donald Williams answers questions as Hennepin County Judge Peter Cahill presidesMarch 29, in the trial of former Minneapolis police officer Derek Chauvin, in the May 25, 2020, death of George Floyd at the Hennepin County Courthouse in Minneapolis, Minn.

The trial of Derek Chauvin on second-degree murder charges in the killing of George Floyd has cast a bright spotlight, one that forces Americans to re-confront the police violence that helped trigger a transformative social movement. It also demands we pay attention to the deeper connections between this act of violence — that so many of us are now reliving as we watch testimony unfold live — and America’s long and troubling history of racial injustice.

The testimony of witnesses and bystanders who watched Floyd die offer tragically compelling evidence of state-sanctioned violence against Black bodies. What happened to him resembled a public execution, one that echoes for many the anti-Black lynchings that marked the Jim Crow era.

The trial of Derek Chauvin is giving a personal face to political arguments and theoretical abstractions. The prosecution, armed with an over 9-minute-long video of Chauvin’s knee choking the life out of Floyd, has argued that this is a clear case of murder.

Chauvin’s defense attorney has countered that Floyd died as a result of preexisting medical issues and that Chauvin, who has pleaded not guilty to the charges against him, followed department protocols. The defense has played on longstanding racial stereotypes in characterizing Floyd as an out-of-control Black man whose superhuman strength required four officers to subdue him.

The first two days of witness testimony offered excruciatingly poignant details about Floyd’s death. The defense repeatedly tried to characterize Donald Williams II, a Black mixed martial arts fighter who witnessed the scene, as “angry” during cross examination. “You were angry,” defense attorney Eric Nelson, said at one point. “No, you can’t paint me out as angry. I was in a position that I had to be in control,” responded Williams.

Nelson’s efforts to discredit Williams, who at one point was moved to tears in describing the horrific nature of Floyd’s death, sought to undermine the justifiable emotions — from anger to grief to rage — of Black folk who have experienced these emotions far too often.

In video footage, Williams could be heard repeatedly excoriating officers, at times using harsh language, as Floyd’s life slipped away in full view of an increasingly stunned crowd. Defense efforts to blame the crowd as a contributing factor in Floyd’s death, causing a distraction to Chauvin and the other officers on the scene, are appalling.

Genevieve Hansen, a firefighter and EMT who happened upon the scene while taking a walk, testified that she repeatedly offered assistance to Floyd but her pleas were denied. “I was desperate to give help,” Hansen recalled in emotional testimony. Hansen broke down in tears describing her feelings of “distress” at being unable to help Floyd as he lay critically injured.

Of the six witnesses called last Tuesday, the most powerful words were spoken by those too young to appear on camera. Three high schoolers and a 9-year old recounted witnessing Floyd’s death. Darnella Frazier, who has been previously identified as recording the most widely known bystander video, testified that she recognized her own father, cousin, and family members in Floyd’s visage.

That an innocent child, teenagers and well-meaning bystanders had to bear witness to his death — including a firefighter with training that might have saved Floyd’s life — is truly extraordinary. For Black America however, there is nothing particularly unusual about Floyd’s death, with the exception of the national response in its aftermath.

Charles McMillian, a Black witness testifying on the trial’s third day, broke down in tears during his testimony. He seemed to relive the horrors of that day in real time. “I feel helpless,” McMillian tearfully observed after witnessing police body cam footage of Floyd’s arrest.

His emotional testimony visibly moved those in court, prompting the judge to call for a recess. Before that, McMillian recalled his mother’s death, emphasizing how those who saw Floyd’s death saw him as human and included him in the wider moral circle of their own lives, something Derek Chauvin was unable or unwilling to do.

What might be characterized as the Chauvin Defense continues a long and cruelly American tradition of devaluing Black life. This argument rests on the proposition that Black defendants and ordinary citizens are inherently guilty of whatever a white person alleges.

This year marks the 30th anniversary of the videotaped police beating of Los Angeles motorist Rodney King. The acquittal of the officers by a Simi Valley jury the next year sparked urban rebellion in Los Angeles, just as the deaths of Michael Brown and Freddie Gray led to civil unrest in Ferguson, Missouri, and Baltimore in 2014 and 2015. Those latter uprisings were part of the political and cultural ferment of the Black Lives Matter Movement, which argued that police killing of Black people represented a gateway to a panoramic system of injustice.

I’m left thinking of “To Kill a Mockingbird,” Harper Lee’s iconic portrait of racial gaslighting and white supremacy. The institutional racism that grotesquely deformed the criminal justice system in Lee’s time continues, despite major opposition and resistance, in our own. Lee’s enduring achievement lay in signaling to the reader that ideals of citizenship and dignity imbued in the American Dream were on trial alongside Tom Robinson. In Minneapolis, decades of history are on trial alongside Derek Chauvin.

The Chauvin trial illustrates how the replaying of trauma can also produce the potential for catharsis. Those witnesses shedding tears over George Floyd’s senseless death were also mourning for themselves. A just society does not put first responders in the position of watching a man’s life slip away, nor does it force children to witness the same. These scenes of trauma and violence, so often depersonalized in our national culture, have the power to reshape the social fabric of the entire nation.

Peniel E. Joseph is the Barbara Jordan chair in ethics and political values and the founding director of the Center for the Study of Race and Democracy at the LBJ School of Public Affairs at the University of Texas at Austin, where he is also a professor of history.