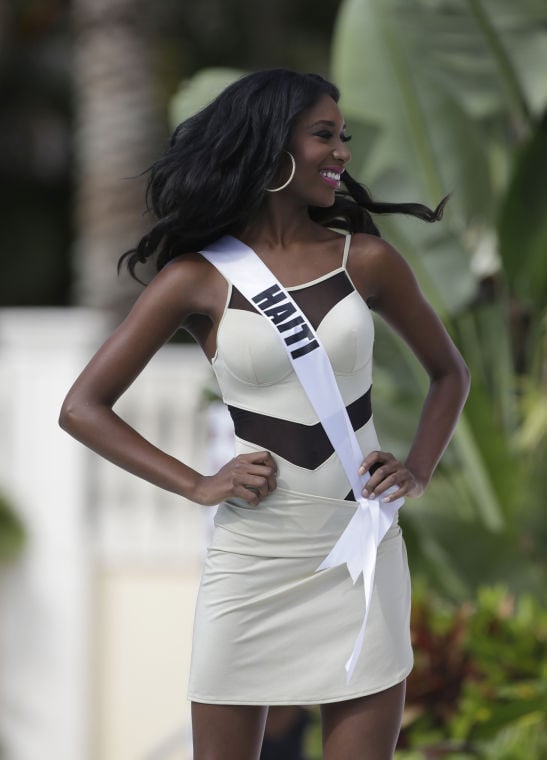 Miss Universe contestant Christie Desir, of Haiti, walks along the pool during the Yamamay swimsuit runway show on Wednesday in Doral, Fla. The Miss Universe pageant will be held Jan. 25 in Miami. — AP Photo/Lynne Sladky 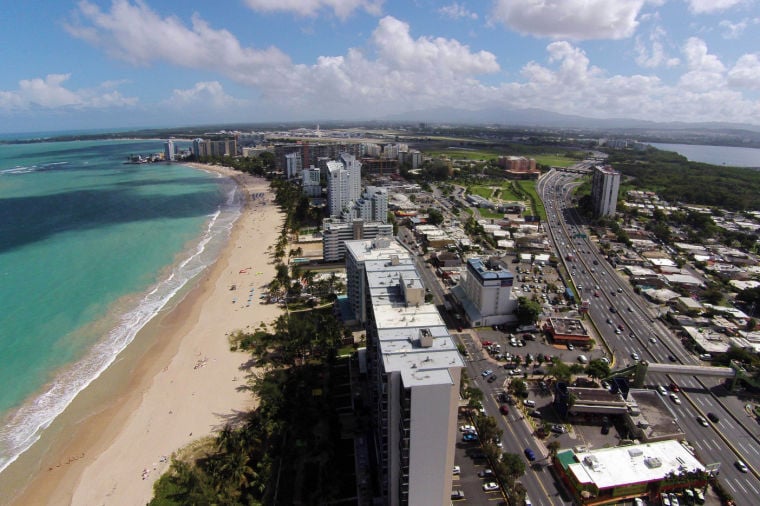 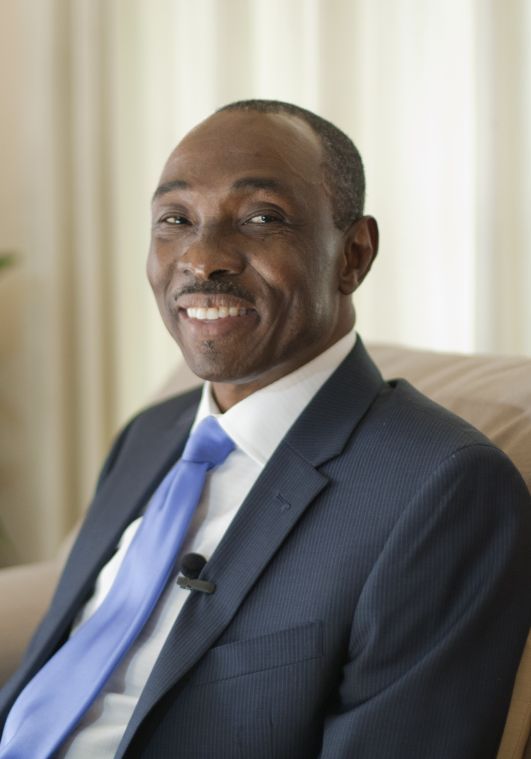 Haiti’s new Prime Minister Evans Paul during an interview at his government residence in Port-au-Prince, Haiti on Wednesday, Jan. 14, 2015. Paul, the former mayor of Port-au-Prince and presidential candidate, automatically became Prime Minister after both the Senate and Chamber of Deputies failed to approve him by Jan. 12 when the terms of both houses expired. Paul was named to run the day-to-day affairs of the government by President Michel Martelly, replacing Laurent Lamothe. — AP Photo/Dieu Nalio Chery

Miss Universe contestant Christie Desir, of Haiti, walks along the pool during the Yamamay swimsuit runway show on Wednesday in Doral, Fla. The Miss Universe pageant will be held Jan. 25 in Miami. — AP Photo/Lynne Sladky

Haiti’s new Prime Minister Evans Paul during an interview at his government residence in Port-au-Prince, Haiti on Wednesday, Jan. 14, 2015. Paul, the former mayor of Port-au-Prince and presidential candidate, automatically became Prime Minister after both the Senate and Chamber of Deputies failed to approve him by Jan. 12 when the terms of both houses expired. Paul was named to run the day-to-day affairs of the government by President Michel Martelly, replacing Laurent Lamothe. — AP Photo/Dieu Nalio Chery

HAVANA — Cuba will print bills of 200, 500 and 1,000 pesos that will start to circulate in February, a step forward in the government’s plan to unify its dual-currency system.

A Cuban Central Bank resolution published Thursday said the new banknotes will extend the range of the current bills, which only reach 100 pesos.

Most Cubans earn and buy goods in local pesos worth about 4 U.S. cents apiece. Tourism, one of the island’s main sources of foreign exchange, operates on the convertible peso, a special currency worth roughly one U.S. dollar.

The double currency allows Cuba to theoretically split the country between a realm of highly subsidized prices in Cuban pesos and a convertible-peso economy where prices more closely resemble those of U.S. or European cities. But the system has led to economic distortions and created a new class of privileged Cubans with access to convertible pesos.

Cuba’s government announced in 2013 that it would eliminate the double currency but did not set out a timetable for the switch.

This means that customers and businesses must increasingly handle larger quantities of cash, a problem accentuated by the fact that the country’s largest banknote, the 100-peso bill, is worth about 4 U.S. dollars.

Barbara Soto Sanchez, an official with state company Cimex, said most sales are carried out with 20- or 50-peso bills, which makes buying expensive products like electrical appliances or furniture difficult.

SAN JUAN, Puerto Rico — Supporters of Puerto Rican independence welcomed a 69-year-old islander home Thursday after serving jail time for his role in the 1983 holdup of a Wells Fargo depot in Connecticut that netted his militant group $7 million — the largest heist in U.S. history at the time.

Norberto Gonzalez Claudio arrived in the U.S. territory just hours after being released from a prison in Florida. About 150 supporters raised fists and waved Puerto Rican flags as Gonzalez emerged from the airport. Steadied by his wife, he stood on a bench and briefly addressed the crowd in a quiet voice.

Gonzalez eluded the FBI for decades until his arrest in May 2011 while on a morning walk in the central mountain town of Cayey. FBI agents believe he had been living in Puerto Rico all that time under a false name. In June 2012, he pleaded guilty to foreign transportation of stolen money and conspiracy to rob federally insured bank funds as part of a plea agreement.

Avelino Gonzalez, a 72-year-old brother convicted previously in the heist, told TheAssociated Press that they would never give up the fight for independence.

The brothers belonged to the militant group Los Macheteros. The group claimed responsibility for several robberies, killings and bombings, mostly in the 1970s and 1980s, but it has not been tied to any recent violent incidents.

None of the $7 million was recovered. Authorities say it was used to finance the attacks staged by Los Macheteros.

Google to test its first

SAN JUAN, Puerto Rico — Google announced Wednesday that it will unveil a modular smartphone in Puerto Rico this year as part of a pilot program that will allow people to choose their own hardware based on their needs and interests.

The company will partner with Mexico-based carrier Claro and local carrier Open Mobile to offer the product, which will be sold from free-standing stores that look like food trucks, said Jessica Beavers, a Google marketing executive.

She said Puerto Rico was chosen in part because more than 90 percent of households on the island of nearly 3.7 million people use a cellphone and 77 percent of Internet access occurs through mobile devices.

The pilot program is still being developed, but Beavers said she envisions stores first opening in the capital of San Juan, followed by Ponce, the island’s second largest city. Stores would eventually open in other cities.

Google would manufacture and sell the phone frame as well as modules created by individual manufacturers that can be added to it like Legos. Modules would range from a screen to a camera to speakers to even a pedometer, depending on people’s needs.

The company has had success with its Chromebook computers, which are lightweight, low-priced laptops that require Internet connections to access most programs and other features, but it relies on outside manufacturers for the product. It has had more difficulty selling devices it makes on its own. Google Glass, its Internet-connected eyewear, still hasn’t made it to the mass market more than two years after its release to developers and a digital media player called the Nexus Q was scrapped within a few months of its unveiling in 2012.

The island of 3.7 million people had 681 homicides in 2014, the lowest number in nearly 15 years and a drop of 40 percent since murders reached a record high of 1,164 three years ago. Violent crime overall fell 17 percent over the same period.

Credit for the decline goes to a number of factors, from increased efforts to prevent crime to a broader trend of declining violence across the United States and the Caribbean.

Luis Romero, whose son was fatally stabbed during a holdup in 2011, is among the Puerto Ricans who have helped turn the tide. Following the death of his 20-year-old son, Romero used his skills as the owner of a telecommunications services company to create a mobile app that allows users to anonymously report suspected crimes to police. So far, it’s been downloaded more than 40,000 times and has been used to send in more than 6,800 tips.

2011 was seen by many as a low point for Puerto Rico. Not only did homicides peak, but the FBI expanded its involvement in the U.S. territory after a Justice Department report found widespread problems in the island’s police force, including corruption, illegal killings and civil rights violations.

Seeking to crack down on the most serious crimes, the FBI and other federal agencies took charge of cases that involved armed suspects with previous criminal records. Suspects detained by federal agents are subject to being held without bond, and the system has a 97 percent conviction rate.

The FBI also expanded its authority in handling carjacking cases, a key to deterring criminals from stealing cars to commit other crimes. The bureau and other federal agencies also flew in personnel from the U.S. mainland to help bring Puerto Rico’s crime wave under control.

As a result, the island has experienced a “dramatic” improvement in public safety since 2011, said Carlos Cases, the FBI special agent in charge for the island.

For its part, the Puerto Rico Police Department last year began using a system that tracks the locations of reported gunfire in greater San Juan in order to decide where to assign daily patrols.

Puerto Rico’s drop in crime comes amid a long-term trend of declining rates of violent crime across the region. In Jamaica, killings in 2014 were the lowest in 11 years and down roughly 40 percent compared with a record 1,680 in 2009. Trinidad and Tobago saw a 27 percent drop in killings from the 2008 high of 547. And in the Dominican Republic, there were fewer than 2,000 killings in each of the past two years for the first time in more than a decade.

— Compiled by The Associated Press

Still, parts of the Caribbean remain violent as a drug-trafficking corridor awash in weapons, often smuggled out of the United States. Even in places like Puerto Rico and Jamaica where the numbers are falling, much of the crime involves gang battles or people seeking cash or valuables to feed a drug habit, like the 15-year-old mugger who attacked Romero’s son.

Romero said more remains to be done. Puerto Rico should reduce overall violent crime by 70 percent and aim for no more than 582 killings for 2016, half of that reported in 2011. He plans to continue working with police to make the island safer.