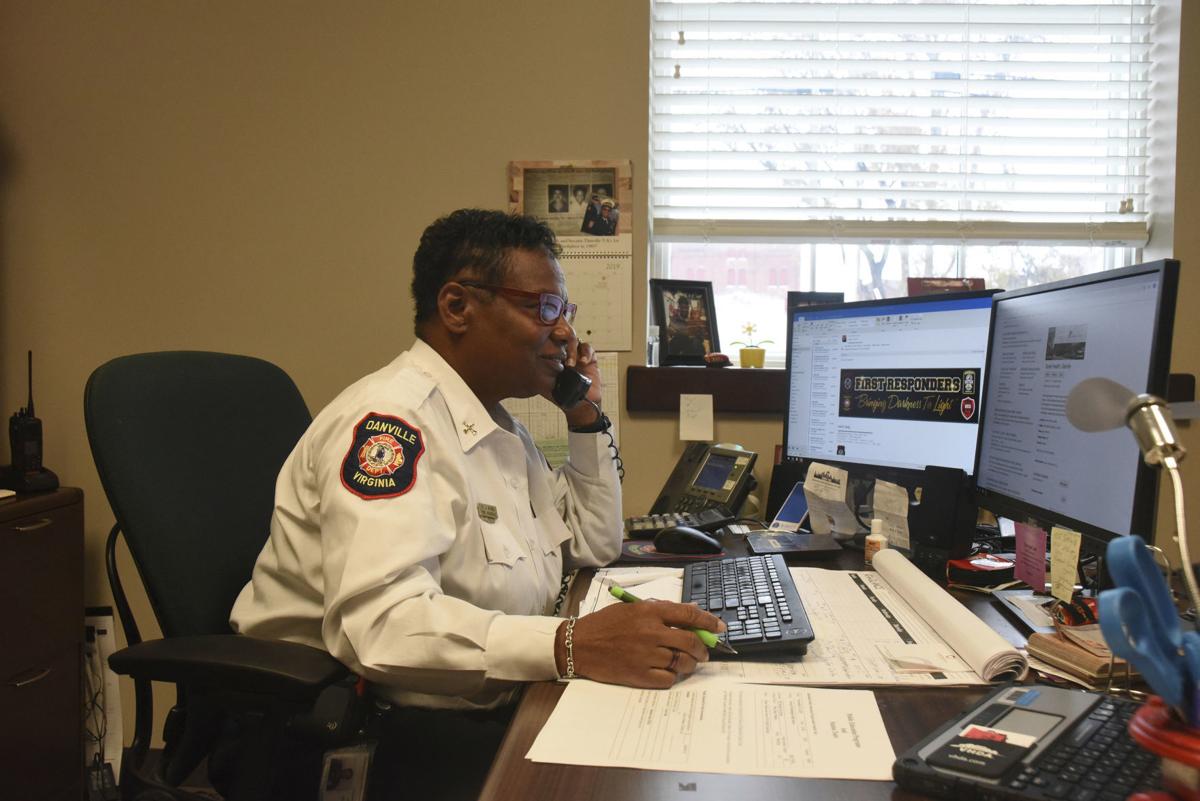 Sitting in her office in Danville, Va., Danville Fire Marshal Shelby Irving, who has been with the Danville Fire Department for more than 30 years, said that as fire marshal she is always putting on different hats and doing different jobs. 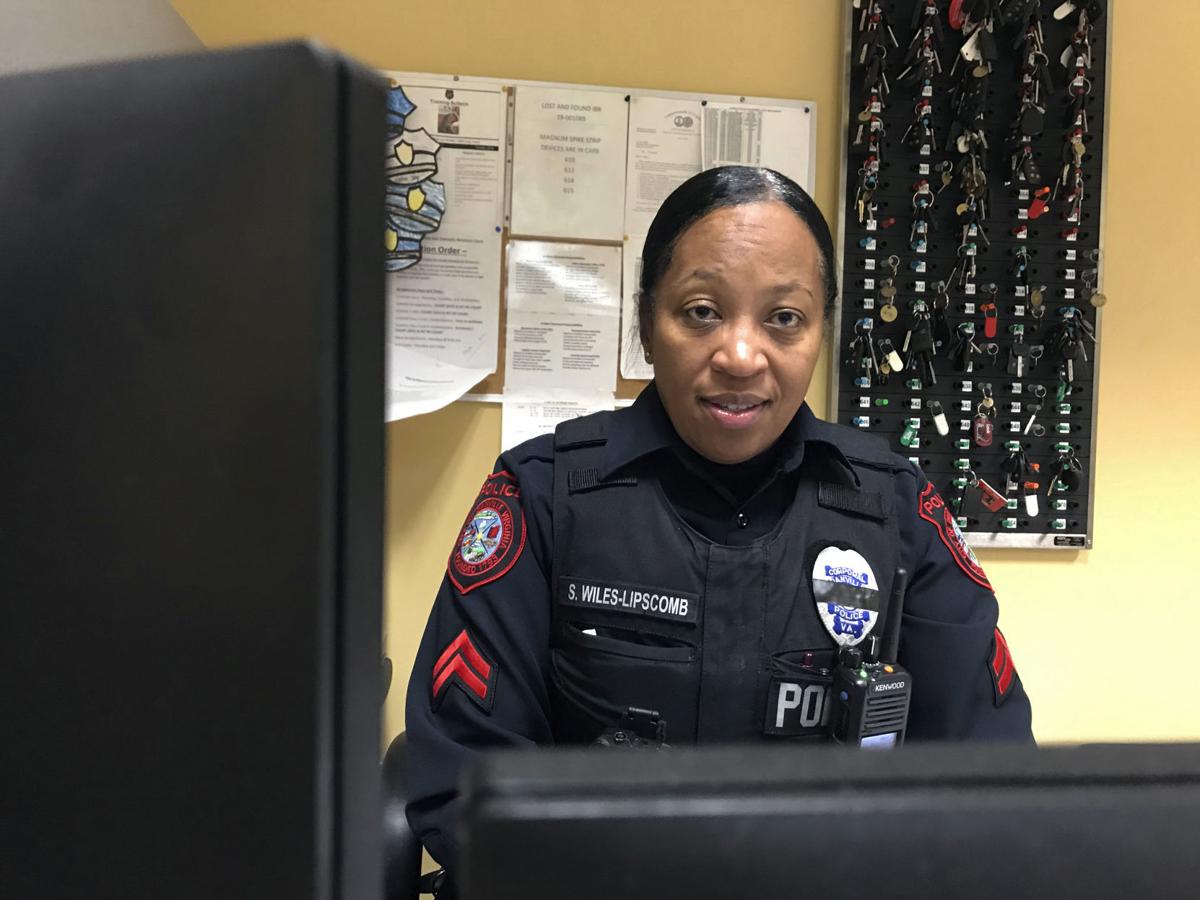 Cpl. Samanthia Wiles-Lipscomb talks about her 30-year career, in Danville, Va., at the Danville Police Department and explains that her ability to treat people well and talk to them has helped her succeed, deescalate situations and earn the respect of the community. -Caleb Ayers/Danville Register & Bee via AP 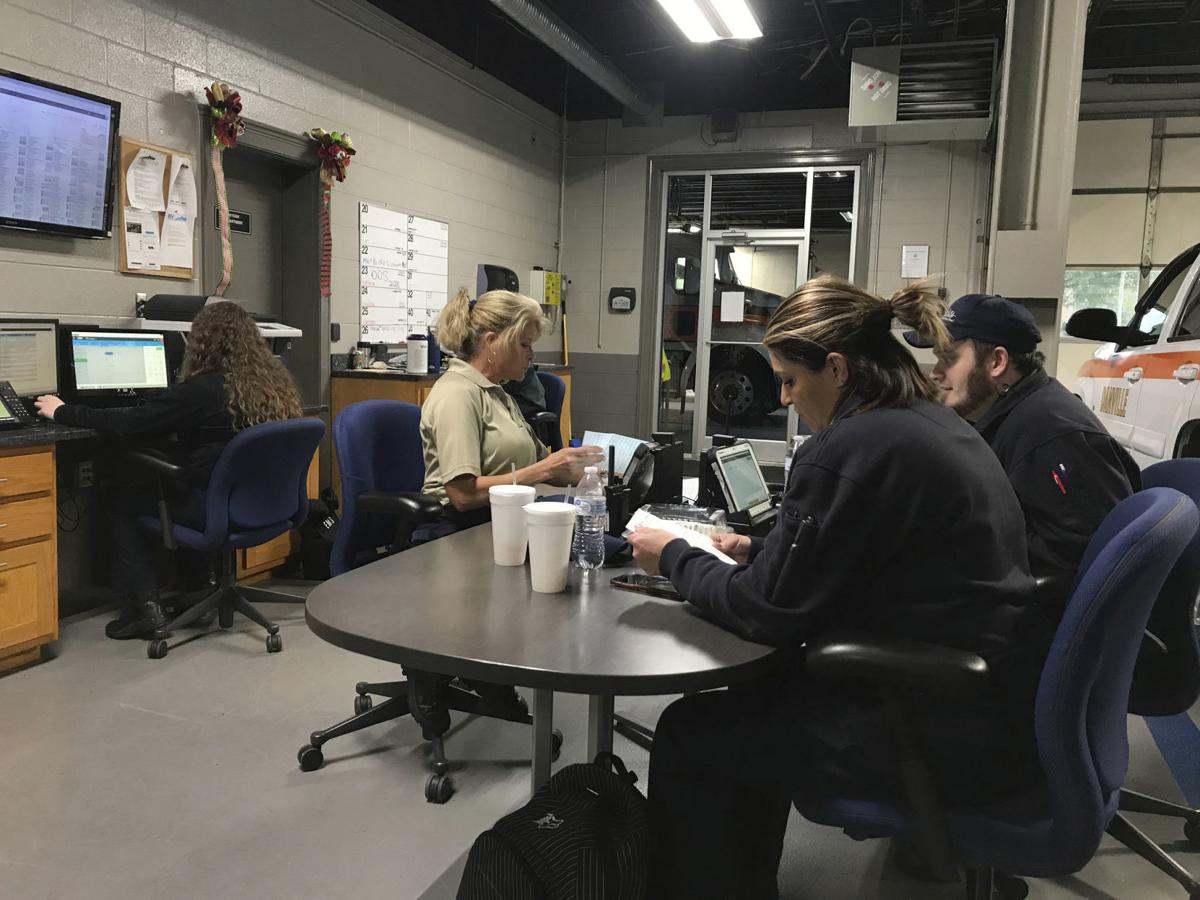 Sitting in her office in Danville, Va., Danville Fire Marshal Shelby Irving, who has been with the Danville Fire Department for more than 30 years, said that as fire marshal she is always putting on different hats and doing different jobs.

Cpl. Samanthia Wiles-Lipscomb talks about her 30-year career, in Danville, Va., at the Danville Police Department and explains that her ability to treat people well and talk to them has helped her succeed, deescalate situations and earn the respect of the community. -Caleb Ayers/Danville Register & Bee via AP

DANVILLE, Va. — It was in 1988 when the Danville Fire Department culled through 300 applications to hire a new batch of firefighters. Among those applicants, only 30 were hired and sent through an eight-week program.

Just one woman made the cut to attend the academy: Shelby Irving, an African American who was working at the parks and recreation department and coaching Averett University basketball.

With four other women joining the department over the years and then leaving for various reasons, Irving remains the only woman firefighter in the Danville Fire Department. And not only is she the sole female firefighter, but she assumed the position of chief fire marshal in 2007, making her the first female and first African American chief officer in the Danville Fire Department’s history.

In the city and across the country, female first responders and law enforcement officials are largely in the minority. In Danville, women have been slow to fill the ranks in the fire department. Women have joined the police department at a slightly faster pace. The Danville Life Saving Crew, on the other hand, has a near equal ratio of women to men.

Additionally, only 9%, or 33,624, of the nation’s career firefighters are African American, according to the report, making Irving a true rarity in the field.

Larry Gwaltney, executive director of the Virginia State Fire Association, said intimidation about the physical aspects of the job kept women away for the longest time. It remains somewhat of a deterring factor.

When Irving first joined — after a friend challenged her to try it — all she knew was that some of the fire trucks were yellow and that the 3rd Avenue station was near her house.

“I had no clue what I was getting into,” she said.

There was some nervousness among her male colleagues about including a woman during the first few years, as well as mistrust from people in the community.

“When women first started getting into fire on the career side, there were some issues on acceptance,” Gwaltney said, specifically referring to firemen’s wives being nervous about women at the stations with their husbands.

For Irving, both of those issues have faded during the years.

“I think I’m very much accepted by this community,” she said.

Being the first women to join the department and take a leadership role, Irving said during the years many people have referred to her as a trailblazer, but she’s never really thought about her career with the fire department in that way.

When Cpl. Samanthia Wiles-Lipscomb first started at the Danville Police Department 30 years ago, there only were a handful of women. Today, 17, or 14%, of the department’s 119 sworn officers, are women.

While more women have been hired as police officers across the country during the past several decades, the ranks of larger jurisdictions are filled with greater percentages of females, according to the most recent survey of local police departments from the U.S. Department of Justice, which is based on 2013 data. Nationally, cities of Danville’s size have a police force of far fewer women officers — average is a department that’s 8.8% female.

“The society is not made up of all men. We should represent the people that we serve,” Wiles-Lipscomb said.

Lt. Richard Chivvis, of the Danville Police Department, said the last batch of recent academy graduates that were hired consisted of more women than men — four females and two males.

Wiles-Lipscomb said she often attempts to recruit women for the department, but finds that they don’t want to join or don’t think that they are qualified.

She added her respect for people and ability to talk to them has helped her immensely over the years, especially with deescalating situations and preventing things from spiraling out of control in the first place.

April Campbell, an emergency medical technician, has volunteered with the Danville Life Saving Crew since 1994. When she first started, she said about 10% of the volunteers were women, whereas today the ratio is about 1-to-1. She thinks much of the reason is the overall increase of women in the workforce.

“They’re out here working just like the men,” she said.

“You have more of a caring atmosphere in the EMS world,” she said.

“(EMS) is still physically demanding, but it’s not as strenuous,” added Charlotte Newnam, a volunteer EMT with the Life Saving Crew.

Statewide, the number is much more disproportionate, with about 70%, or 24,479, of the 35,124 EMS providers are men, according to data from the Virginia Department of Health Office of Emergency Medical Services.

“In those situations, having that diversity in the truck is a real asset to us,” he said.

Irving, as the lone female firefighter for Danville, feels an extra responsibility to educate local children about the fire department and that they can be involved. She has pushed hard to recruit women into the department, but can’t seem to get them in, usually several try, with a few passing the agility test before backing out.

With consistent recruiting efforts, Irving still is trying to determine what is stopping more women from joining, especially since nearby cities as Lynchburg and Roanoke are successfully recruiting more women.

“This field is wide open,” she said. “I’m just hoping that we’ll see some changes and get some women on.”

I thought this article was interesting because of what wasn't in it. There's a few women who are succeeding and trying to bring in more women. But not much about how they recruit, who they recruit, what women would be good first responders.

The natural reaction is that successful women in these fields should know who would be good in the field and how to attract them. But after 20 years, I think even women lose the sense of what is attractive about these jobs from the outside. They get stuck in the "this is how we always did it" type of mindset.