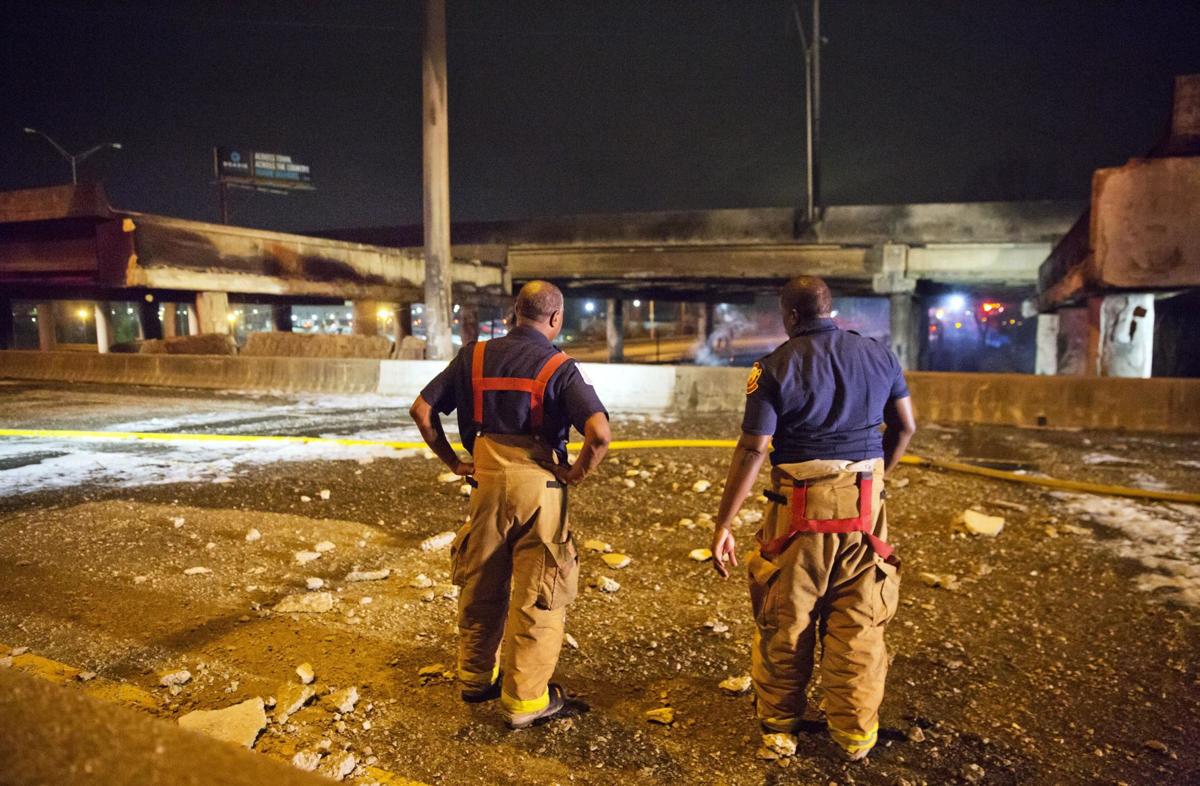 Firefighters surveyed the section of an overpass that collapsed from a large fire on Interstate 85 in Atlanta. — AP Photo/David Goldman 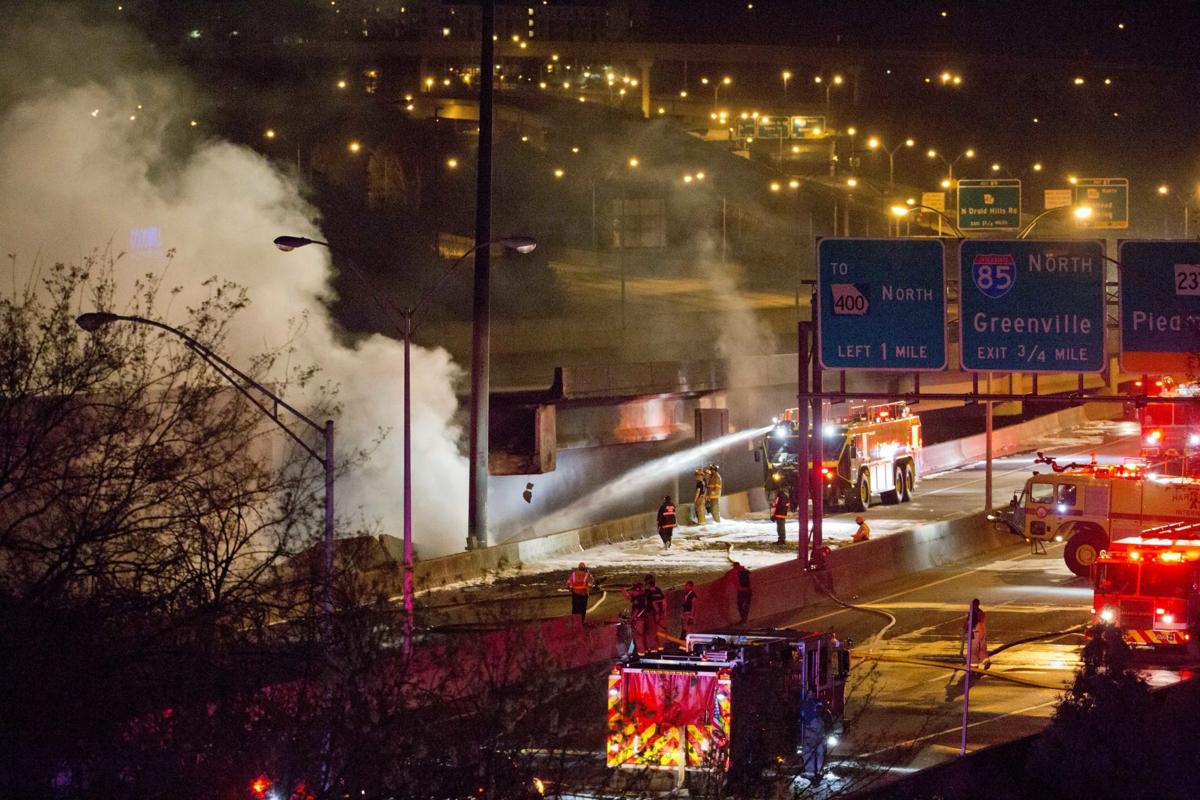 Smoke billowed from a collapsed overpass along Interstate 85 after a large fire burned for more than an hour and undermined the structure in Atlanta on Thursday.

Firefighters surveyed the section of an overpass that collapsed from a large fire on Interstate 85 in Atlanta. — AP Photo/David Goldman

Smoke billowed from a collapsed overpass along Interstate 85 after a large fire burned for more than an hour and undermined the structure in Atlanta on Thursday.

ATLANTA — The city’s notoriously tangled commutes were thrown into disarray Friday after a bridge on Interstate 85 collapsed amid a massive fire, shutting down the heavily traveled highway through the heart of the city.

Traffic was bumper to bumper on nearby streets as people scrambled to find alternate routes after the fire broke out during rush hour Thursday afternoon. However, officials said no one was hurt despite towering flames and plumes of smoke captured in dramatic video footage.

“This is about as serious a transportation crisis as we can imagine,” Atlanta Mayor Kasim Reed said.

Because of the damage to the key interstate, many commuters in some of Atlanta’s densely populated northern suburbs will likely be forced to find alternate routes or ride public transit for weeks or even months.

Georgia’s top transportation official said there’s no way to tell when the highway, which carries 250,000 cars a day, can be safely reopened to traffic in either direction following the collapse in the northbound lanes leading out of the city.

“We will have to continue to evaluate the situation and adjust as we do,” Department of Transportation Commissioner Russell McMurry said. “This incident — make no bones about it — will have a tremendous impact on travel.”

McMurry said Friday in a news release that bridge inspectors have determined the southbound lanes of I-85, adjacent to the section that collapsed, also were damaged by the fire and will need to remain closed for the near future.

Bobby Barnhart, who works for a financial technology company near the interstate, said he and his colleagues watched the bridge collapse from about 60 yards away as the fire raged Thursday afternoon. He said he heard several explosions beneath the bridge, followed by a slow rumbling.

“It was a big sound. You could feel the vibrations,” Barnhart said.

With the interstate closed, Barnhart said his Friday morning commute was much more jammed than usual, taking him about 30 minutes rather than the normal 10 to 15.

The interstate is a major artery for the U.S. South and a thoroughfare for traffic heading north and south through Atlanta. The bridge collapse effectively “puts a cork in the bottle,” Georgia State Patrol Commissioner Mark McDonough said.

For some motorists, Thursday’s snarl brought back nightmares from a winter storm in January 2014 that left drivers stranded on interstates and highways overnight and children trapped on school buses. During that storm, many abandoned their cars and slept in convenience stores or restaurants that opened their doors to commuters seeking shelter.

The Metropolitan Atlanta Rapid Transit Authority, or MARTA, increased rail service Friday and will have additional staff on hand to help passengers figure out how to get where they’re going.

Thursday’s fire burned for more than an hour under I-85 northbound, spewing clouds of black smoke skyward. The interstate was shut down and the Department of Transportation warned all motorists to stay off I-85.

Rose Diggs told The Atlanta Journal-Constitution that she lives less than a mile from the fire site but couldn’t get home because of blocked surface streets. She said she was told to walk despite being disabled, “but it’s raining and dark.” — (AP)

Capt. Mark Perry of the Georgia State Patrol told the newspaper terrorism is not suspected.

Atlanta Fire Department spokesman Sgt. Cortez Stafford said no cars were on the overpass when it fell.

“Our guys got here quickly and shut down the interstate and said, ‘No one else is driving over this bridge,’” he said. —