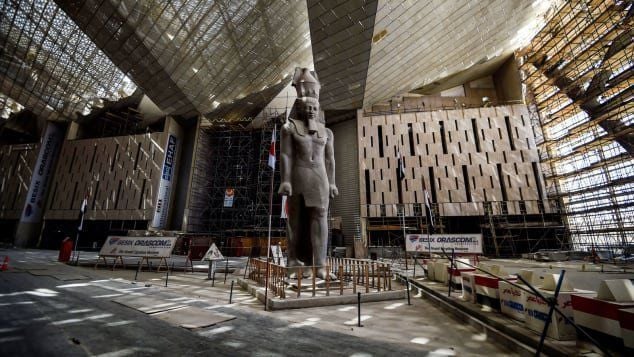 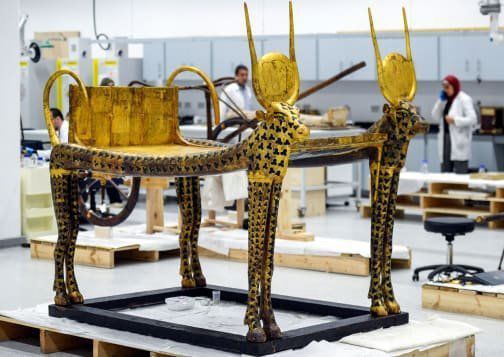 The Grand Egyptian Museum had received 46,000 artifacts as of April, with more coming. 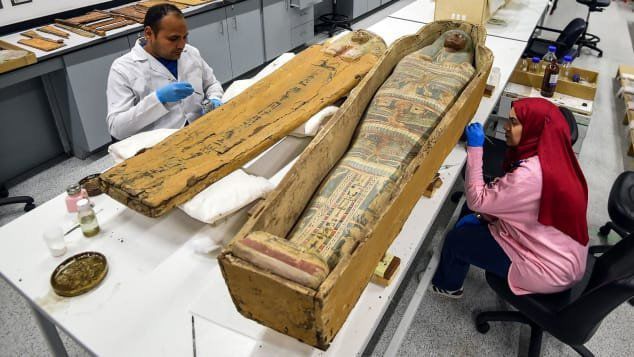 The Tutankhamun collection is going through the restoration process at the museum’s conservation lab.

The Grand Egyptian Museum had received 46,000 artifacts as of April, with more coming.

The Tutankhamun collection is going through the restoration process at the museum’s conservation lab.

Standing just 1¼ miles away from the pyramids of Giza, the monument, which will house some of Egypt’s most precious relics, is expected to attract around 5 million visitors a year.

More than a decade in the making, and with its opening being pushed back once again in 2018, there’s one “secret” way travelers can visit the 5.2-million-square-foot structure before it officially launches in 2020.

A private behind-the-scenes tour of the $1 billion project is currently in operation — albeit with a $250 price tag.

Grand Egyptian Museum international relations representative Faten Mohammad is one of the leaders of the tour, which lasts four hours and runs every day. CNN Travel joined one of her tours earlier this year.

After running through the center’s tight security measures — no photographs unless authorized and absolutely no touching — Mohammad opens the door to the organic lab.

His refurbished necklaces, shoes and even a loincloth (yes, King Tut’s underwear) are shown without the typical glass casing.

While one third of the Egyptian pharaoh’s artifacts were previously on display at Cairo’s Egyptian Museum, the GEM is to house all 5,000 known objects.

“We will display the collection of King Tut in one place for the first time since we discovered the tomb in 1922,” says Mohammad. “His treasures will be displayed in two halls of about 7,000 square meters.”

Officials plan to arrange the pieces to look as they did when British archaeologist Howard Carter discovered King Tut’s tomb in Luxor in 1922.

But the draw of this high-priced expedition is the chance to privately witness the inner workings of one of the world’s largest museums.

“When Carter discovered [King Tut’s] tomb, he tried to conserve the artifacts by covering them in wax. We discovered this has bad effects,” she says.

“Our colleagues try to remove wax before they’re displayed. When we removed the wax [on a chariot of King Tut], we discovered new scenes we didn’t see before.”

As visitors peruse the decorated gold chariots — smartphone photos are allowed at this point — Mohammad continues with the Egyptian trivia.

“We have three funeral beds of King Tut made for his afterlife journey,” she says, gesturing towards a set of intricate wooden structures.

“When we made a photo scan, we discovered the black color you see isn’t actually black. It’s Egyptian blue [an ancient pigment now commonly known as cerulean].”

King Tut did not use these beds during his reign in 1300 BCE — they were solely for his death.

The beds have carvings of the goddess Ammit, a hippopotamus representing divine retribution, and the cow goddess Hathor, who Egyptians believed helped deceased souls transition into the afterlife.

This working lab houses granite, limestone and basalt statues, as well as remains from temples all over Egypt.

The goal is to clean and support these massive artifacts before moving them to the museum’s main entrance.

“All huge objects will be displayed along the grand stairs in the museum,” Mohammad says. “A Ramses II [statue] is in front of the main entrance; beside him all over the stairs you will see more than 87 huge objects.”

The museum was set to open in 2012. Then came the Egyptian revolution.

Due to security concerns and dwindling funds, the government stopped construction from 2011 to 2014, according to GEM representative Basma Yusuf.

As the project ramped back up with loans from Japan, officials predicted a partial opening in 2018, which then became 2019.

But in late 2018, news broke that it had been postponed once again, with a 2020 opening date announced this time.

Since then, the GEM and select guide partners have been taking small private groups through the museum’s entrance and restoration facilities as a way to help fund the $1 billion project.

The GEM curated its 100,000 total artifacts from Egypt and beyond; 20,000 of those will be on display for the first time.

Officials moved many pieces from the cramped Egyptian Museum due to the 117-year-old facility’s lack of space. This staple in central Cairo’s Tahrir Square will now focus on art.

The entrance’s nearly 2,000-foot-tall translucent façade is designed to subtly mirror the nearby pyramids.

A palm-fringed “Nile Park” will pay homage to the life-giving river through peaceful fountains.

While the building looked sparse on the April 2019 tour, it’s progressing more quickly than meets the eye.

In February 2019, the Minister of Antiquities Khaled al-Anani announced the museum was 88% ready, according to the Egyptian Independent newspaper.

As guests walk toward the entrance, Yusuf talks through the interactive children’s museum and the GEM’s new solar panels — it will be the first Egyptian museum to use solar energy. At this point, though, visitors are pretty distracted.

Even Ahmed, the Explore Egypt Tours guide, is too mesmerized by the 83-ton Ramses II statue to focus.

This red-granite colossus was originally discovered in Memphis in 1820. It was restored in Cairo in 1954 and served as a beacon in the city’s Bab Al-Hadid square for decades.

The government moved it to Giza for safekeeping in 2006, with Ramses II arriving safely in his new home, the GEM’s nearly finished entrance atrium, in January 2018.

With cranes, jackhammers and makeshift fencing surrounding us, this encounter with the 39-foot-tall colossus peaceful is far from peaceful.

But given the GEM expects to draw millions of tourists annually, this raw, crowd-free moment with the ancient Ramses II is well worth the price of admission.